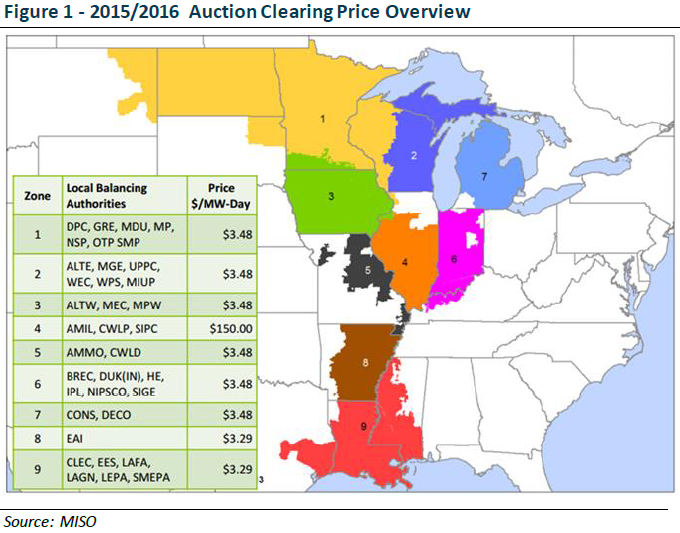 On December 31, 2015, the Federal Energy Regulatory Commission (FERC) issued an order directing the Midcontinent Independent System Operator (MISO) to make changes to the capacity auction rules, including requirements to stop relying on PJM Interconnection prices to set maximum bids and increase the amount of electricity available in the Illinois market area. FERC found that the $155.79/MW-day maximum bid for MISO's 2015/16 capacity auction was too high and that MISO did not accurately calculate electricity exports.

The FERC Order requires MISO to set a $0/MW-day reference level to replace MISO's current practice of allowing offers based on the estimated opportunity cost of exporting capacity. It also requires MISO to implement revisions to consider counter-flows created by capacity exports to neighboring regions.

The Order responds to multiple complaints that the results of MISO's 2015/16 capacity auction held in April 2015 were the product of market manipulation and were unjust and unreasonable for Zone 4, which covers Central and Southern Illinois. The price per megawatt-day for capacity in this region increased from $16.75 to $150.00 per megawatt-day -- a nine-fold increase from the 2014/15 auction result and up to 40 times greater than clearing prices in other MISO zones, which averaged only $3.75.

Consumer advocates, including Illinois Attorney General Lisa Madigan, have stated that utility customers should receive millions in refunds if FERC investigation reveals violations in MISO's 2015/16 capacity auction. The FERC Office of Enforcement is conducting a formal, non-public investigation into whether market manipulation occurred before or during the 2015/16 auction. FERC stated that it will determine the appropriate action in a subsequent order.