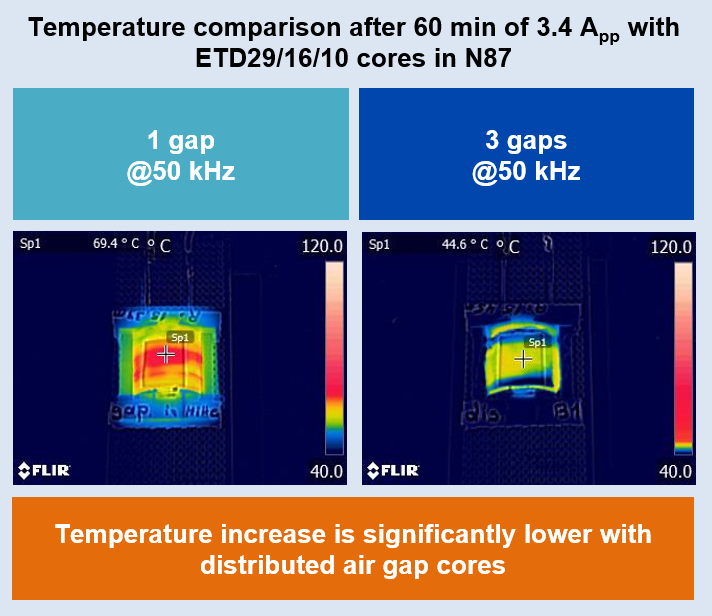 It is fascinating to learn about successful companies like Amazon, Apple, Google, HP and Harley Davidson that started in their founders’ garages. Each started as a hobby business, innovating upon decades-old technology, expertly tailoring the technology into custom solutions for their customers. Over time, these companies standardized their customized offerings, gradually becoming Fortune 500 companies.

In a similar vein, the technology behind distributed gap cores has been around for nearly 30 years. Distributed gap cores are primarily used to increase power handling capability, enable higher currents, and improve the efficiency and thermal performance of magnetics. Yet, these solutions have always been an expensive, highly-customized solution – until now. TDK is innovating the standardization of Distributed Air Gap Cores in a way that is revolutionizing how the market will specify, purchase, and adopt these crucial components.

The Need for Air Gap Cores

Before Distributed Air Gap Cores were readily available, many engineers would implement designs with a large single air gap. This had several limiting factors because the large fringing flux emitting from the air gaps would spread into the winding area. This leads to copper losses, thereby leading to a rise in temperature and proximity losses in high-frequency magnetics.

As a result, the usable winding area is limited. Distributed Air Gap Cores address these issues by providing the following benefits:

·  Increased Power Density and Optimized Efficiency:Distributed air gaps increase the power handling capability of the design. In many cases the winding area is reduced to avoid fringing flux losses. By using distributed gapped cores (minimizing the fringing flux) the full winding area can be used. This can allow for either a smaller component or higher power through the originally selected component.

·  Enhanced Performance:In some cases, Litz wire is used to address the losses generated from fringing flux. Since Distributed Air Gap cores reduce the effects from fringing flux there is the potential to use solid wire instead of Litz wire. This would allow for higher copper utilization of the winding area, resulting in higher efficiency and lower costs.

Distributed Air Gap Cores have seen significant innovation in the above categories over the past few years. However, each time a solution is created it has been tailored and delivered specifically for the design of the end application.

An unfortunate side effect of this is that each time a core is created for a custom application, it likely will not be used again for another design, increasing the overall cost of the technology, and preventing new innovations from being passed on to others.

TDK solutions also offer one of the best total costs of ownership and cost/performance ratios, due to reliability and reduced proximity losses. This becomes extremely apparent when a single gap core is compared to various configurations of distributed air gaps.

As a pioneer in magnetics, TDK is the first to offer standard Distributed Air Gap Core solutions. TDK continues to invest in the future of magnetics and to support this introduction. The company has invested heavily in new automated manufacturing processes and equipment that improve the quality of air gapped core products.

TDK is revolutionizing how the market will specify, purchase, and adopt Distributed Air Gapped Cores with new standardized products. TDK offers the market easy access to a once highly customized distributed gap ferrite core solution. Manufacturing innovation is allowing the industry to take advantage of the technology in new ways. Additional innovation will follow, just as it does whenever a custom solution is standardized. Welcome to the revolution.