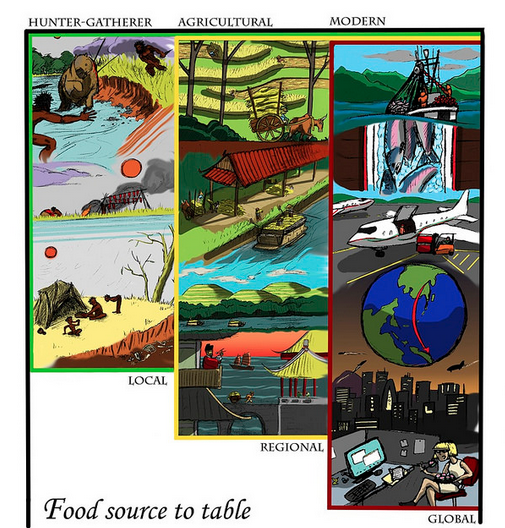 Ongoing efforts to feed a growing global population are threatened by rising fossil-fuel energy costs and breakdowns in transportation infrastructure. Without new ways to preserve, store, and transport food products, the likelihood of shortages looms in the future.

In an analysis of food preservation and transportation trends published in this week’s issue of the journal BioScience, scientists warn that new sustainable technologies will be needed for humanity just to stay even in the arms race against the microorganisms that can rapidly spoil the outputs of the modern food system.

“It is mostly a race between the capacity of microbe populations to grow on human foodstuffs and evolve adaptations to changing conditions and the capacity of humans to come up with new technologies for preserving, storing, and transporting food,” wrote lead author Sean T. Hammond, a postdoctoral researcher and interdisciplinary ecologist in the College of Forestry at Oregon State University.

The authors note that increased energy use in food-preservation systems does not always prolong shelf life. For example, drying and canning tend to use less energy than freezing, which requires ongoing energy consumption. Moreover, as cities expand and food is produced by fewer people, dependence grows on fossil-fuel transportation systems. The cargo ships, trucks and trains that carry most of the world’s food run almost exclusively on oil.

“Getting food from the field to your table is a matter of production, storage and transportation,” said Hammond. “It sounds trivial to say that, but if there’s a problem with any of those – a drought, problems with roads or problems keeping foods cool and dry for storage during transport – the system breaks down and people starve.

“More people moving to cities means there are fewer people working to produce food, which means we need to use more energy in the form of machinery to grow and harvest things,” Hammond noted. “Problems with bridges, rail and port infrastructure increase the time needed to transport food and lead to even more energy needed to keep food from spoiling while it is transported.”

Technological advances in preservation and transportation systems have improved the diversity and nutritional qualities of food over what was available to pre-industrial societies. Nevertheless, it’s been estimated that up to 40 percent of the food produced in the United States is lost or wasted. The estimate is lower in developing countries, about 10 percent, due to different diets and cultural norms.


In their analysis, Hammond and his colleagues considered the growth of microorganisms on food products as temperatures increase in storage; the shelf life of foods such as fish, potatoes, strawberries and wheat; the amounts of energy used in preservation methods; and historical advances in the transportation of different foodstuffs.

“As humans push up against the limits of the finite Earth,” they wrote, “food security is a major concern.” To meet future needs, decreasing numbers of farmers, ranchers and fishermen will need to become more efficient and productive. In short, they will need to produce more food per acre and use less fossil-fuel energy, Hammond and his co-authors write.

Innovations that use other energy sources will be required in preservation, storage and transportation systems. The issue is particularly acute in tropical areas where higher average temperatures and humidity translate into faster rates of food spoilage than in temperate climates.

“We can transport any food, even foods that spoil quickly like fish or fruits, to any point on the surface of the planet before it goes bad,” Hammond said. “That’s pretty amazing, but I think we need to question whether we should. Maybe the local-food movement is less of a trend in modern society and more of a necessity.”

Researchers conducting the analysis received support from the National Science Foundation, the National Institutes of Health and the James S. McDonnell Foundation.