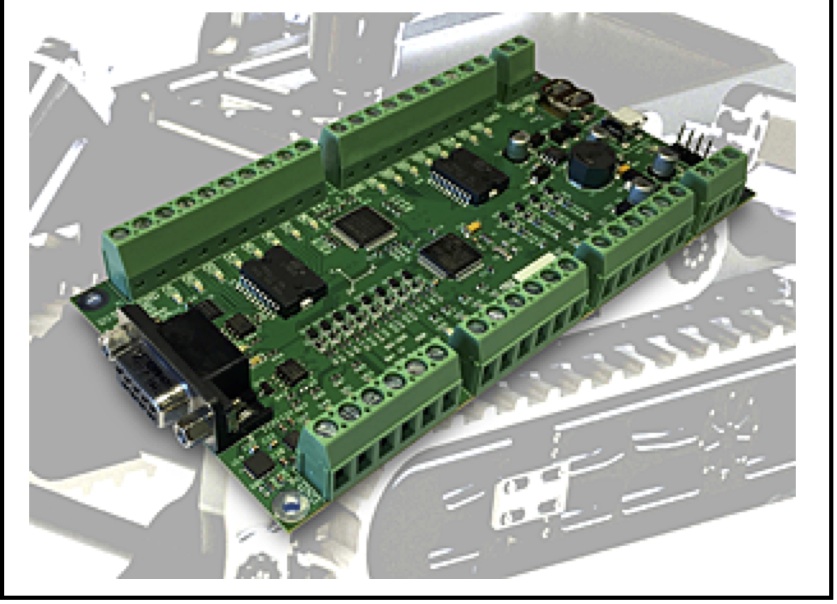 Roboteq introduces an intelligent I/O expansion card, with an optional Inertial Measurement Unit (IMU - also known as an AHRS - Attitude and Heading Reference System). The card is intended for use in robotics navigation, unmanned vehicles, machine control, industrial automation and any other applications that need interfacing to the real world.

The Roboteq IO eXtender module (RIOX), seamlessly integrates with PC's via its USB interface, or with PLCs via its CANbus or RS485 interface. RIOX also directly interfaces with most Single Board Computers, such as Aduino, Raspberry PI, or Beagle Boards. RIOX can drive, or be driven by, all Roboteq Motor Controllers.

The module includes a 32-bit ARM MCU for processing and buffering the I/O, and managing the communication with the host PC/PLC/SBC, motor controllers and/or other components of the system. The processor can be configured to perform, on its own, a long list of conversion, capture, filtering, or conditioning on the I/O. The ARM processor also read the 3 axis accelerometer, gyroscope, magnetometer, and performs the fusion algorithm in the AHRS version of the RIOX

A simple and powerful Basic-like programming language is built into the card and allows users to write programs that process the I/O in real time. The RIOX module therefore also be used stand-alone similarly to a PLC.
The module features 12 inputs, each of which can be individually configured as digital, 0-5V analog, or as pulse inputs. In the pulse mode, the inputs can capture pulse width, frequency, duty cycle, or quadrature encoder counts. Each input pin can also be configured as a driver for RC servos or as interface for ultrasound distance sensors.

The RIOX module has 16 Digital Outputs capable of driving resistive loads such as lights, or inductive loads such as relay, solenoids or motors up to 1A each at 40V. Each output can be used as Input as well. The RIOX module uses screw terminals to ensure easy insertion and removal while providing a most reliable connection.
The RIOX module’s firmware can easily be updated in the field to take advantage of new features as they become available

The RIOX is available now at $175 and $295 in the Basic and AHRS version respectively.