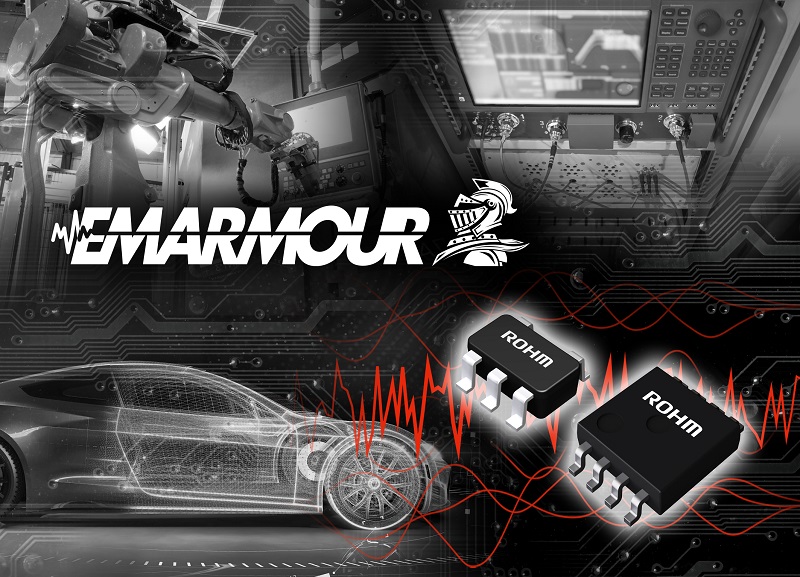 In recent years, advancements in electrification and mounting density have increased the amount of environmental noise in electric vehicles and cars equipped with ADAS. Generally, however, it is extremely difficult to carry out noise evaluation on individual boards and systems during automotive development. Therefore, it has to be performed after assembly. Moreover, some results require improvements such as large-scale EMI countermeasures to lower noise.

In response, ROHM released the EMARMOUR series in 2017 that have since been well received in the automotive and industrial markets due to their superior noise immunity that reduces design resources by combining a vertically integrated production system with proprietary analog design technology.

The EMARMOUR series is designed to prevent malfunctions due to noise without the need to take special application measures. The latest BD8758xY series in particular, has demonstrated superior performance under four international noise evaluation tests. For example, in ISO 11452-2 radio wave emission testing conducted by vehicle manufacturers, the output voltage of standard products fluctuates by more than ±300mV in all frequency bands, while the new BD8758xY series achieves ±10mV or less. At the same time, the CMOS element structure enables accurate, high-speed signal amplification – without being affected by external noise when installed inside the targeted sensor applications. This significantly improves reliability while reducing design production-hours in a wide range of applications, including anomaly detection systems.