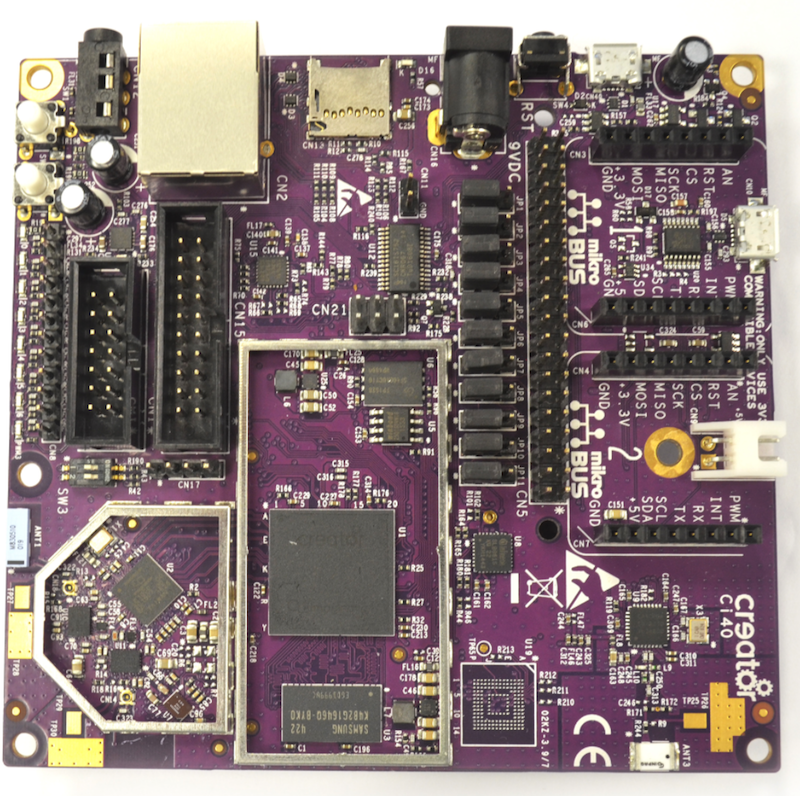 RS Components (RS) announced availability of the Creator Ci40 and Ci20 IoT development kits http://uk.rs-online.com/web/c/semiconductors/semiconductor-development-kits/processor-microcontroller-development-kits/?searchTerm=creator from Imagination Technologies. The Creator kits include the hardware, software and cloud infrastructure required to quickly build a wireless IoT system. Built on open industry standards, the Creator IoT framework is supported by an ecosystem including reference software and projects available at http://creatordev.io

The Creator Ci40 IoT hub includes a high-performance and low-power microcomputer board that has a subsystem optimised specifically for the development of IoT applications. The cXT200 SoC in the subsystem integrates a dual-core dual-threaded MIPS processor running at 550MHz together with the Ensigma connectivity engine, which covers super-fast 802.11ac 2x2-MIMO Wi-Fi as well as Bluetooth Classic, low-energy Bluetooth Smart and 6LoWPAN wireless communication technologies. The Creator Ci40 board also features a raft of I/O headers and standard interfaces, allowing users to add a wide choice of existing accessories or expansion boards.

In addition to the computer board, the Ci40 ‘IoT in a box’ kit comes with two battery-powered MikroE 6LoWPAN Clicker expansion boards with a mikroBUS socket, enabling the addition of sensors; and three Click companion boards, each respectively offering a temperature sensor, motion sensor and relay switch.

The Creator Ci20 computer board, features the 1.2GHz JZ4780 dual-core mobile application-processor from Ingenic Semiconductor, which runs at 1.2GHz and delivers excellent multimedia capabilities. The JZ4780 SoC integrates a dual core MIPS CPU from Imagination as well as the company’s PowerVR SGX540 graphics processing engine that supports OpenGL ES 2.0 graphics and up to 1080p video decoding at 30 frames per second. The board also offers 1-Gbyte of RAM, Wi-Fi and Bluetooth connectivity, and a host of peripherals including GPIO, SPI, I2C, ADC and UART interfaces, enabling enormous flexibility for developing IoT projects.

The Ci20 supports a wide range of Android operating systems including KitKat, Lollipop and Marshmallow, together with a wide choice of Linux distributions, and is supplied with Debian installed. The Ci40 also supports a wide choice of operating systems including Linux distributions such as OpenWrt and Debian, as well as Brillo, the IoT-optimised OS from Google.

The Creator Ci20 and Ci40 are available and shipping now from RS in EMEA and Asia Pacific.