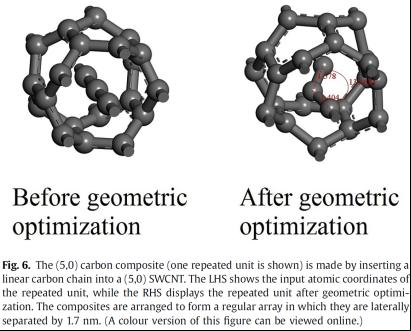 This is the geometric structure 'a carbon chain in a tube' before and after optimization.

Scientists from Ural Federal University (UrFU) together with their colleagues from Lomonosov Moscow State University found out the mathematical method to calculate the temperature at which single walled carbon nanotubes became superconductors and developed a way to increase it thus opening new prospects for superconductive materials application. The work was published in Carbon journal.

Superconductivity is the basis of high-tech. Materials that are able to conduct electricity in full without any power losses due to the absence of resistance are used in cyclotrons, magnetic trains, power lines, and super-sensitive magnetometers (devices used to measure the Earth's magnetic field). Still, the main issue with superconductivity is that it is expressed at temperatures slightly above absolute zero (-273°C). If a material is superconductive around -70°C, it is aiming at a record. The leader among all materials is hydrogen sulfide frozen under incredible pressure - it becomes a superconductor at -70°C.

"Room temperature superconductivity is the dream of humanity. For example, your mobile phone does not need to recharge anymore and the electricity can run forever," says Dr. Chi Ho Wong, a postdoc of Ural Federal University and a co-author of the work.

The ability of carbon to form flat, one atom thick graphene sheets (separate graphite layers) has been attracting the attention of scientists for a long time. If we roll such a sheet to make a tube, we will get another interesting structure - a single walled carbon nanotube (SWCNT). These structures are highly tensile, refract light in an unusual manner and may be used in many areas from electronics to biomedicine. Atoms inserted in the walls of such tubes may change their properties, including conductivity. It may depend on the orientation of hexagons that form the carbon layer, on the filling of the tube, or on additionally inserted or attached atoms of other elements.

Single walled carbon nanotubes are being actively studied as prospective superconductors. However, their diameter equals only 4 angstroms (four tenth of a nanometer), therefore they are close to 1D materials. At temperatures close to absolute zero the so-called Cooper pairs of electrons are formed in them. In the lack of curvature it prevents the formation of Cooper pairs, and no superconductivity is observed.

"Our task was to change the 1D structure in order to increase the temperature of superconductive transition" comments Anatoly Zatsepin, the head of a scientific research laboratory at Institute of Physics and Technology, UrFU. "It turned out that if you pile SWCNTs up, Cooper pairs stabilize, and a superconductor is formed." Still, even such piles require quite low temperatures to exhibit superconductive properties - only 15 degrees above absolute zero.

Physicists found a solution for this issue as well. They added a one atom wide carbon "wire" inside SWCNTs. The chain itself does not form bonds with the atoms of the tube, but it makes the tube change its own geometry and flex.

When the team from UrFU changed the shape of the internal carbon chain from straight to zigzag-like, they managed to increase the temperature of superconductivity transition by 45 degrees. To achieve the best effect, the angles of zigzags were mathematically calculated, and the predictions proved to be correct.