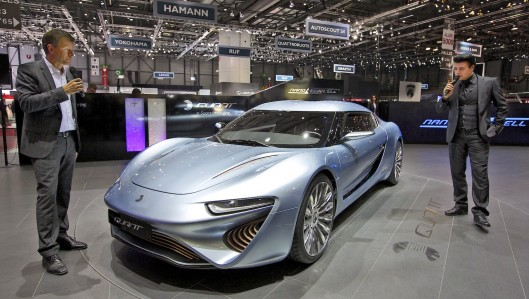 After making a debut at the 2014 Geneva Motor Show, the Quant e-Sportlimousine has received approval from Germany's TÜV Süd. The car, which uses an electrolyte flow cell power system, is now certified for use on German and European roads.

Everything about the scene suggested that it might very well have been the last we heard of the NanoFlowcell Quant e-Sportlimousine. Promises of a magic bullet of energy storage, made by a three-month-old company, packaged with outlandish numbers like 0-62 mph (100 km/h) in 2.8 seconds and a top speed of 236 mph (380 km/h), hinted, rather strongly, that this car's technology and performance would only exist on paper. Given that a similarly outlandish Quant car, centered in a similar black-walled booth, introduced by a very different Nunzio La Vecchia company, had vaporized years earlier, it seemed a responsible assumption that the e-Sportlimousine would do the same.

Just a few months after its debut, however, the car has resurfaced and taken a step forward. After an in-depth inspection of the car, the German TÜV Süd in Munich handed over the official registration plate this week. Now the company will be able to test the car on public roads in Germany and Europe as it prepares it for series production.

"We are delighted as pioneers to be able to present an automobile driven by flow cell technology on public roads, and one which achieves not only fantastic performance values but also zero emissions," said Le Vecchia, tossing out a slightly revised set of numbers, including "a projected top speed of over 350 km/h (217.5 mph), acceleration from 0-100 in 2.8 seconds, a torque of four times 2,900 Nm (2,139 lb-ft) and a range of more than 600 km (373 mi)."

The flow cell system powering the Quant e-Sportlimousine's four electric motors develops electricity from an electrochemical reaction created by two electrolyte solutions. This electricity is forwarded to super capacitors where its stored and distributed.