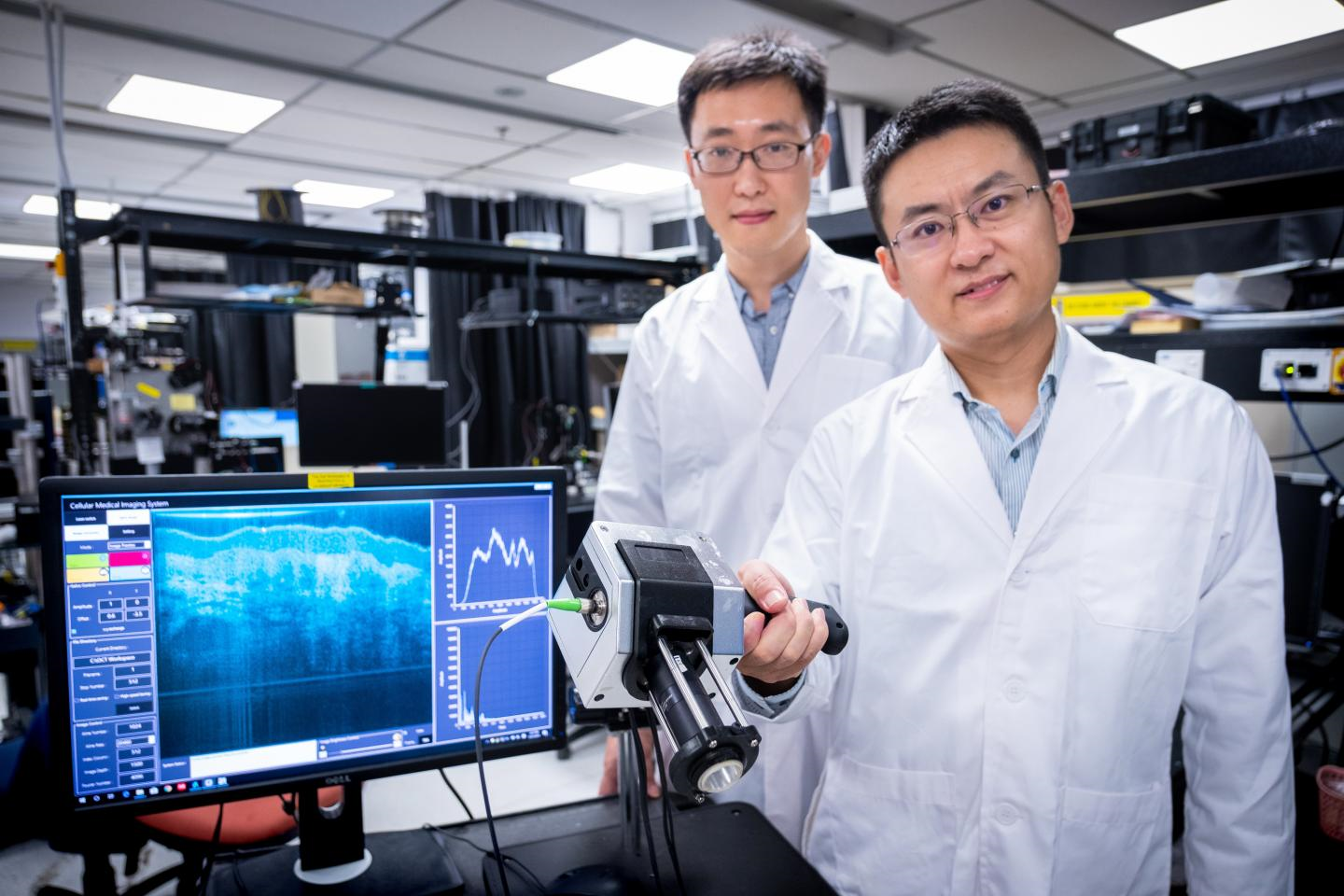 (from R-L): Assoc Prof Liu Linbo and one of his researchers Dr Xinyu Liu from NTU Singapore, have developed the prototype of a handheld medical imaging device, which produces images 100 times higher resolution than what X-Ray, computed tomography (CT) and Magnetic Resonance Imaging (MRI) machines can provide.

Scientists at Nanyang Technological University, Singapore (NTU Singapore) have developed the prototype of a handheld medical imaging device that can produce images down to resolutions of 1 to 2 micrometres.

This is detailed enough to spot the first signs of tumours in specific cells and is about 100 times higher resolution than what X-Ray, computed tomography (CT) and Magnetic Resonance Imaging (MRI) machines can provide.

The technology behind the device is a result of six years of optical imaging research and was jointly developed by a team from NTU with researchers at the Harvard Medical School and the University of Alabama, U.S.A.

Relying on a new imaging technology known as micro 'Optical Coherence Tomography' (OCT), the device emits a spectrum of light between 700 to 950 nanometres, known as near-infrared light. This harmlessly penetrates human tissue and organs, and the device then measures the delay time of the 'echo' from its light waves as they strike different tissue structures. This information will then be used to construct cross-section images of what is being scanned.

The results are sent in real-time to a computer system running software developed at NTU, which assists in diagnosis by assembling the 2-D cross-section images into a three-dimensional picture and rendering different parts in colour.

The NTU researchers say that their prototype was designed to be used by medical professionals who do not specialise in imaging or pathology, allowing them to scan patients using the new device in clinics or at the bedside. Patients would not face the inconvenience of waiting for MRI or CT scanner availability and requiring attendance at a specialised facility.

NTU Associate Professor Liu Linbo, who led the research team, said, "Our device is a fraction of the size of existing machines and produces clear, high-resolution images in real-time. It uses light to harmlessly penetrate the skin, and it does not involve specialised lead-shielded X-ray equipment or MRI scanners. It is small enough to be handheld, so images could be captured by the bedside."

The prototype device has undergone clinical trials at Wuhan University's Endoscopic Centre, and has shown promise in detecting abnormal colon polyps to the same level of accuracy as trained pathologists.

During the preliminary trial at the Renmin Hospital of Wuhan University, endoscopists used the device on 58 tissue samples from patients known to have colon polyps - abnormal growths in the colon or rectum. The samples were imaged in real-time by the device, and its assessment of whether they were malignant or benign was found to be 95 per cent accurate after comparison with an evaluation of the same samples, by senior pathologists. These findings were published in Clinical and Translational Gastroenterology in June 2019.

A key promise of the micro-OCT device is its potential ability to spot the first signs of cancers of the colon, stomach and skin, which begin in the nuclei of epithelial cells measuring about 1-2 micrometres. Epithelial cells are part of the barrier between the inside and outside of the body (i.e. lining inside the throat, intestines, blood vessels, and organs) and are almost impossible to image using current machines that cannot penetrate beyond half a millimetre.

"It is our hope that in future, doctors might be able to use a device like ours to precisely identify diseases as they develop at the cellular level, in real-time, and in high resolution," said Assoc Prof Liu. "Through earlier detection, we believe that patients will receive an earlier diagnosis and if necessary, get treatment faster."

Not involved in the study, Dr Eng Soo Yap, a Consultant Haematologist at the National University Hospital in Singapore, said, "This is a ground-breaking technology that could have widespread clinical applications. These range from real-time imaging of tissues at a microscopic level to even detecting circulating cancer cells in the blood. All this could lead to early and more accurate detection of cancer. An additional advantage is that being a portable device, it could be used at the bedside, clinics and even in patient's homes which would extend the accessibility of this technology and cut down on waiting time."

Prof Liu and his team are conducting more in-depth research into OCT technologies, to further improve the device and extend industry collaboration with other healthcare companies.