Scientists Discover how a Pinch of Salt can Improve Battery Performance 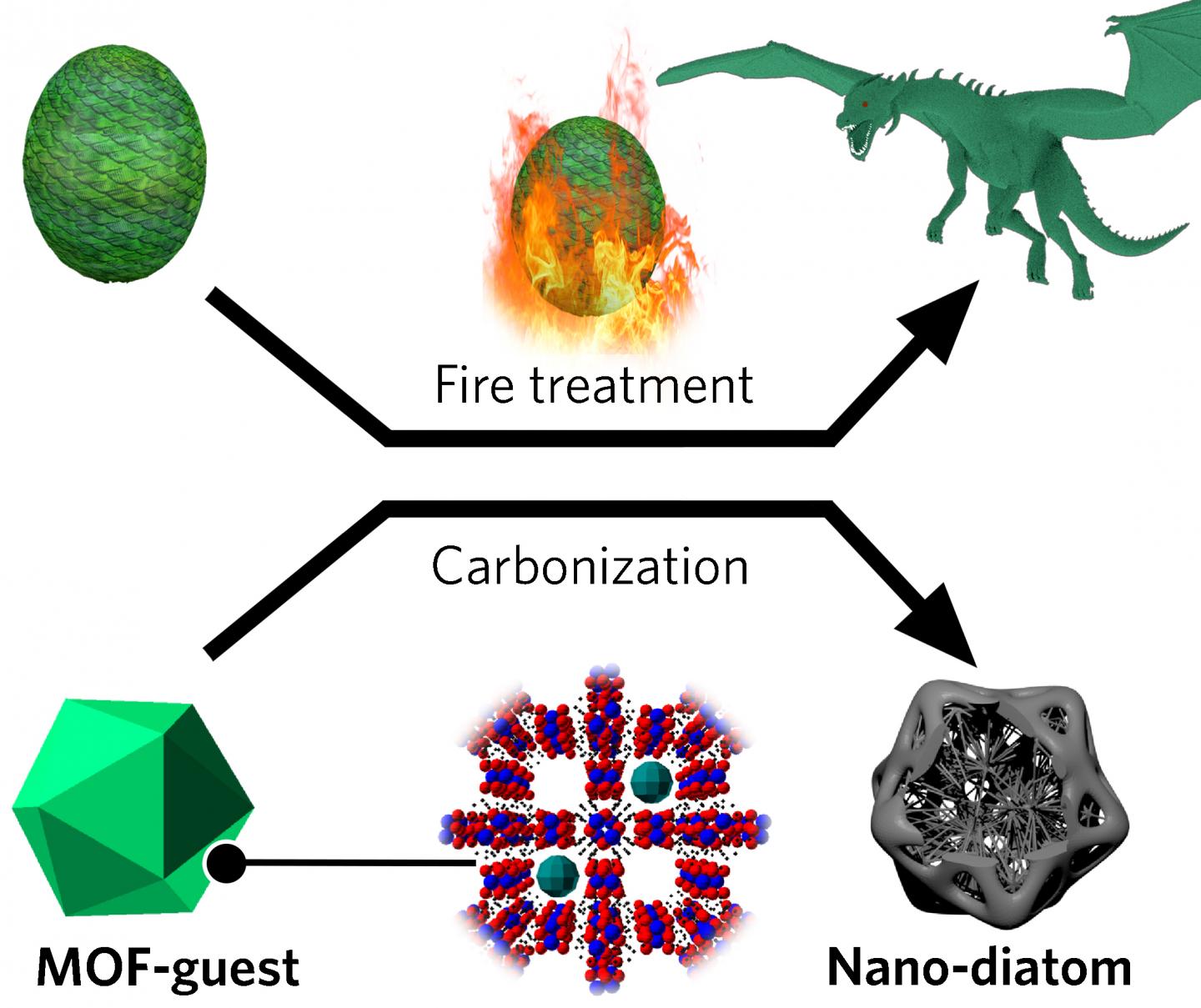 When the MOF is carbonised it transforms into a nano-diatom, much like a dragon egg turns into a fire-born dragon after fire treatment in Game of Thrones.

Researchers at Queen Mary University of London, University of Cambridge and Max Planck Institute for Solid State Research have discovered how a pinch of salt can be used to drastically improve the performance of batteries.

They found that adding salt to the inside of a supermolecular sponge and then baking it at a high temperature transformed the sponge into a carbon-based structure.

Surprisingly, the salt reacted with the sponge in special ways and turned it from a homogeneous mass to an intricate structure with fibres, struts, pillars and webs. This kind of 3D hierarchically organised carbon structure has proven very difficult to grow in a laboratory but is crucial in providing unimpeded ion transport to active sites in a battery.

In the study, published in JACS (Journal of the American Chemical Society), the researchers demonstrate that the use of these materials in Lithium-ion batteries not only enables the batteries to be charged-up rapidly, but also at one of the highest capacities.

Due to their intricate architecture the researchers have termed these structures 'nano-diatoms', and believe they could also be used in energy storage and conversion, for example as electrocatalysts for hydrogen production.

Lead author and project leader Dr Stoyan Smoukov, from Queen Mary's School of Engineering and Materials Science, said: "This metamorphosis only happens when we heat the compounds to 800 degrees centigrade and was as unexpected as hatching fire-born dragons instead of getting baked eggs in the Game of Thrones. It is very satisfying that after the initial surprise, we have also discovered how to control the transformations with chemical composition."

Carbon, including graphene and carbon nanotubes, is a family of the most versatile materials in nature, used in catalysis and electronics because of its conductivity and chemical and thermal stability.

3D carbon-based nanostructures with multiple levels of hierarchy not only can retain useful physical properties like good electronic conductivity but also can have unique properties. These 3D carbon-based materials can exhibit improved wettability (to facilitate ion infiltration), high strength per unit weight, and directional pathways for fluid transport.

It is, however, very challenging to make carbon-based multilevel hierarchical structures, particularly via simple chemical routes, yet these structures would be useful if such materials are to be made in large quantities for industry.

The supermolecular sponge used in the study is also known as a metal organic framework (MOF) material. These MOFs are attractive, molecularly designed porous materials with many promising applications such as gas storage and separation. The retention of high surface area after carbonisation - or baking at a high temperature - makes them interesting as electrode materials for batteries. However, so far carbonising MOFs has preserved the structure of the initial particles like that of a dense carbon foam. By adding salts to these MOF sponges and carbonising them, the researchers discovered a series of carbon-based materials with multiple levels of hierarchy.

Dr R. Vasant Kumar, a collaborator on the study from University of Cambridge, commented: "This work pushes the use of the MOFs to a new level. The strategy for structuring carbon materials could be important not only in energy storage but also in energy conversion, and sensing."

Lead author, Tiesheng Wang, from University of Cambridge, said: "Potentially, we could design nano-diatoms with desired structures and active sites incorporated in the carbon as there are thousands of MOFs and salts for us to select."