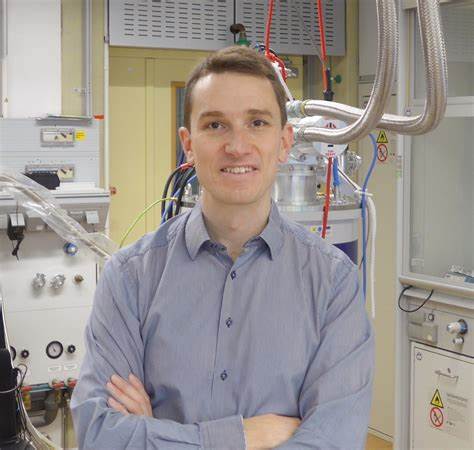 Doctor Clifford Hicks from the University of Birmingham

­An advance in the use of antiferromagnetic materials in memory storage devices has been made by an international team of physicists.

Antiferromagnets are materials that have an internal magnetism caused by the spin of electrons, but almost no external magnetic field. They are of interest because of their potential for data storage since absence of this external (or ‘long range’) magnetic field means the data units – bits – can be packed in more densely within the material.

This is in contrast to ferromagnets, used in standard magnetic memory devices. The bits in these devices do generate long-range magnetic fields, which prevent them being packed too closely, because otherwise they would interact.

The property that is measured to read out an antiferromagnetic bit is called the Hall effect, which is a voltage that appears perpendicular to the applied current direction. If the spins in the antiferromagnet are all flipped, the Hall voltage changes sign. So one sign of the Hall voltage corresponds to a ‘1’, and the other sign to a ‘0’ – the basis of binary code used in all computing systems.

Although scientists have known about the Hall effect in ferromagnetic materials for a long time, the effect in antiferromagnets has only been recognised in the past decade or so and is still poorly understood.

A team of researchers at the University of Tokyo, in Japan, Cornell and Johns Hopkins Universities in the USA and the University of Birmingham in the UK have suggested an explanation for the ‘Hall effect’ in a Weyl antiferromagnet (Mn3Sn), a material which has a particularly strong spontaneous Hall effect.

Their results, published in Nature Physics, have implications for both ferromagnets and antiferromagnets – and therefore for next generation memory storage devices overall.

The researchers were interested in Mn3Sn because it is not a perfect antiferromagnet, but does have a weak external magnetic field. The team wanted to find out if this weak magnetic field was responsible for the Hall effect.

In their experiment, the team used a device invented by Doctor Clifford Hicks, at the University of Birmingham, who is also a co-author on the paper. The device can be used to apply a tunable stress to the material being tested. By applying this stress to this Weyl antiferromagnet, the researchers observed that the residual external magnetic field increased.

If the magnetic field were driving the Hall effect, there would be a corresponding effect on the voltage across the material. The researchers showed that, in fact, the voltage does not change substantially, proving that the magnetic field is not important. Instead, they concluded, the arrangement of spinning electrons within the material is responsible for the Hall effect.

Clifford Hicks, co-author on the paper at the University of Birmingham, said: “These experiments prove that the Hall effect is caused by the quantum interactions between conduction electrons and their spins. The findings are important for understanding – and improving – magnetic memory technology.”