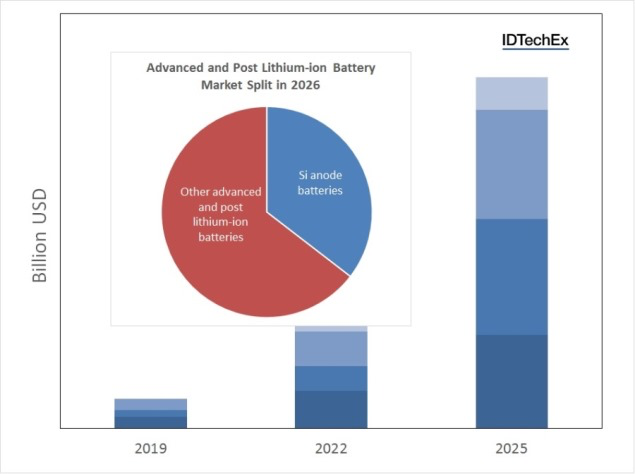 Elon Musk recently announced the use of silicon by Tesla in its automotive batteries: "This is just sort of a baby step in the direction of using silicon in the anode, but we will be increasing the use". This unusual side comment has nonetheless triggered renewed interested in the topic. IDTechEx Research has been studying the topic for some time, and finds that Si anode batteries will generate more than $4 billion in 2026, as reported in "Advanced and Post lithium-ion Batteries: Technologies, Markets, Forecasts 2016-2026".

Let's focus on what is real

The promise of silicon anodes is that they can improve the capacity of standard graphite anodes 10 times, but be careful, this is just the anode and this is just in theory. The real question is how an improvement in the anode capacity is reflected in the overall capacity of the battery.

One critical challenge facing Si anode battery technology is its short lifetime or limited cyclability. This is the case because solid silicon anodes massively expand and contract in each cycle, causing mechanical stresses that eventually crack and pulverise the anode structure.

Research has found that using composites of carbon materials with silicon reduces the mechanical stresses on the anode. In addition there is a new avenue of emerging materials and additives that can allow such stresses without destroying the anode.

The best is yet to come

After these, many material companies are jumping on this comment resulting in many old and new companies emerging again. Interestingly some of them used to work in developing silicon materials for photovoltaic technologies, but facing the commoditisation of the PV cells industry they have decided to move to the next industry: batteries.

IDTechEx Research has interviewed many such companies, finding out what has been achieved in the area. The result of this research has been published now in our new advanced and post lithium-ion battery technologies report - see www.IDTechEx.com/postlithium for further information. We spoke with Panasonic on the matter and what we can say here is what Frank Sinatra used to sing and Panasonic told us: The best is yet to come...