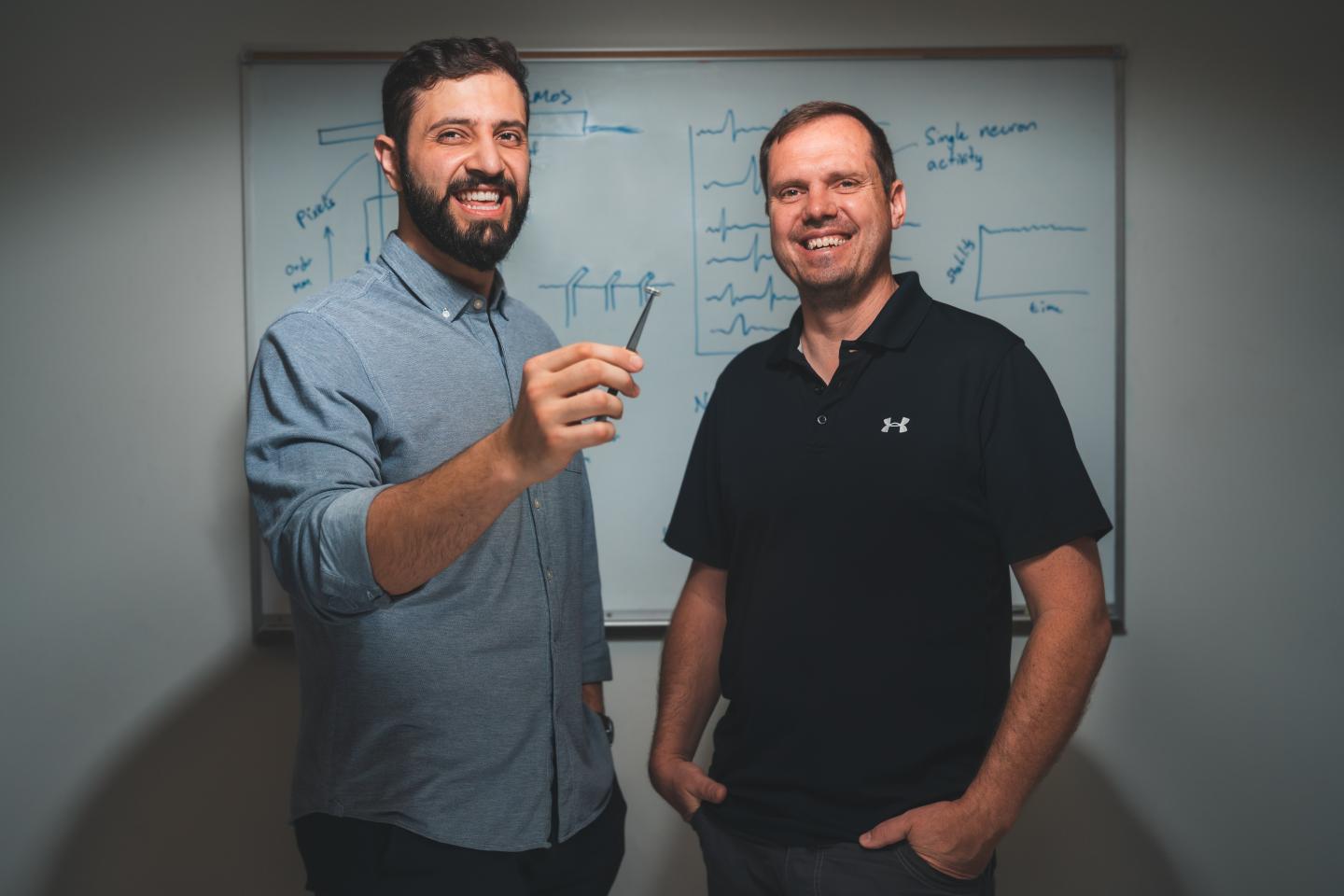 Abdulmalik Obaid (on left) and Nick Melosh with their microwire array. This bundle of microwires can enable researchers to watch the activity of hundreds of neurons in the brain in real time.

Researchers at Stanford University have developed a new device for connecting the brain directly to silicon-based technologies. While brain-machine interface devices already exist - and are used for prosthetics, disease treatment and brain research - this latest device can record more data while being less intrusive than existing options.

"Nobody has taken these 2D silicon electronics and matched them to the three-dimensional architecture of the brain before," said Abdulmalik Obaid, a graduate student in materials science and engineering at Stanford. "We had to throw out what we already know about conventional chip fabrication and design new processes to bring silicon electronics into the third dimension. And we had to do it in a way that could scale up easily."

The device, the subject of a paper published March 20 in Science Advances, contains a bundle of microwires, with each wire less than half the width of the thinnest human hair. These thin wires can be gently inserted into the brain and connected on the outside directly to a silicon chip that records the electrical brain signals passing by each wire - like making a movie of neural electrical activity. Current versions of the device include hundreds of microwires but future versions could contain thousands.

"Electrical activity is one of the highest-resolution ways of looking at brain activity," said Nick Melosh, professor of materials science and engineering at Stanford and co-senior author of the paper. "With this microwire array, we can see what's happening on the single-neuron level."

The researchers tested their brain-machine interface on isolated retinal cells from rats and in the brains of living mice. In both cases, they successfully obtained meaningful signals across the array's hundreds of channels. Ongoing research will further determine how long the device can remain in the brain and what these signals can reveal. The team is especially interested in what the signals can tell them about learning. The researchers are also working on applications in prosthetics, particularly speech assistance.

The researchers knew that, in order to achieve their aims, they had to create a brain-machine interface that was not only long-lasting, but also capable of establishing a close connection with the brain while causing minimal damage. They focused on connecting to silicon-based devices in order to take advantage of advances in those technologies.

"Silicon chips are so powerful and have an incredible ability to scale up," said Melosh. "Our array couples with that technology very simply. You can actually just take the chip, press it onto the exposed end of the bundle and get the signals."

One main challenge the researchers tackled was figuring out how to structure the array. It had to be strong and durable, even though its main components are hundreds of minuscule wires. The solution was to wrap each wire in a biologically-safe polymer and then bundle them together inside a metal collar. This assures the wires are spaced apart and properly oriented. Below the collar, the polymer is removed so that the wires can be individually directed into the brain.

Existing brain-machine interface devices are limited to about 100 wires offering 100 channels of signal, and each must be painstakingly placed in the array by hand. The researchers spent years refining their design and fabrication techniques to enable the creation of an array with thousands of channels - their efforts supported, in part, by a Wu Tsai Neurosciences Institute Big Ideas grant.

"The design of this device is completely different from any existing high-density recording devices, and the shape, size and density of the array can be simply varied during fabrication. This means that we can simultaneously record different brain regions at different depths with virtually any 3D arrangement," said Jun Ding, assistant professor of neurosurgery and neurology, and co-author of the paper. "If applied broadly, this technology will greatly excel our understanding of brain function in health and disease states."

After spending years pursuing this ambitious-yet-elegant idea, it was not until the very end of the process that they had a device that could be tested in living tissue.

"We had to take kilometers of microwires and produce large-scale arrays, then directly connect them to silicon chips," said Obaid, who is lead author of the paper. "After years of working on that design, we tested it on the retina for the first time and it worked right away. It was extremely reassuring."

Following their initial tests on the retina and in mice, the researchers are now conducting longer-term animal studies to check the durability of the array and the performance of large-scale versions. They are also exploring what kind of data their device can report. Results so far indicate they may be able to watch learning and failure as they are happening in the brain. The researchers are optimistic about being able to someday use the array to improve medical technologies for humans, such as mechanical prosthetics and devices that help restore speech and vision.