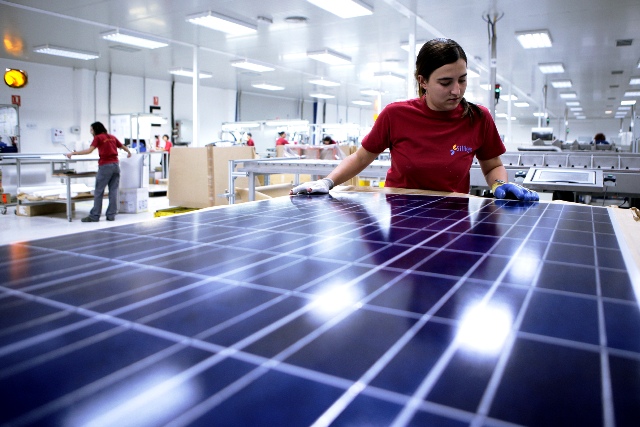 Sunlight is the most plentiful natural resource. Because the sun is not subject to the same supply limitations as fossil fuels and it is available nearly everywhere, it is increasingly being used as a free, clean source of renewable energy. Our engineers at Siliken Renewable Energy work to help harness this abundant resource and address escalating environmental and energy concerns. As a company, we have grown to become one of Spain's largest manufacturers of photovoltaic (PV) solar panels, which we use to convert sunlight into electricity. Siliken differs from other PV module manufacturers because we handle all aspects of solar panel development including silicon purification, panel manufacturing, verification, and installation. NI products play an important role in our research and development process to innovate and produce new technologies and to test every solar panel we produce. Optimizing the Silicon Purification Process The typical silicon purification process consists of converting the chemical element to a silicon compound, which we can more easily purify by distillation than in its original state, and then converting that silicon compound back into pure silicon. At our facilities, we use a novel, patented silicon purification process that may become 40 percent cheaper than traditional methods such as the Siemens process. To further increase the efficiency of our new process, we began optimizing the standard control equipment already in place at the facility that we built using the NI PXI platform, LabVIEW FPGA Module, sound and vibration software, and vision software. Because we purify the silicon at temperatures hotter than 1,000 °C, we used an NI PXI-1422 digital image acquisition module to acquire images of the purified silicon particles as they are fed out of the purification reactor. Next, with NI vision software, we conduct a remote analysis of the images to measure the size of large amounts of purified particles as they are produced. At the same time, we need faster control loop rates to measure the flow and pressure parameters of the purified silicon. Using the NI PXI-4472 dynamic signal acquisition module, we can monitor vibration levels to ensure that they never surpass predefined security levels, thus avoiding system instability that could cause the reactor to break. We chose to use the highly integrated LabVIEW and NI PXI platform and conducted two separate critical tasks using a unified solution. Solar Panel Manufacturing and Quality Testing When we began manufacturing solar panels, our end-of-line test system consisted of a boxed scope that we used to perform manual testing. With our new PC-based system based on LabVIEW and an NI PCI-6220 multifunction M Series data acquisition (DAQ) board, we integrated the "closing" of the solar modules into a semiautomatic process. Using a LabVIEW front panel as the human machine interface (HMI) and the DAQ board to help perform the operation, this application essentially "closes" the module once the solar cells are inside. After we assemble the solar panels, we must perform I-V characterization tests to verify the power output of every module to ensure that each one produces the stated power. Performing these tests is rather complex because we have to administer a known quantity of light to each panel so we can simultaneously determine both the voltage and current draw of the panel. To accomplish this, we developed a method that only uses a single 10 ms pulse of light. When the light pulse is administered, we acquire the I-V of the panel to calculate its power in watts. Because of the abstraction provided by LabVIEW and the tight integration with hardware, we were able to develop this system in less than two months, including the mechanical and electronic design, software development, and prototype assembly. This would have been impossible to achieve with other languages or products in such a short amount of time. Using NI CompactRIO, LabVIEW FPGA, and an NI PCI-6122 S Series multifunction DAQ board, we performed these tests with greater accuracy and significantly increased our throughput. In the past, we conducted this process using multiple sequential tests. In addition, while the previous I-V curve we used consisted of 30 points, we now use more than 2,000 points for I-V characterization testing, thus providing more precise calibration parameters. As a result, we received recognition for providing the best advertised-to-actual performance ratio for panel output. Beyond Solar Panel Manufacturing When Siliken first started in 2001, we used PLCs and C programming which made every development slow and rigid. When I joined in 2004, we started using LabVIEW and saw an enormous increase in productivity. We were able to design, test, and introduce new products into the production line in record time. In addition to solar panel production, we are also manufacturing essential equipment such as solar panel inverters, which are used primarily to change direct current to alternating current via an electrical switching process. We prototyped these solar panel inverters using LabVIEW, NI CompactRIO and an NI TPC-2006 touch panel computer. Finally, we are also using LabVIEW and CompactRIO to conduct research in other renewable energy fields such as hydrogen fuel cells, and NI CompactDAQ for wind power. With these systems, a standard PID controller is not sufficient, and a more complex controller is needed. By leveraging built-in analysis libraries and algorithms in LabVIEW, we were able to implement advanced control algorithms such as fuzzy logic in just one day, without having expertise in this specific area of control. We were also able to leverage the integration between LabVIEW and third party tools, such as Simulink, to design and simulate the control of the electric car. With LabVIEW used across various projects, we've been able to improve our processes and systems at a faster rate. National Instruments Siliken Renewable Energy