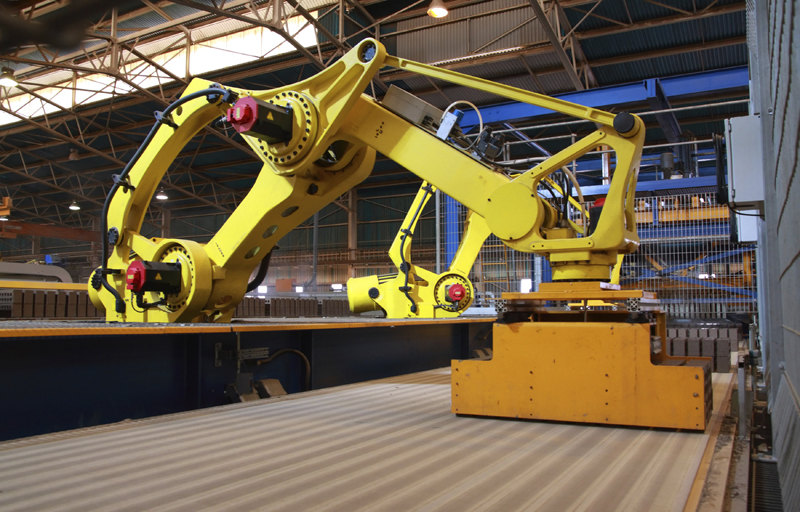 Automation is providing improvements in safety, accuracy, and convenience for many everyday applications. Consider the precision and advantages of computer-assisted surgery or the array of automation now available in automotive applications such as blind-spot detection, automatic bright-light adjustment of rear-view mirrors, back-up cameras, and parallel-parking assistance. The first sector to embrace automation, however, was the industrial segment. Major advances in robotics and factory automation have improved production efficiency and factory safety. The four major technology sectors that have enjoyed these investments are sensors, transducers, motors, and control electronics. Smart Sensors and Simple Sensors Since they lack human-like powers of observation, robotic systems need sensors to observe and interpret their environment. Consider the seemingly simple act of picking up an object (Figure 1). First, the system must locate the object. After deploying an arm, the system needs a sensor to ensure the approach toward the object. Often, another sensor signals when the system contacts the object. Gripping is an art all by itself: How much pressure is necessary to secure the object without crushing it? These actions of motion control typically involve accelerometers in conjunction with continuous position feedback from other system sensors. This simple example assumes the item is stationary and doesn't exhibit certain material behaviors such as magnetism or heat that specific types of sensors can detect. Typically, a centralized microcontroller processes the information from this network of sensors. This setup is straightforward and simple. It exhibits the clear advantages of centralized control, centralized power requirements, and simpler algorithm development. This type of system may enhance flexibility but it may also limit performance. Consider that, under certain conditions, there is a risk that the microprocessor may not be able to calculate fast enough or even to service interrupts quickly enough. These limitations can cap the achievable robotic performance. The use of smart sensors moves the decision making process to the point of interest, in this case the arm and gripping mechanism, and thus improves the system's capabilities. It also allows the automation system to control multiple simultaneous events. Remember that distributed control makes the system design more complex, but removing the central bottleneck enhances the system's capabilities.

Sensor Interfaces Technology companies have been and will continue to develop and deploy devices to propel the field of robotics forward. It is of particular interest when component vendors can integrate the sensor and related electronics into a simple-to-use, monolithic device. One of the most popular types of sensors detects proximity. These sensors are common in all sorts of consumer and communications products, ranging from vending machines, ATMs, security systems, cell phones, and leading-edge personal computers. They not only can provide positioning information, like in the robotic example, they are useful in safety systems and intrusion detection. One type of proximity sensor operates with infrared wavelengths, which are invisible to the human eye. This allows a system to monitor how close objects are without constantly blasting visible light in a variety of directions, possibly distracting people nearby. In cell phones, a proximity sensor allows the phone to detect when the user has brought it to his or her ear to engage in a phone conversation. During this time, handset can disable the screen, saving power and increasing battery life. This type of sensor-based control also prevents accidental hang-up or muting. An example of a proximity sensor for this type of application is the ISL29028A, which integrates ambient light and proximity sensors, an IR LED driver, and I2C interface (Figure 2). The ambient light sensor allows the system to reduce the screen brightness in lower light situations, which is more pleasant for the user and reduces power consumption. The IR LED driver sends out short bursts of current to an IR LED. An object within a few centimeters will reflect this signal to the proximity sensor, alerting the system to a nearby object. The ISL29028A's interrupt scheme is an example of how increasing a sensor interface's intelligence reduces the central microcontroller's load: The microcontroller needn't continually pole the sensor to search for an object approaching the phone. Instead, the ISL29028A provides an interrupt signal. If it has no other tasks, the microcontroller can even power down and wait for an interrupt such as one from the sensor interface to inform it of an approaching object. This allows for minimal loading on the microcontroller and an obvious savings in power. Smart Sensor Support To function effectively, smart sensors require interface ICs that include low-power and low-noise signal conditioning-elements. High-input-impedance instrumentation amps such as Intersil's ISL28274 provide the rail-to-rail inputs and outputs many sensor applications require. In addition, they exhibit extremely low input bias current and high CMRR necessary for strain and pressure sensing in tactile robotic applications. Another sensor-interface IC is the ISL28133 micro-power chopper-stabilized op amp. This amplifier operates on a single-supply in the range of 1.65 V to 5.5 V, drawing only 18-?A quiescent current and 8-?V (max) input-offset voltage. Since it is a chopper-stabilized op amp, it continually measures and cancels input offsets, so the input-offset temperature coefficient is just 75 nV/°C (max).The amplifier maintains a low noise floor of 1.1 ?V p-p, measured from 0.01 Hz to 10 Hz. Robotics in various forms have returned impressive gains in efficiency and productivity. This trend has been in full force, through both fast-growing and slow-growing economic conditions. The right combination of smart or simple sensors like ambient-light and proximity sensors along with precision interface devices such as instrumentation and sensor amplifiers, assures the industry of continuing innovation and productivity enhancement. www.intersil.com