Three-phase Brushless DC (BLDC) motors have become commonplace in applications such as electric fans, office automation equipment and home appliances. The nature of these applications means that not only must the motor driver dissipate as little power as possible, but it also must operate with the bare minimum of acoustic noise and little or no vibration. This has resulted in the move away from the conventional square wave control to sine wave control.

For optimum performance, sine wave control requires phase adjustment between motor voltage and motor current. However, realizing high efficiency over a wide range of rotational speed range—from almost zero rotations per minute (rpm) at start-up to high speeds of several 1000rpm—takes time and requires many parts for phase adjustment. As automation in our daily lives expands, BLDC motors are found in many applications including industrial control, automotive systems and in the office or home. Typical uses include powering electric fans, pumps in air conditioners or refrigerators or controlling the moving parts in devices such as printers.

Efficiency is a consideration in almost every application these days, either due to rising energy costs or the limited availability of power (in a battery-powered application for example). Thus BLDC motors are required to operate at maximum efficiency irrespective of the rotational speed or torque. When used in close proximity to people – especially in office or home applications - low levels of acoustic noise are another key requirement.

Some BLDC motors have sensors, allowing them to detect the absolute rotor position and supporting a higher starting torque. They also transition from high to low torque (and vice-versa) more easily. Sensor-based systems are simpler to implement – they require less software development and are generally quicker to market as engineers are more experienced in their use.

On the other hand, sensorless BLDC motors require fewer components so they are smaller and lighter. However, they are more suited to constant torque applications where a lower starting torque is needed. They also generally require more software development to get them up-and-running.

Traditionally, BLDC motor control had been achieved using pulse-width-modulation (PWM). This varied the mark / space ratio of square waves to control the BLDC motor. However, using this technique it was common for the motor current to become distorted. This, in turn, resulted in torque pulses that manifested themselves as vibration and, ultimately, acoustic noise. As technology progressed, vibration and acoustic noise became less and less acceptable, leading to a change of control waveforms from square to sinusoidal. While the early developments had a positive impact on noise and vibration, there were still some shortcomings.

In conventional ‘fixed lead angle’ BLDC motor control schemes, as the motor increases speed, the reactive component of the windings similarly increases. This causes the current in the motor to lag the voltage. The lag is proportional to the speed of the motor in RPM and the current in the windings, which is proportional to the torque. To achieve optimum efficiency, the induction voltage and motor current must be maintained in phase with each other.

The technology then evolved to automatic control of the lead angle and this offered some improvement in motor efficiency and was easier to use. However, it was a relatively complex solution that had a higher part count than the fived lead angle approach. The early auto lead angle approach also suffered from not being easily ported between motors. This mean that the lead angle had to be set for each motor based upon a variety of factors. These included motor constants and RPM. Later in this article we will look at a new approach, which does not have these shortcomings.

Semiconductor process technology has a significant role to play in advancing the technology behind motor drivers. Control ICs have improved as the silicon process has evolved from bipolar to the latest BiCD processes. These allow logic and high-voltage circuitry to be fabricated on a single chip. As a result, today’s controllers have smaller die sizes, lower power losses and are directly compatible with modern low-voltage logic devices such as the latest generation microcontrollers.

Successive BiCD process generations, moving forward from the 0.8um geometry of the late 1990’s, have driven up gate density from around 6,000 gates/mm2 to over 200,000 gates/mm2 in Toshiba’s advanced 0.13um process. This allows significantly greater logic capability in the latest motor control ICs, allowing control functionality to be offloaded from the host microcontroller. The result is simpler system software and circuit design. Compared to bipolar technology, BiCD controllers save more than 80% of the power normally dissipated thereby significantly helping to improve energy efficiency (see Figure 1). 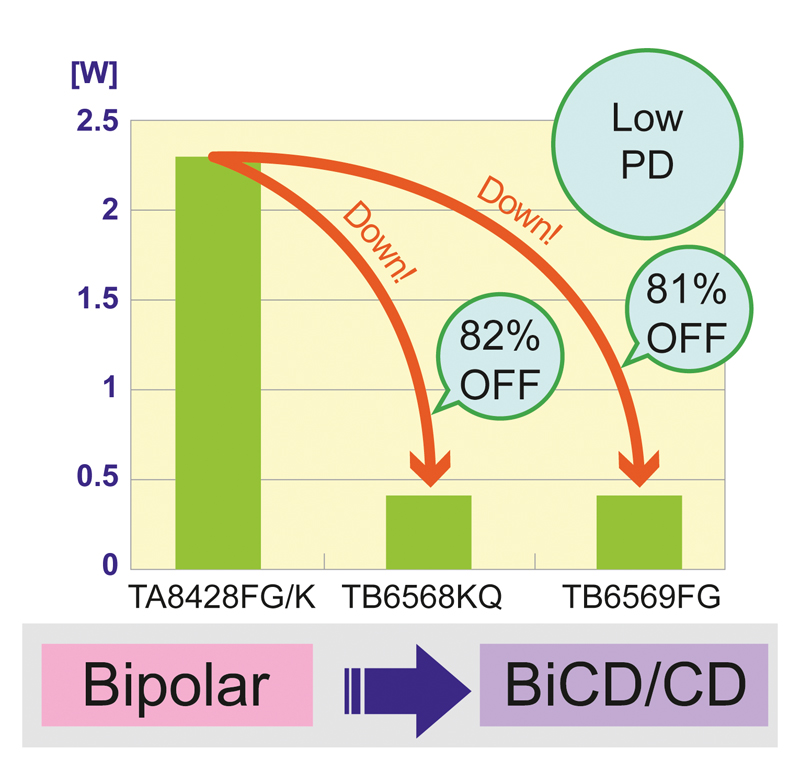 In addition, Toshiba’s 0.13µm process enables on-chip logic circuitry to operate from voltages as low as 1.5V. This allows the motor control IC to connect directly to the main controlling processor or microcontroller. This is likely to be a low voltage device with low voltage input/output lines that would otherwise require level shifting electronics between the host processor and motor control IC. 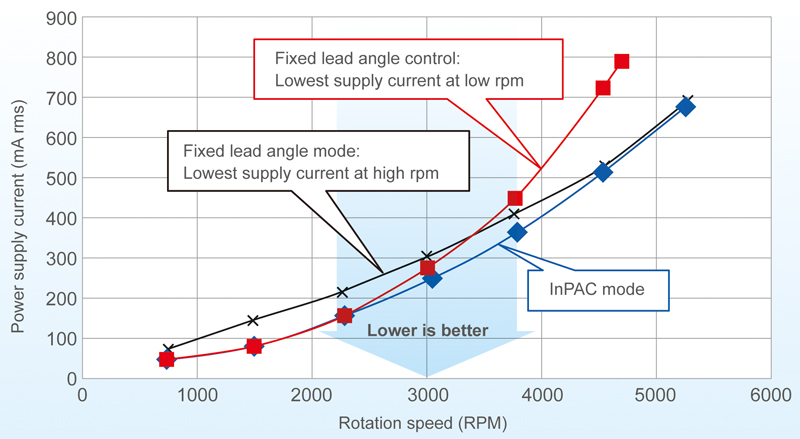 Figure 2: InPAC achieves the optimum efficiency at all rotation speeds

An IC which implements InPAC will detect the phase of the motor current and then provide control inputs to match the phases of the voltage and current automatically. With conventional sinusoidal systems the designer has to make a choice as to whether the optimum efficiency is achieved at low speed or high speed. However, with the automatic adjustment built-in to the InPAC approach the efficiency is optimised at all rotational speeds. This supports a power saving of approximately 20% over the conventional approach.

The TC78B016FTG is a single integrated solution offering a simple means to address complex issues for motor-based system designers. The sine wave drive system generates a smooth current waveform thereby ensuring lower motor noise and vibration than any rectangular wave drive system. InPAC lead angle control technology ensures that the phases of the motor current and induction voltage are always in alignment. This improves the efficiency of any motor across a wide range of rotational speeds or motor currents.

The device itself operates from a motor voltage between 6V and 30V DC and offers a current output up to 3A peak – suitable for small low voltage fans - while requiring only 6mA of supply current. Motor speed control is incredibly flexible and simple. The designer has the option of providing a simple analog voltage level or a PWM signal, selected by the SEL_SP pin. Motor direction control is achieved by pulling the CW/CCW pin high or low (see Figure 3). 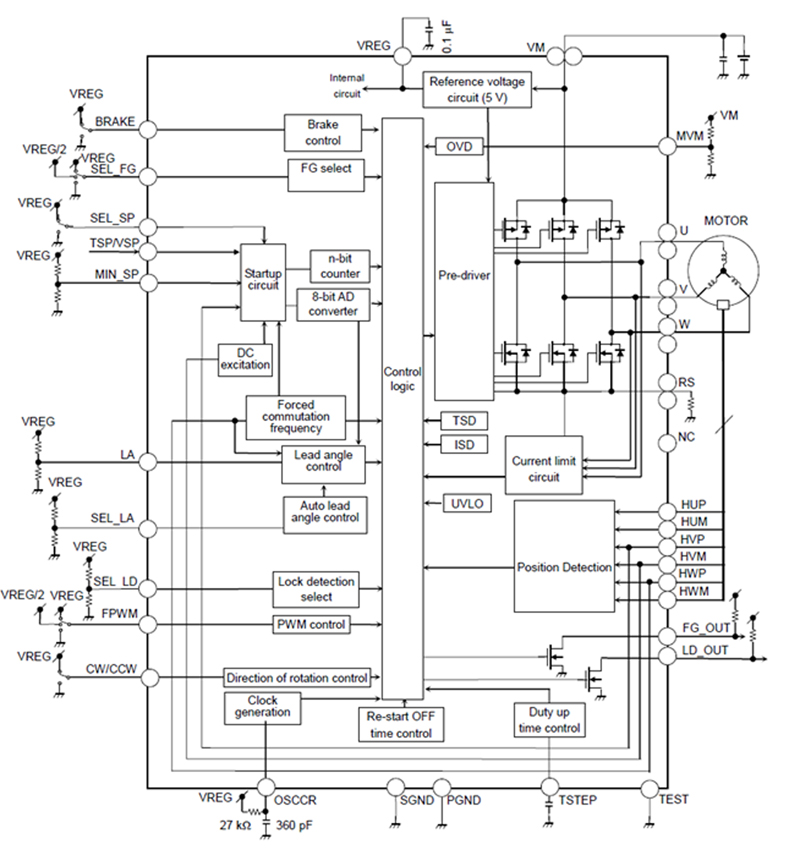 The SEL_LA pin allows for an offset of -30 to +30 degrees to be programmed using a simple analog voltage, thus adjusting for any misalignment of the Hall sensors. The TC78B016FTG has in-built provision for three externally mounted Hall sensors and an external resistor for current limit. Additional features include a soft start capability, control of acceleration and deceleration rates and braking. Safety capabilities include motor lock detection and protection as well as Thermal Shutdown, Overcurrent detection and Under-Voltage lockout.

Housed in a tiny QFN36 package measuring just 5mm x 5mm x 0.8mm, the device is small and light enough to be mounted directly to the motor assembly. This reduces the number of interconnections and the size and weight of associated connectors.