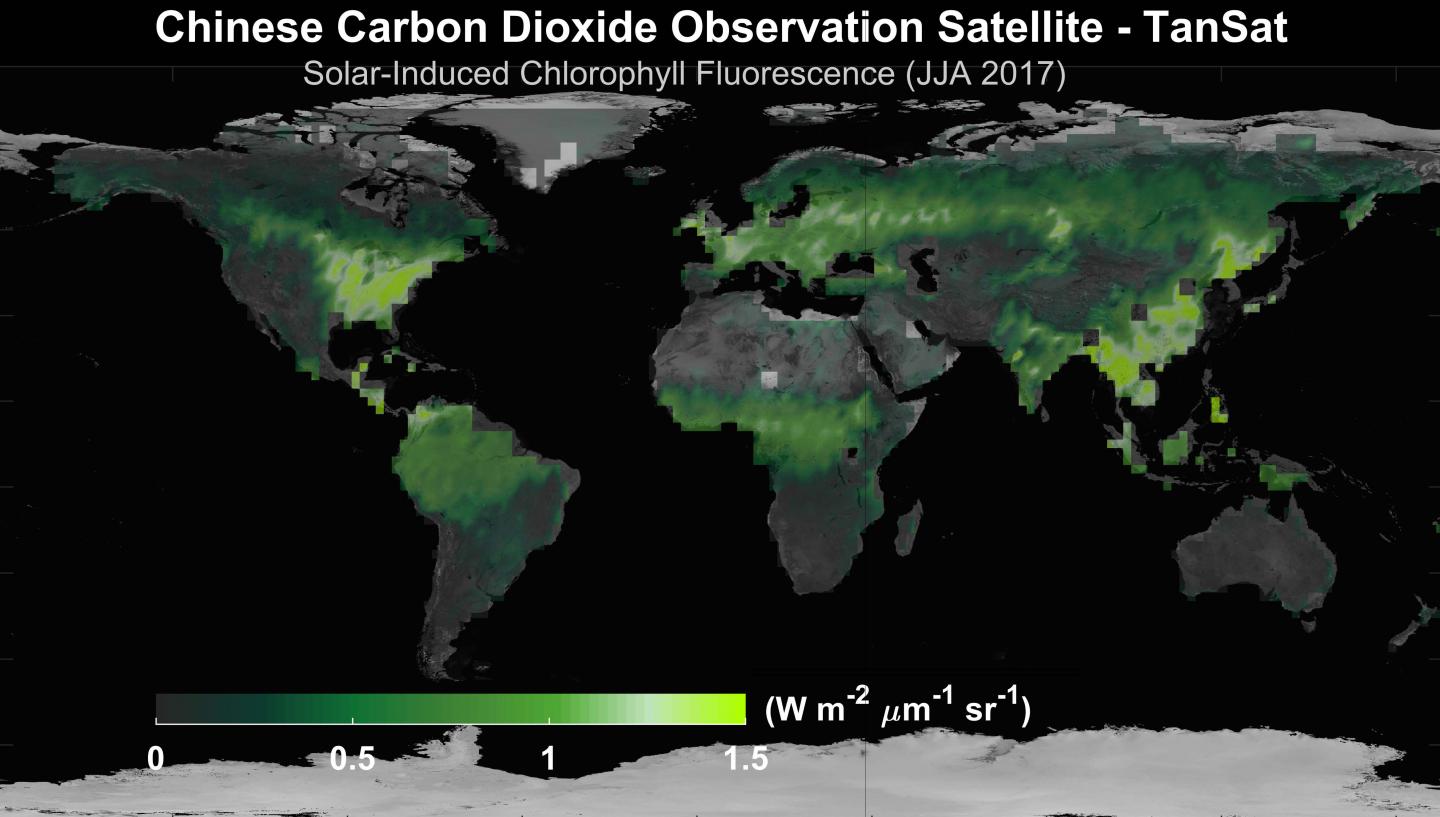 The first TanSat global SIF map was constructed using a data-driven method based on the SVD (singular value decomposition) technique.

Solar-induced chlorophyll fluorescence (SIF) is emitted during plant photosynthesis. SIF results from vegetation chlorophyll giving off red and infrared light wavelengths when excited by solar radiation. Measuring SIF is important because it is closely related to the terrestrial gross primary productivity (GPP), which calculates the total amount of carbon dioxide fixed through photosynthesis in a given area. According to many laboratory and field experiments, studies show that SIF can effectively improve estimations of GPP, which is necessary for global carbon sink research and carbon mitigation strategies.

Supported by the Ministry of Science and Technology of China, the Chinese Academy of Sciences, and the China Meteorological Administration, the Chinese Carbon Dioxide Monitoring Satellite Mission (TanSat) was launched in December 2016. TanSat monitors global atmospheric CO2 concentrations and is capable of measuring SIF.

Due to spatial scale differences, it is difficult to directly verify the accuracy and precision of satellite-measured SIF with SIF measured at the leaf or canopy scale. Much like satellite-based XCO2 products, SIF retrievals still need more comprehensive verification trials that assess precision for further carbon flux estimations.

"The intercomparison between SIF products by different algorithms can verify the reliability of the algorithms, and also provide ideas for subsequent algorithm optimization," said Dongxu Yang, the principal investigator of TanSat mission.

His team compared the TanSat SIF products provided by the new IAPCAS/SIF algorithm and the data-driven (SVD) method. Considering both scale and time, results indicate that the two SIF products agree well on a global extent thought the year. While the team noticed a slight regional bias in the SIF maps, the linear correlations between the two SIF products are strong, higher than 0.73, for all seasons. Their TanSat SIF algorithm comparison is published in Advances in Atmospheric Sciences.

Researchers will analyze and use the new SIF product to better understand the terrestrial ecosystem. This includes assimilating SIF data into GPP modeling and global carbon flux estimations. Optimization of the IAPCAS/SIF algorithm will help to develop SIF products from other satellite missions, and scientists hope that exploring the comprehensive usage of SIF products will promote the quantitive research of the global carbon sink and climate change.