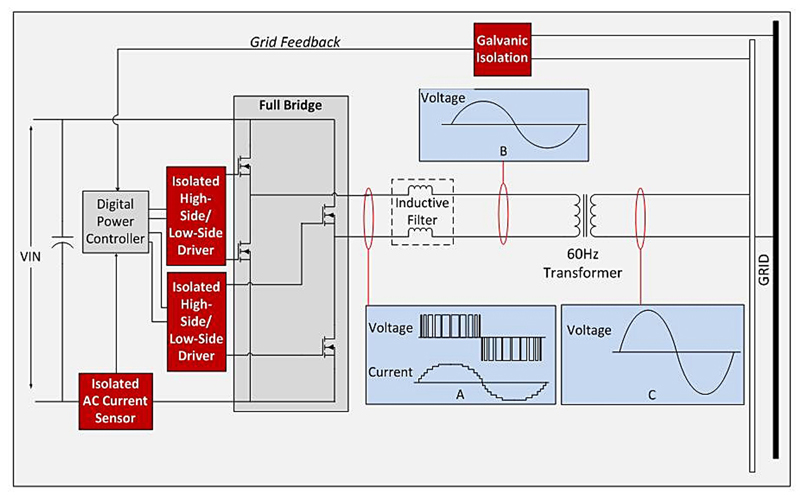 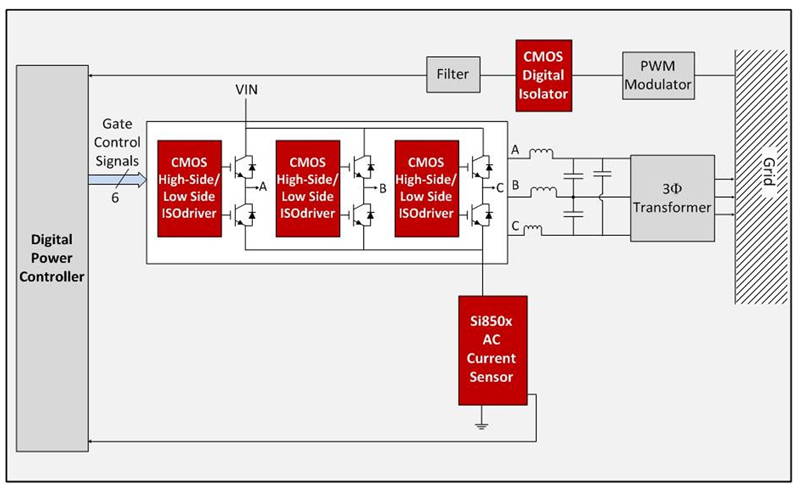 21st Century Component Solutions for PV Inverters PV inverter architecture does not end with the single-phase, transformer-based inverter shown in Figure 1. Other common types include high-frequency, bipolar, 3-phase, transformerless and battery-powered inverters. While these topologies differ from one another, they often share the need for the same component solutions. The block diagram in Figure 2 shows several CMOS isolation devices used in a transformer-based, three-phase inverter. This is a classic closed loop architecture where the digital controller modulates the power switch duty cycle to force the PV system output voltage amplitude and phase to exactly match that of the grid. These isolated gate drivers integrate safety certified galvanic isolation (rated at 1kV, 2.5kV or 5kV) and high-side level shifting functions in a single package, eliminating the need for external isolation devices. Each driver output is isolated from the other, enabling a mix of negative and positive voltage rail voltages to be used without latch-up. Current feedback to the controller is provided by a single 4 mm x 4 mm x 1 mm CMOS isolated ac current sensor (its 1kV isolation rating is limited by package size - larger packaged versions are rated up to 5kVrms). These monolithic sensors have a wider temperature range, higher accuracy and higher reliability compared to current sense transformers. The sensor is reset on a cycle-by-cycle basis using the inverter gate control signals generated by digital controller, eliminating the need for external reset circuitry. The grid feedback is a critical part of the system feedback control mechanism. A resistive attenuator is used to reduce the grid voltage to a range that is compatible with the PWM modulator, which converts the sine wave input to a discrete PWM waveform and safety isolated by the CMOS digital isolator. Going Forward As PV inverters expand in functionality, designers will demand more integrated, application-specific component-level devices that will further leverage and drive innovation in CMOS isolation. As these events unfold, PV power systems will become more widespread and ultimately a viable member of the utility mainstream that will significantly reduce our dependence on fossil fuels. www.silabs.com