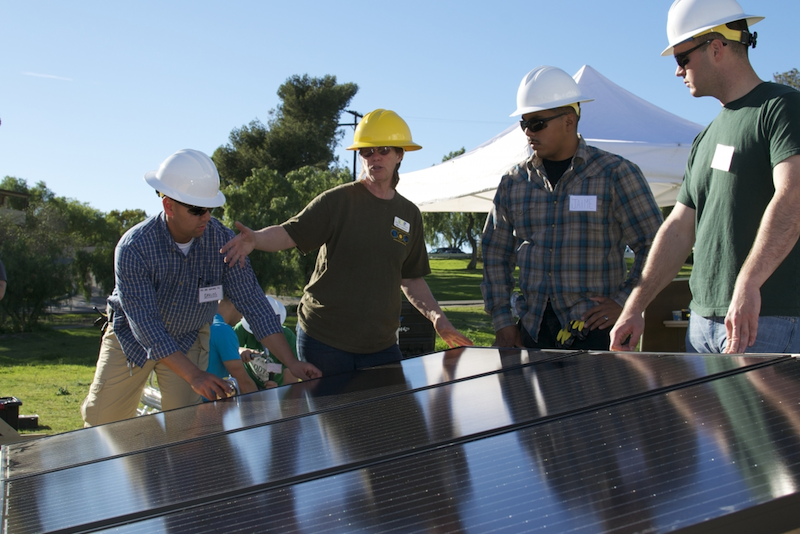 Military personnel participating in Solar Ready Vets learn how to how to size and install solar energy systems, connect electricity to the grid, and interpret and comply with local building codes

On April 3, President Obama announced the expansion of SunShot’s Solar Ready Vets program to a total of 10 military bases. The announcement was made at Hill Air Force Base in Utah, which will be the fourth installation to host the training. Programs are already in place at Camp Pendleton in California, Fort Carson in Colorado, and Naval Station Norfolk in Virginia. Solar Ready Vets connects our nation’s skilled veterans to the solar energy industry, preparing them for careers as solar installers, sales representatives, system inspectors, and other solar-related occupations.

In September 2014, the Energy Department’s SunShot Initiative launched the Solar Ready Vets program to connect our nation’s skilled veterans to the solar energy industry, preparing them for careers as solar photovoltaic (PV) system installers, sales representatives, system inspectors, and other solar-related occupations. Solar Ready Vets is enabled by the U.S. Department of Defense’s SkillBridge initiative, which allows exiting military personnel to pursue civilian job training, employment skills training, apprenticeships, and internships up to six months prior to their separation.

Employment in the U.S. solar industry increased nearly 86% over the past four years, and veterans are strong candidates to fill these positions because they are disciplined, motivated, and technically savvy. Solar Ready Vets trains active military personnel who are in “transitioning military” status – within a few months of leaving military service and becoming a veteran – and it prepares them to be strong candidates for positions in management, PV installation, sales, as well as technical positions.