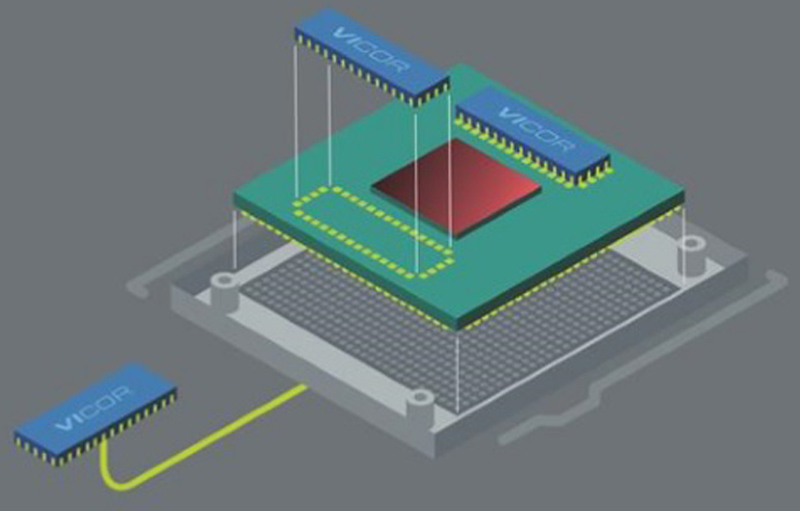 Three different, but connected, applications are driving the need for higher performance computing architectures. Artificial intelligence, machine learning and big data mining require a huge amount of processing power and this has driven the adoption of highly paralleled processing elements. These architectures can be CPU, DSP or FPGA-based, or often, a combination of two or more. For simplicity, Vicor terms these new complex types of processor architectures as XPU.

Number crunching at this scale places heavy demands on the power supply. At the moment, a lot of energy is wasted, and this is almost tolerable as most high performance computing installations are currently in datacentres. But, with data centres using almost 3% of the electricity generated in the world this year, there is a strong drive for greater efficiency. In the future, more high performance computing will be done locally. For example automotive self-driving applications will mean that each vehicle will contain its own XPU driven supercomputer, which has to be powered from the same source as the drivetrain, making power efficiency a key requirement.

One of the main challenges for designers is getting the power efficiently over the last inch of the circuit board, from the voltage regulator to the XPU. Inefficient power delivery can stifle the performance of the XPU. If the current is limited, the XPU will slow down its operating frequency to handle the new power level. The power delivery system also creates problems itself. Multiple circuit traces need to be designed without introducing parasitic capacitance and inductance, which takes time. The design also requires many XPU pins - up to 900 in some occasions. These problems are only set to magnify as XPU current demands increase.

For over a decade, Vicor has pioneered a Factorized Power Architecture power-on-package solution that can deliver power directly to the IC packaging. Over time, this niche solution has been refined, and now the company has adapted it to power XPU-based systems. The solution comes in the form of Vicor’s MCM-MCD chip-set, a two stage system with the Modular Current Driver (MCD) being situated on the motherboard, which is used to drive and control one or more Modular Current Multipliers (“MCMs”) that are integrated inside the XPU package. The solution demonstrated by Vicor at launch showed one MCD controlling two MCDs, which delivered 320A of continuous current to the XPU, and had the overhead for a 640A peak current capability.

The Vicor MCM-MCD chip-set delivers the power to the XPU at 48 Volts, meaning that it delivers power at much less current than existing solutions, which down convert the voltage on the PCB before delivering it to the XPU. The number of XPU pins required to deliver the power is also decreased to around 20 pins because of the lower current requirements, meaning circuit design is vastly simplified. The lower current delivery also equates to lower losses. The MCM ICs then multiply the current internally and deliver the power directly to the XPU where it is required.