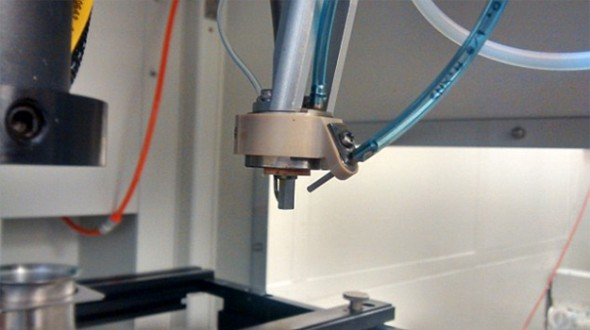 As is true of many technologies right now, the development of viable solar power is at an upward inflection point. Materials science in everything from mining to graphene production is furnishing researchers with better and better physical substrates for collection, while increasingly sophisticated electronics and design capture more and more of that energy as useful electricity. Yet there’s still one big problem: how do we actually make solar cells on a budget? This isn’t like a nuclear reactor, some big government infrastructure project; if solar is going to work on the large scale people are going to have to invest their personal money in generating at least some of their power. A new study from Sheffield University in the UK may have an answer: a spray-on solar cell that rivals some of the most efficient technology out there.

Normally, designing solar technology is a zero sum game; if you want better efficiency, you have to make specialized micro- and nano-scale details, which makes the panel far more expensive. In the context of solar power, “efficiency” refers to the fraction of the sunlight hitting a cell which is actually converted to useful energy. This spray-on technology achieves a cool 11% efficiency, which is impressive given that this is a budget technology. Research cells can get up to 40% efficiency or even more but those could never actually take off in the consumer market. Any feasible solar power technology has to be able to be mass produced for a reasonable price-per-kilowatt produced.

They achieve this by using a material called perovskite, which has been of interest for several years for its useful properties and extreme low price. Right now silicon-based solar cells can achieve about 25% efficiency for a moderate price, and the best conventional perovskite cells can reach 19% — the researchers seem confident that they can tweak their process to start pushing their 11% up toward those two benchmarks. If they can do it, they’ll have an extremely low-cost way of making high-producing solar panels.

But of course, being a spray-on technology basically similar to a car-painting rig, this won’t just spray onto traditional panels. Much like paint, this spray technology will coat any shape it’s presented with, so people should be able to get cheap panels that easily maximize the space they have available. More to the point, this technology could put a working solar cell on very small devices or along oddly shaped parts of intricate devices.