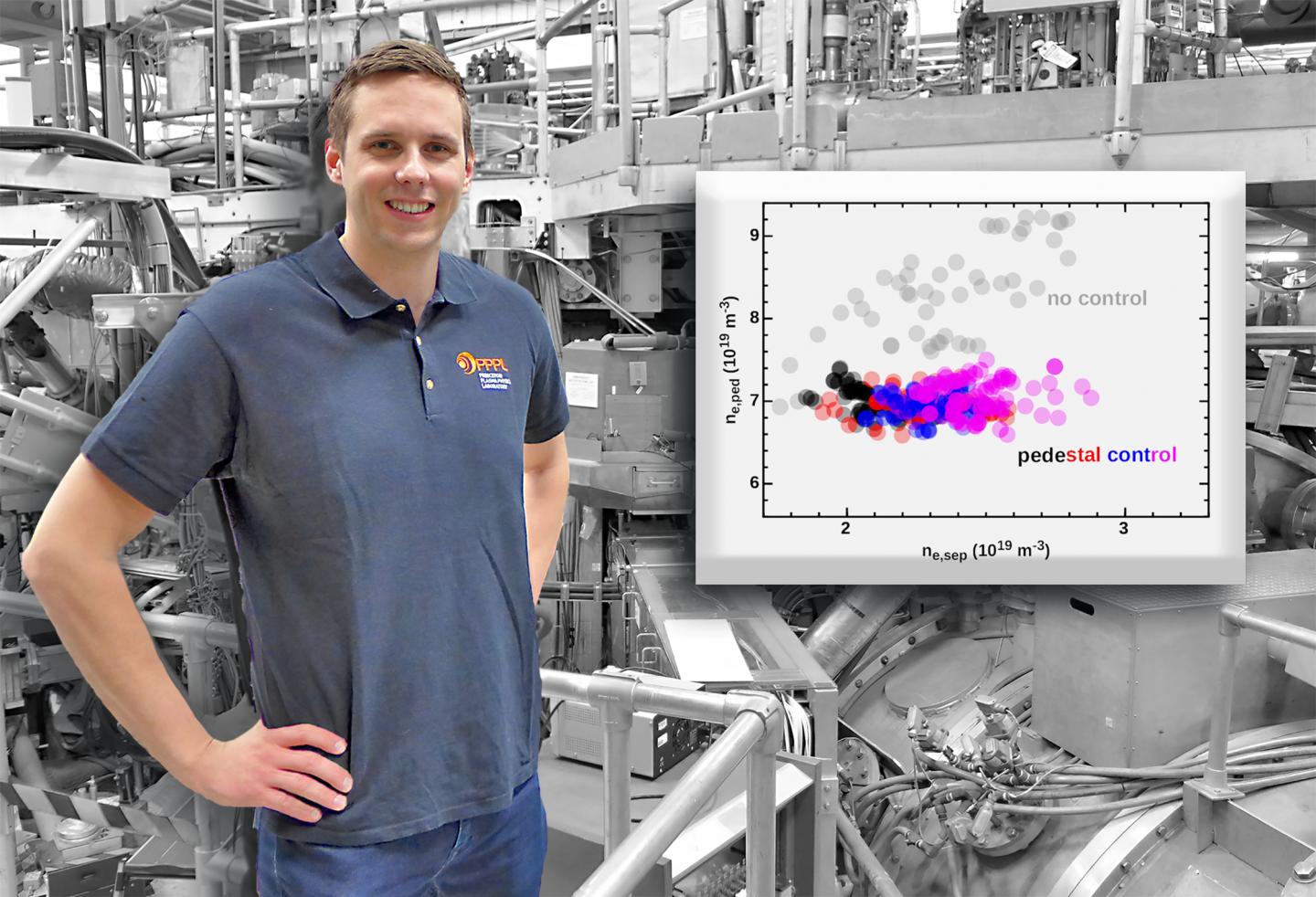 Physicist Florian Laggner before the DIII-D tokamak with a figure from his paper.

All efforts to replicate in tokamak fusion facilities the fusion energy that powers the sun and stars must cope with a constant problem -- transient heat bursts that can halt fusion reactions and damage the doughnut-shaped tokamaks. These bursts, called edge localized modes (ELMs), occur at the edge of hot, charged plasma gas when it kicks into high gear to fuel fusion reactions.

To prevent such bursts researchers at the DIII-D National Fusion Facility, which General Atomics (GA) operates for the U.S. Department of Energy (DOE), previously pioneered an approach that injects small ripples of magnetic fields into the plasma to cause heat to leak out controllably. Now scientists at the DOE's Princeton Plasma Physics Laboratory (PPPL) have developed a control scheme to optimize the levels of these fields for maximum performance without ELMs.

The research, led by PPPL physicist Florian Laggner and funded by the DOE Office of Science, developed the scheme at DIII-D in San Diego. Laggner said the method, put together with researchers from GA and other collaborating institutions, reveals a path to suppressing ELMs and maximizing fusion power on ITER, the international tokamak under construction in France that is designed to demonstrate the practicality of fusion energy. "We show a path forward, a way that it can be done," said Laggner, lead author of a paper reporting the findings in Nuclear Fusion.

Fusion powers the sun and stars by combining light elements in the form of plasma -- the hot, charged state of matter composed of free electrons and atomic nuclei that makes up 99 percent of the visible universe -- to generate massive amounts of energy. Scientists around the world are seeking to harness fusion for a virtually inexhaustible supply of safe and clean power to generate electricity.

The demonstrated technique uses the expanded capacity of the DIII-D plasma control system to address the inherent conflict between optimizing fusion energy and controlling ELMs. The scheme focuses on the "pedestal," the thin, dense layer of plasma near the edge of the tokamak that increases the pressure of the plasma and thus fusion power. However, if the pedestal grows too high it can create ELM heat bursts by suddenly collapsing.

So the key is controlling the height of the pedestal to maximize fusion power while preventing the layer from becoming so high that it triggers ELMs. The combination calls for real-time control of the process. "You can't just preprogram some constant scheme beforehand, since the plasma and wall conditions may evolve," said Egemen Kolemen, an assistant professor of Mechanical and Aerospace Engineering at Princeton University and a PPPL physicist who oversaw the project. "The control must provide adjustments in real time."

The developed system created ELM suppression at the minimum amplitude, or size, of the magnetic disturbance. It further reduced the amplitude to allow partial recovery of the confinement lost during the process, thereby achieving both stable ELM suppression and high fusion performance.

"Laggner and colleagues have assembled an impressive suite of control tools to regulate core and edge plasma stability in real-time," said GA physicist Carlos Paz-Soldan, a coauthor of the paper. "Some kind of adaptive control like the techniques pioneered in this work will likely be necessary to regulate the plasma edge stability in ITER."

While the international facility will not simply apply the control system developed by PPPL and GA, it must create its own method for coping with ELMs. Indeed, "active control schemes will enable safe operation at maximized [fusion] gain in future devices such as ITER," the authors said. Moreover, they added, implementation of such a scheme on DIII-D provides proof of principle and "guides future development."

PPPL, on Princeton University's Forrestal Campus in Plainsboro, N.J., is devoted to creating new knowledge about the physics of plasmas -- ultra-hot, charged gases -- and to developing practical solutions for the creation of fusion energy. The Laboratory is managed by the University for the U.S. Department of Energy's Office of Science, which is the single largest supporter of basic research in the physical sciences in the United States and is working to address some of the most pressing challenges of our time. For more information, visit energy.gov/science (link is external).