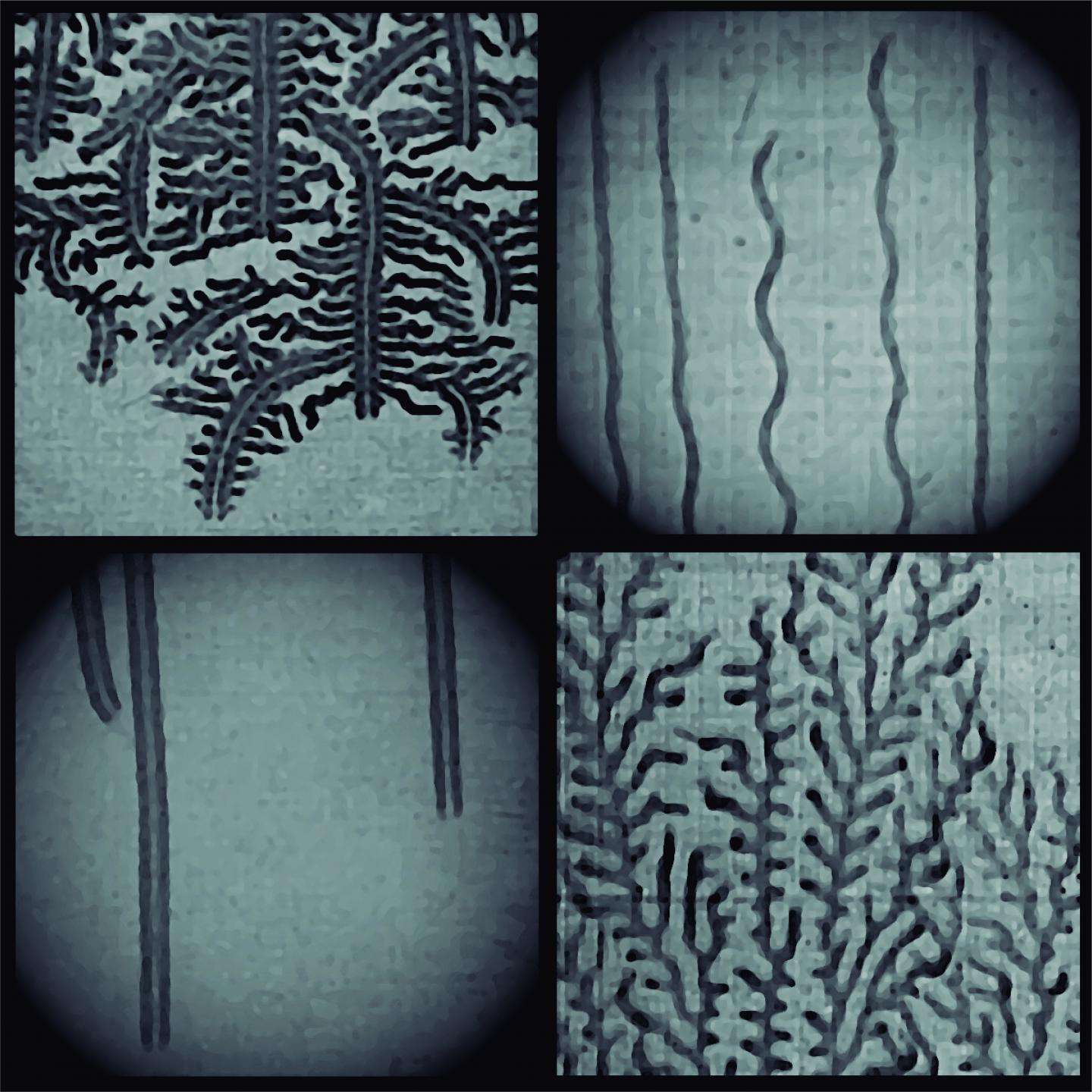 Propagation of an "ultra-lean" hydrogen flame in a very narrow combustion chamber. The images on the left show a flame propagating vertically downward; those on the right are burning in the opposite direction. The dark markings show the path followed by the flame, while the lighter parts show the hydrogen that has not been burned.

Hydrogen flames can propagate even with very little fuel, within surprisingly narrow gaps and can extend breaking up into fractal patterns. That is the unexpected physical behavior of this gas when it burns, which has been detected by a scientific team led by researchers from Universidad Carlos III de Madrid (UC3M). These results can help to improve the safety of Hydrogen-powered devices.

The study, published in the latest edition of the journal Physical Review Letters, details the results from experiments which have demonstrated that hydrogen flames can survive in more extreme conditions than previously thought. In this research, led by Fernando Veiga, Eduardo Fernández-Tarrazo and Mario Sánchez Sanz, from the UC3M Department of Thermal and Fluids Engineering, Daniel Martínez Ruiz from the Universidad Politécnica de Madrid (UPM), Mike Kuznetsov from the Karlsruhe Institute of Technology (Germany) and Joachim Grune from Pro-Science GmbH (Germany) have likewise participated.

"Our article shows that hydrogen flames are capable of propagating in very narrow spaces of a millimeter or so, creating an undesirable and dangerous situation," explained Fernando Veiga, one of the researchers who has carried out a large share of the experimental work.

Using hydrogen as a fuel can help to reduce carbon dioxide emissions, but its storage and transport can hold certain risks. In this study, researchers have empirically shown that the gas can burn in unexpected situations. For that purpose, the team tested dilutions of gaseous fuel in a space just a few millimeters wide and found that the hydrogen could burn steadily even when its concentration was only 5% in volume.

Hydrogen flames are almost invisible to the naked eye and emit very little radiant heat, which makes them difficult to detect. To do so, the researchers used a special method to trace their movement and a high speed camera to track the path of the flames during their propagation. They confirmed that they form a fractal path as they propagate, that is, they adopt a geometric form whose basic structure is repeated on different scales. "The video recording reveals this fractal path, which precisely permits the flame efficient access to new fuel as it burns," Mario Sánchez Sanz pointed out.

Hydrogen constitutes a clean and efficient energy, and as such, energy generation technologies based on its use will significantly increase in the near future. Accordingly, "their design and safety protocol will have to take these new ways for propagation into consideration," observed Daniel Martínez Ruiz, professor at the ETSI Aeronáutica y del Espacio (The School of Aeronautics and Space Engineering) of the UPM.

These results can be useful for engineering teams that design hydrogen storage systems, who will need to take into account its extreme flammability, even in very narrow spaces. Hydrogen fuel cells are used as a source of energy in cars and motorcycles, for example. "A hydrogen leak and its accumulation in a confined space could lead to these types of flames," added Mario Sánchez Sanz.

According to the researchers, more studies of this type are needed to assess safety in relation to leaks in hydrogen-powered vehicles and other related devices. Above all, within today's context of needing to reduce greenhouse gas emissions and combat climate change, it seems imperative to accelerate development and use of hydrogen-based energy technologies.