What Role Will Supercapacitors Play in the Design of Future Energy Systems? 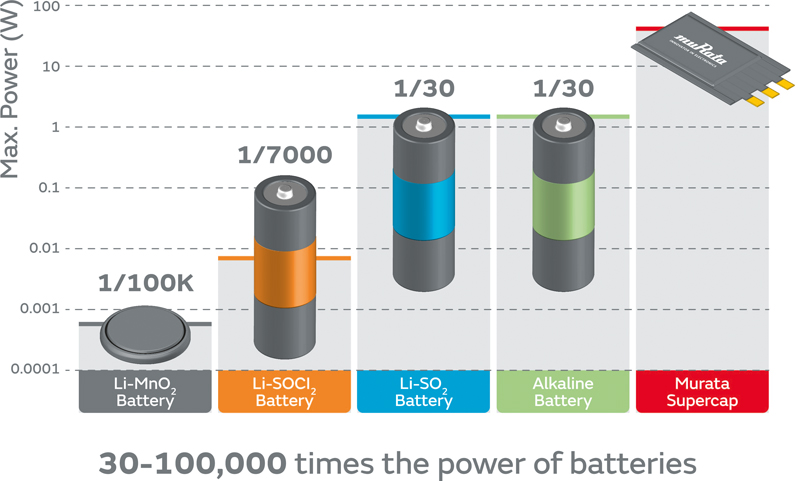 Increased functionality, however, means more complexity and the higher power-draw that entails. Engineers have gone to great lengths to minimize watts dissipated with dynamic modes of operation such as putting a device to ‘sleep’ when processing demand is low, but there are some functions that need bursts of power, such as wireless communications or a flash from an LED. It’s not just micro-power circuits that need this function; devices that include small motors, smart meters and audio amplifiers for example all need this feature of peak power capability without a size or cost overhead.

To size the device battery for these peak loads is inefficient, bulky and expensive, so some form of peak load-levelling is desirable. This is where supercapacitors come in.

A traditional lithium or alkaline battery has been a solution, but the technologies have their limitations. Compared with batteries, a ‘supercap’ has much higher power density, up to 100,000 times more than a Li-MnO2 coin cell for example. The supercap wins hands-down for relatively high power for long periods, and is an order of magnitude better than the closest battery performance – see Figure 1.

The particular performance of a supercap comes from its construction. It has no dielectric like other capacitor types, but an Electrical Double Layer (EDL). This is formed from an interface of active carbon powder and an electrolyte. The storage of charge is not by a chemical process but by the physical movement of ions to the pores in the carbon layers. The pores provide a huge surface area for charge to accumulate, giving capacitance values in excess of 1 Farad at 5 V rating. Equivalent Series Resistance (ESR) values are moderate, typically 50 to 500 milliohms, effectively making the capacitors short-circuit-proof. Compared with a battery, the supercaps only store about 10 Joules of energy, which generates no stress or significant heating effect on the part even under short-circuit conditions.

Another feature of supercaps is the virtually unlimited number of charge and discharge cycles allowed compared with finite numbers for batteries. Lifetime is long, with temperature and applied voltage being accelerating factors. Under controlled conditions, however, the parts can easily give far more than five years of useful service. Any concern about moisture ingress is addressed by the laminate construction, with its minimal size of resin seal. Like electrolytics, the temperature range for supercaps is -40°C to +70°C or +85 °C with similar ESR variation at low temperatures.

Supercaps are polarized and available up to about 5 V rating. In fact, the typical DMT and DMF series from Murata are already two ‘units’ in series. Higher voltages can be easily achieved with series connection of the parts, with passive or active voltage balancing schemes. Paralleling is also easy with no special precautions necessary to achieve more energy storage. Charging is as quick as an electrolytic capacitor from a simple voltage source.

Another significant benefit is the ultra-slim form factor of the Murata DMT and DMF series, which are only 2.2 mm, matching the demands of today’s ‘pocketable’ and wearable electronics.