Physicists from the University of Konstanz explore superconductivity for information processing 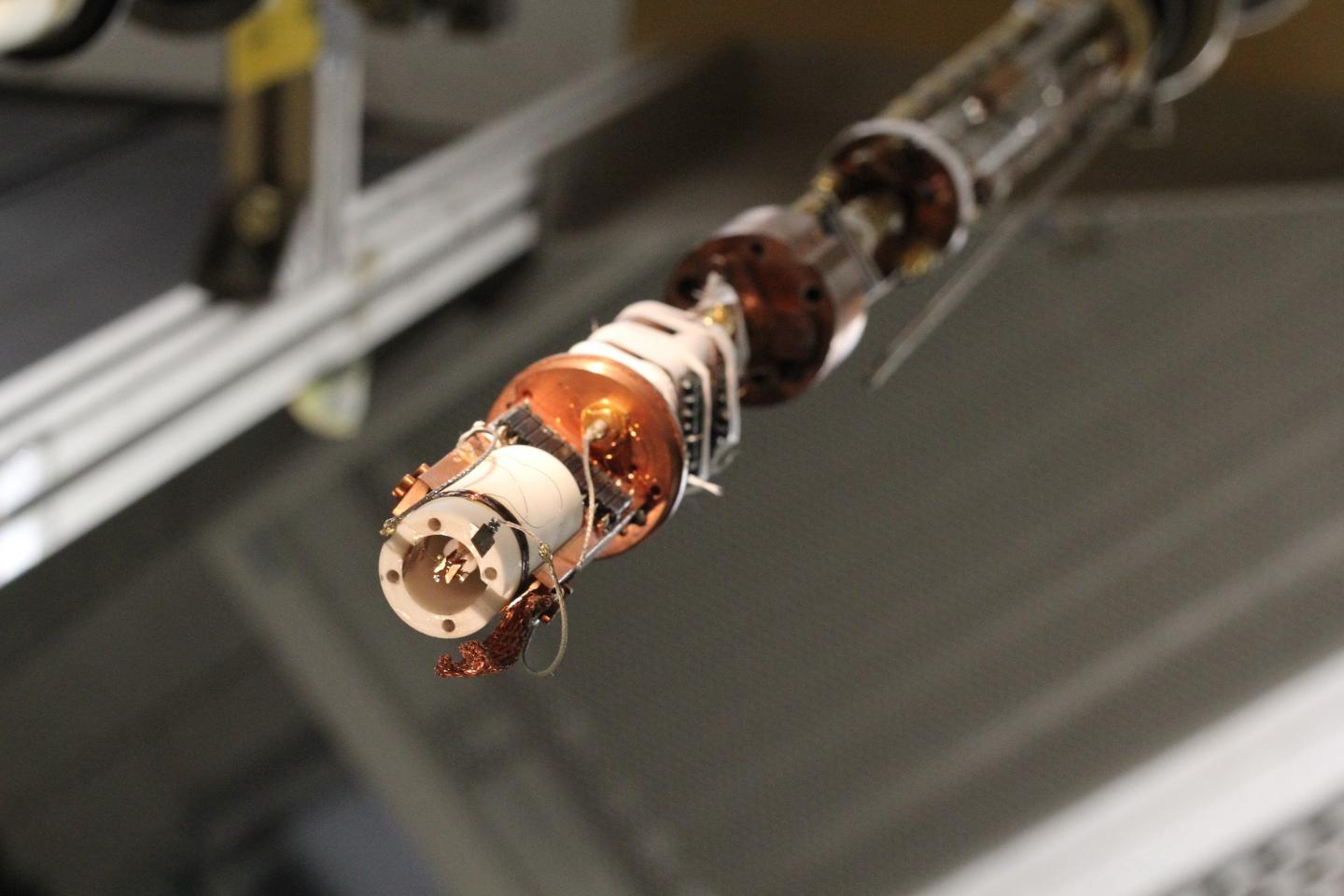 This is a scanning tunnelling microscope installed in a helium cooling device seen from below (with the sample stage removed). The mechanism for positioning the microscope tip above the sample surface is visible (center of image).

Generally speaking, magnetism and the lossless flow of electrical current ("superconductivity") are competing phenomena that cannot coexist in the same sample. However, for building supercomputers, synergetically combining both states comes with major advantages as compared to today's semiconductor technology, which has come under pressure due to its high power consumption and resulting heat production. Researchers from the Department of Physics at the University of Konstanz have now demonstrated that the lossless electrical transfer of magnetically encoded information is possible. This finding enables enhanced storage density on integrated circuit chips and, at the same time, significantly reduces the energy consumption of computing centres. The results of this study have been published in the current issue of the scientific journal Nature Communications.

The miniaturisation of the semiconductor technology is approaching its physical limits. For more than 70 years, information processing in computers has been realized by creating and transferring electrical signals, which requires energy that is then released as heat. This dissipation results in a temperature increase in the building blocks, which, in turn, requires complex cooling systems. Heat management is one of the big challenges in miniaturization. Therefore, efforts are currently made worldwide to reduce waste heat in data processing and telecommunication.

A collaboration at the University of Konstanz between the experimental physics group led by Professor Elke Scheer and the theoretical physics group led by Professor Wolfgang Belzig uses an approach based on dissipation-free charge transport in superconducting building blocks. Magnetic materials are often used for information storage. Magnetically encoded information can, in principle, also be transported without heat production by using the magnetic properties of electrons, the electron spin. Combining the lossless charge transport of superconductivity with the electronic transport of magnetic information - i.e. "spintronics" - paves the way for fundamentally novel functionalities for future energy-efficient information technologies.

The University of Konstanz researchers address a major challenge associated with this approach: the fact that in conventional superconductors the current is carried by pairs of electrons with opposite magnetic moments. These pairs are therefore nonmagnetic and cannot carry magnetic information. The magnetic state, by contrast, is formed by magnetic moments that are aligned in parallel to each other, thereby suppressing superconducting current.

"The combination of superconductivity, which operates without heat generation, with spintronics, transferring magnetic information, does not contradict any fundamental physical concepts, but just naïve assumptions about the nature of materials", Elke Scheer says. Recent findings suggest that by bringing superconductors into contact with special magnetic materials, electrons with parallel spins can be bound to pairs carrying the supercurrent over longer distances through magnets. This concept may enable novel electronic devices with revolutionary properties.

Under the supervision of Elke Scheer, Dr Simon Diesch performed an experiment that clarifies the creation mechanism of such electron pairs with parallel spin orientation. "We showed that it is possible to create and detect these spin-aligned electron pairs", Simon Diesch explains. The design of the system and the interpretation of the measurement results rely on the doctoral thesis of Dr Peter Machon in the field of theoretical physics, which was conducted under the supervision of Wolfgang Belzig.

"It is important to find materials that enable such aligned electron pairs. Ours is therefore not only a physics but also a materials science project", Elke Scheer remarks. Researchers from the Karlsruhe Institute of Technology (KIT) provided the tailor-made samples consisting of aluminium and europiumsulfide. Aluminium is a very well investigated superconductor, enabling a quantitative comparison between theory and experiment. Europiumsulfide is a ferromagnetic insulator, an important material property for the realisation of the theoretical concept, which maintains its magnetic properties even in very thin layers of only a few nanometres in thickness as used here. Using a scanning tunnelling microscope developed at the University of Konstanz, spatially and energetically resolved measurements of the charge transport of the aluminium-europiumsulfide samples were performed at low temperatures. Contrary to commercial instruments, the scanning tunnelling microscope based at the Scheer lab has been optimized for ultimate energy resolution and for operation in varying magnetic fields.

The voltage dependence of the charge transport through the samples is indicative of the energy distribution of the electron pairs and allows accurate determination of the composition of the superconducting state. To this end, a theory previously developed by the Belzig group and tailored to describe the aluminium-europiumsulfide interface was applied. This theory will enable the researchers to describe much more complex electrical circuits and samples in the future. The energy spectra predicted by the theory agree with the experimental findings, providing direct proof of the magnetic electron pairs.

Furthermore, the experimental-theoretical collaboration resolved existing contradictions regarding the interpretation of such spectra. With these results, the University of Konstanz physicists hope to reveal the high potential of superconducting spintronics for enhancing or replacing semiconductor technology.