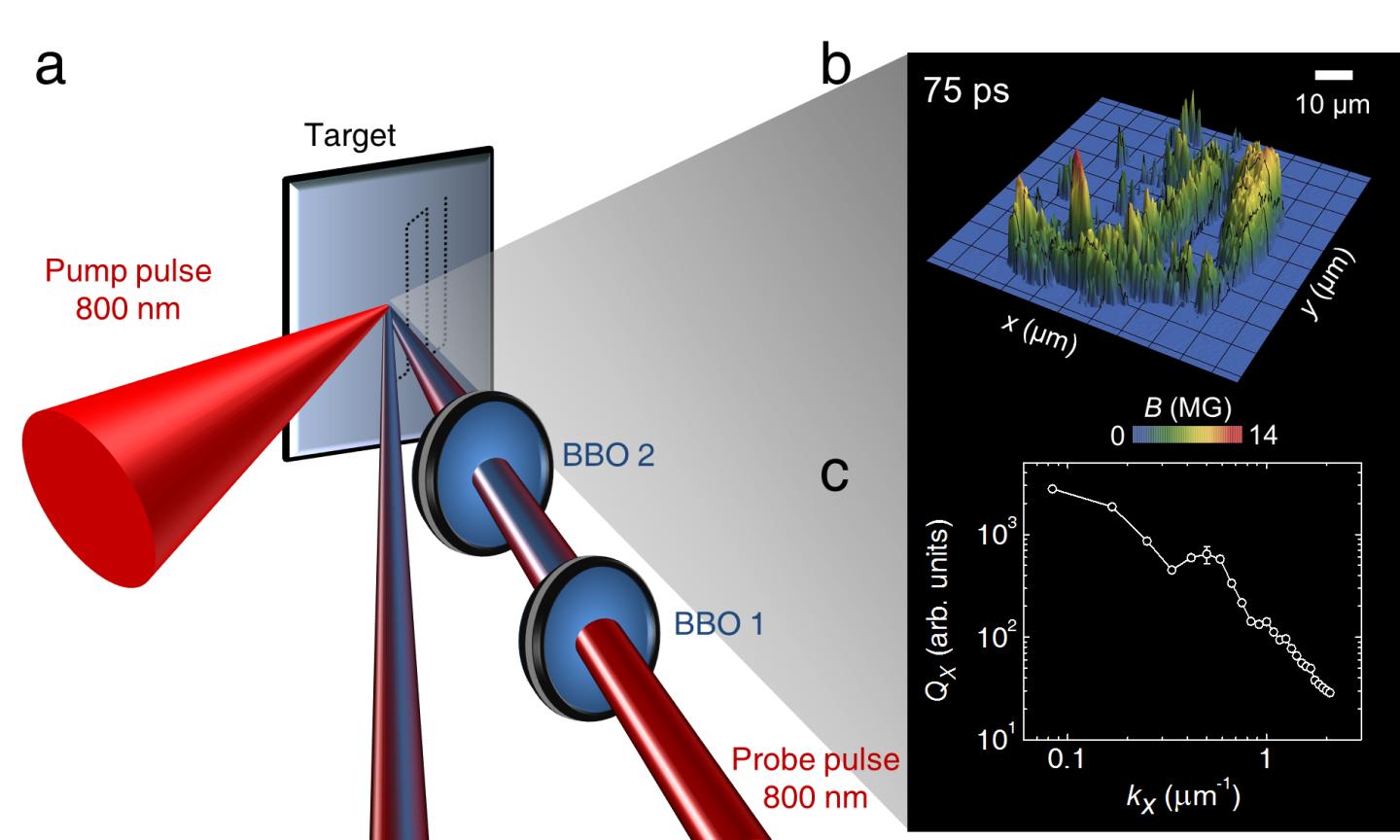 (a) A pump pulse creates the plasma on a solid while a probe pulse monitors the time evolution. The top panel in b shows the spatially randomized magnetic field in the plasma while the figure at the bottom shows the power spectrum of the magnetic field (magnetic energy density variation of with inverse of spatial length. The curve indicates magnetic turbulence in the plasma and mimics that from the solar wind.

Turbulent magnetic field dynamics that explain astrophysical phenomena like the evolution of stars could thus far be obtained only through observations via telescopes and satellites. Now a team of scientists from India and Portugal have recreated such magnetic turbulence on a table top in the lab, using a high intensity ultrashort laser pulse to excite a hot, dense plasma on a solid surface and followed the extremely fast evolution of the giant magnetic field generated by the plasma dynamics. This ground-breaking study will be published in Nature Communications on 30 June.

Turbulence is everywhere- from tea cups to tokomaks and from water jets to weather systems, it is something we all see and experience. Yet, even after centuries of serious scientific study, fluid turbulence is still not properly understood and remains "Interesting. Vexing. Longstanding. Unsolved."[1]. While it is difficult to define turbulence simply, it has many recognizable features, the most common being the fluctuations in parameters like velocity and pressure, indicating randomization of the flow [2]. By the way, turbulence is not all bad and destructive as you might feel when tossed around on a flight during bad weather. One good feature is that it enables much faster mixing than possible only with normal, slow diffusion. For instance, the sugar you added in your cup of tea this morning would have taken hours and days to disperse but for your stirring which caused your tea to become turbulent. As you have surely noticed, you stirred the tea in a large circle, but the swirling spread to smaller and smaller lengths and eventually, the mixing occurred at the molecular level. The end result? Even the smallest drop of tea is as sweet as a large gulp! Turbulence also helps in mixing fuel and oxygen for efficient combustion in engines.

Much of our universe is of course not an ordinary fluid but consists of highly ionized gas known as plasma and this plasma can often be extremely hot and swirling at unimaginable speeds. Turbulence in a plasma is much more complex than that in neutral hydrodynamic fluids. In a charged plasma environment, the negatively charged, light electrons and positive heavy ions respond at vastly different length and time scales. The motion of these charged species is governed by electromagnetic forces and the current flow through the charge particle dynamics leads to magnetic field generation. Therefore the randomness of magnetic fields often mimics the fluid turbulence in plasmas.

The team of scientists leading this new study, at the Tata Institute of Fundamental Research, Mumbai, Institute of Plasma Research, Gandhinagar (both in India) and at the Instituto Superior Tecnico, Universidade de Lisboa, Portugal find that the turbulence in the magnetic field is initially driven by the electrons (at a trillionth of a second) and the ions step in and take over at longer times. This is the first time such a 'relay race' involving two different species has been glimpsed. Further, these lab observations have an uncanny resemblance to the satellite data on the magnetic field spectra measured for turbulent astrophysical plasmas in the solar wind, solar photosphere and earth's magnetosheath. Although in the laser experiment the electrons in the plasma get energised initially, the ion dominant response that kicks in at later times shows spectral features similar to those in the astro systems. These experiments thus establish clear connections between the two scenarios, even though the driver of turbulence in the lab plasma is very different from that in the astrophysical system.

Now that we have got wind of solar turbulence on a table top, can we use lab experiments to turn the tables on the intractable problem of turbulence? Well, that may still be a long way off but it is a tantalising prospect that reliable measurements in the lab might make us better and better at peeking into turbulent stellar scenarios.

And that should set off stars in our eyes!