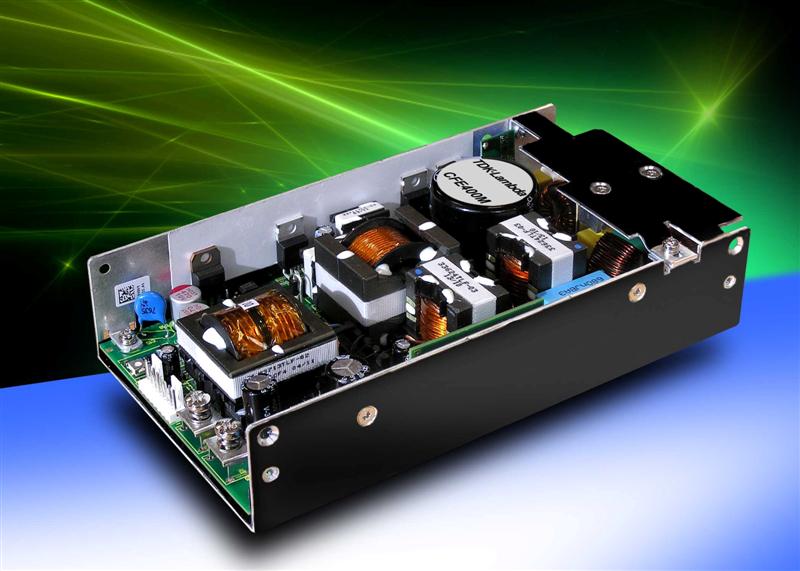 TDK-Lambda UK, a group company of the TDK Corporation, introduces its next generation of digitally controlled, AC-DC medical power supplies - the single output CFE400M, which is available in convection and fan cooled versions. Combining a 4kVac reinforced input-to-output isolation with dual fusing and an output-to-ground isolation of 1500Vac, the CFE400M meets IEN/EN/UL/CSA 60601-1 Ed 2 & 3 safety approvals for medical equipment, suitable for BF (body floating) type medical applications. About the new CFE400M series, Martin Southam, Director of Marketing for TDK-Lambda EMEA says: "There's strong customer demand for compact convection cooled power supplies that deliver their rated power without compromising long-term reliability. By utilising our proven digital power conversion know how, 50% less power is dissipated thus ensuring reliable thermal design. The CFE400M is perfect for customers working to ErP or Climate Savers Eco-Design guidelines." When convection cooled, the CFE400M is rated at 300W for operating temperatures up to 40°C (250W at 50°C); when fan cooled - either integral quiet fan or customer air (1.5 m/s) - the power supply is rated at 400W up to 50°C. The CFE400M also has a 450W peak power for up to 10 seconds, for both cooling options. Available in field adjustable 12V, 24V and 48Vdc versions with a 12Vdc / 0.25A fan supply, the CFE400M has a 5V/100mA standby power output or a 5V/2A option. The 100mA option meets the ErP Directive with less than 0.5W standby power consumption and all models meet or exceed Climate Savers Silver level. Other features include high efficiency (94%), remote ON/OFF and remote sense. These features combined with a small 178 x 100 x 40mm size make the CFE400M well-suited for many types of medical and dental equipment and other high integrity applications including ATE, automation, broadcast, instrumentation, routers, servers and security networks. The interleaved boundary mode boost converter, where the two converters operate at 180 degrees to each other, halves the current through each PFC choke and reduces the ripple current in the boost capacitor - this in turn reduces the temperature of the boost capacitor and increases its life. Below half load one converter is disabled, reducing losses and increasing efficiency. At really low loads (around 50W), the PFC burst mode function operates, which increases the low load efficiency of the CFE400M still further. The zero-voltage switching (ZVS) resonant converter on the output reduces the noise, improves the EMC and reduces the amount of filtering required on the output. Since there are lower switching losses due to the use of ZVS overall efficiency is further increased. The microprocessor on the CFE400M controls the output of the resonant converter and looks after the remote ON/OFF function. It also controls the current limit and peak current operation, which enables the CFE400M to power inductive and capacitive loads without malfunction. As with the previous generation of digitally controlled power supplies, the EFE series, the micro also looks after housekeeping routines, such as controlling the timing to turn power on and off and looking after the PFC, thereby reducing the overall control circuit component count by 25%. All models in TDK-Lambda's CFE400M range are approved to IEC/EN/UL/CSA 60950-1 Edition 2 for general purpose applications, IEC/EN/UL/CSA 61010-1 Edition 2 for laboratory and process control applications and IEC/EN/UL/CSA 60601-1 Editions 2 & 3 for medical equipment. In addition, the units are CE marked to the LV Directive and come with a 5-year warranty. For more information about the CFE400M series of AC-DC power supplies, including a comprehensive datasheet, please call TDK-Lambda directly on +44 (0)1271 856600 or visit the website at: www.uk.tdk-lambda.com/cfe