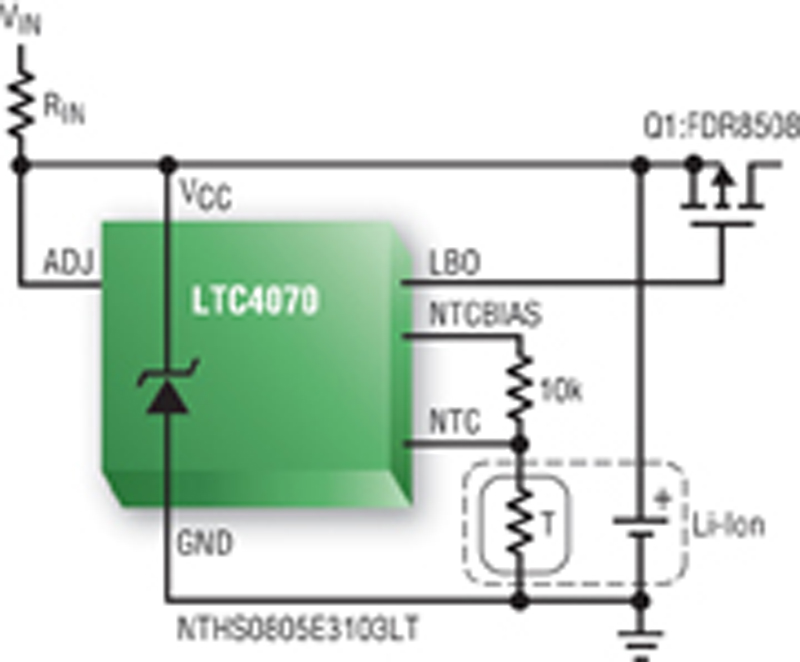 Shunt voltage references are simple to use; they have been around for many years and are in a myriad of products. However, they cannot effectively charge a battery, and to configure one to do such a task can be extremely cumbersome. To-date, the ability to accurately and safely charge a Lithium-Ion/Polymer, coin cell or a thin film battery from a low-current source or an intermittent harvested energy type source has been unachievable. Embryonic in the market place, energy harvesting ICs can convert a transducer's signal into an input appropriate for a battery charger device. Recent technology developments have pushed energy harvesting to the point of commercial viability, even though it has been emerging since early 2000. In 2010, a "growth" phase is imminent for this technology. The opportunities in energy harvesting applications are widespread:

Many of these applications inherently have intermittent or low-power sources. On the battery side, although technology has improved, portable electronic device batteries still require protection and conditioning to keep them running optimally. Lithium-Ion/Polymer batteries are a mature technology and a popular choice to power many electronic devices due to their high energy density, low self-discharge, low maintenance, and wide voltage range, among other features. Coin cells offer high energy density, stable discharge characteristics and low weight in a small form factor. Thin film batteries are an emerging technology with such benefits as a high number of charge cycles and physical flexibility, i.e. they may be formed to fit in almost any shape depending on the end application. However, some potential detrimental effects on these batteries exist if not properly charged and conditioned. Design challenges for low power consumption chargers An adjustable shunt reference can be programmed for an appropriate battery float voltage, but it will lack the NTC function of a battery charger. More importantly, the required operating current is so high that battery charging from low power or intermittent sources is not practical. Alternatively, a discrete shunt reference can be built from a Zener diode, resistors, an NPN transistor, and comparators for the NTC function. However, it will still suffer from the same limitations outlined above. Additionally, it will be cumbersome to implement and will consume much valuable PCB area by comparison. Typical battery charger ICs require a constant DC input voltage and cannot handle bursts of energy. However, intermittent energy harvesting sources such as indoor photovoltaic arrays or piezoelectric transducers provide bursts of power. A unique IC with sub-1uA quiescent / operating current is necessary to charge a battery from this type of energy source. Lithium-Ion/Polymer chemistry batteries provide the high performance features necessary for portable electronic devices but must be treated with care. For example, Lithium-Ion/Polymer cells can become unstable if charged over 100mV beyond their recommended float voltage. Further, simultaneous instances of high voltage and high temperatures adversely affect battery life, and in extreme cases can lead to their self-destruction. In addition to potential adverse effects of simultaneous high temperature & high voltage, coin cells and thin film batteries have capacity issues due to their small form factor. Shunt architecture basics & benefits A shunt reference is a current-fed, two terminal device that draws no current until the target voltage is reached. A shunt reference is used like a Zener diode and is often shown on a circuit schematic as a Zener diode. However, most shunt references are actually based on a bandgap reference voltage. A shunt reference requires only a single external resistor to regulate its output voltage making it extremely easy to use. There is no maximum input voltage limit, and the minimum input voltage is set by the value of the reference voltage because some headroom is required for proper operation. Further, shunt references have good stability over a wide range of currents. Many shunts are also stable with large or small capacitive loads. A simple solution Any solution to satisfy the battery charger IC design constraints outlined above would have to combine a shunt regulator's characteristics and those of a battery charging IC with the ability to charge from low power continuous or intermittent sources. Such a device would also need to protect and extract the maximum performance from a Lithium-ion/Polymer battery, coin cell, or thin film battery. Linear Technology has developed the industry's first shunt-architecture battery charger. The LTC4070 is an easy-to-use, tiny shunt battery charger system IC for Li-Ion/Polymer batteries, coin cells, or thin film batteries. With its 450nA operating current, the IC protects batteries and charges them from previously unusable very low current, intermittent or continuous charging sources. The LTC4070's charge current may be boosted from 50mA up to 500mA with the addition of an external PMOS shunt device. An internal thermal battery conditioner reduces the float voltage to protect Li-Ion/Polymer cells at elevated battery temperatures. Multiple-cell battery stacks can be charged and balanced by configuring several LTC4070s in series. Housed in a low profile (0.75mm) 8-lead 2mm x 3mm DFN package, the LTC4070 provides a complete and ultra-compact charger solution with just a single external resistor required in series with the input voltage. The device's feature set suits it well for both continuous and intermittent, lower power charging source applications including Lithium-Ion/Polymer battery backup, thin film batteries, coin cell batteries, memory backup, solar-powered systems, embedded automotive and energy harvesting. With pin-selectable settings of 4.0V, 4.1V, and 4.2V, the LTC4070's 1% accurate battery float voltage allows the user to make tradeoffs between battery energy density and lifetime. Independent low battery and high battery supervisory status outputs indicate a discharged or fully charged battery. In conjunction with an external PFET in series with the load, the low battery status output enables a latch-off function that automatically disconnects the system load from the battery to protect the battery from deep discharge. In addition to its compact 2mmx3mm 8-lead DFN package, the LTC4070 is also offered in an 8-lead MSOP package. The devices are rated for operation from -40°C to 125°C. 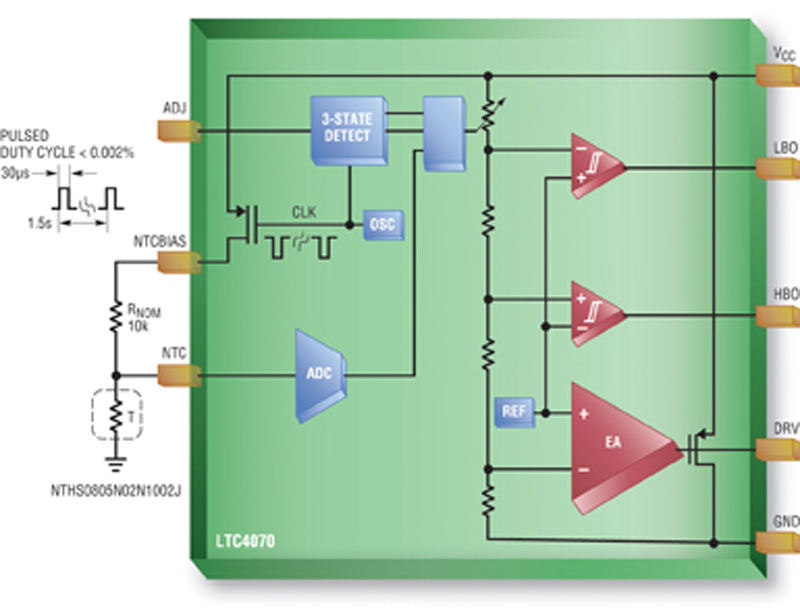 The LTC4070 provides a simple, reliable, and high performance battery protection and charging solution by preventing the battery voltage from exceeding a programmed level. Its shunt architecture requires just one resistor between the input supply and the battery to handle a wide range of battery applications. When the input supply is removed and the battery voltage is below the high battery output threshold, the LTC4070 consumes just 450nA from the battery. While the battery voltage is below the programmed float voltage, the charge rate is determined by the input voltage, the battery voltage, and the input resistor: ICHG = (VIN ? VBAT) / RIN As the battery voltage approaches the float voltage, the LTC4070 shunts current away from the battery thereby reducing the charge current. The LTC4070 can shunt up to 50mA with a float voltage accuracy of ±1% over temperature. The shunt current limits the maximum charge current, but the 50mA internal capability can be increased by adding an external P-channel MOSFET; refer to Figure 1. Internally, the LTC4070 features a P-channel MOSFET being driven by amplifier EA (refer to Figure 2). Zero current will flow in that device until the voltage between VCC and GND reaches VF (i.e. the shunt voltage). VF can be modified by ADJ and NTC, but it is always between 3.8V and 4.2V. If the VCC voltage is below this level, then the current in the PFET is zero. If the voltage across VCC attempts to rise above VF, then current will flow in that device in an attempt to prevent the voltage from rising - this is the shunt current. The operating current is the current required to power all of the rest of the circuitry in the chip. If no external power supply is present, then this is the current that will be drawn from the battery. When the battery voltage is low, more voltage is placed across the input resistor, so the current into the battery (i.e. charge current) is slightly bigger than when the battery is fully charged. When the battery is fully charged, no current goes into the battery, and all of the input current goes into the shunt. Operating current is important because is sets a lower limit on the current capability of "practical" input sources. Obviously, an input source with just 100nA of drive capability would not be able to charge a battery with LTC4070. However, with 1uA of drive capability, there is a small amount of current left to charge. If 10uA of drive capability is available, then more than 90% of that current is available for charging. 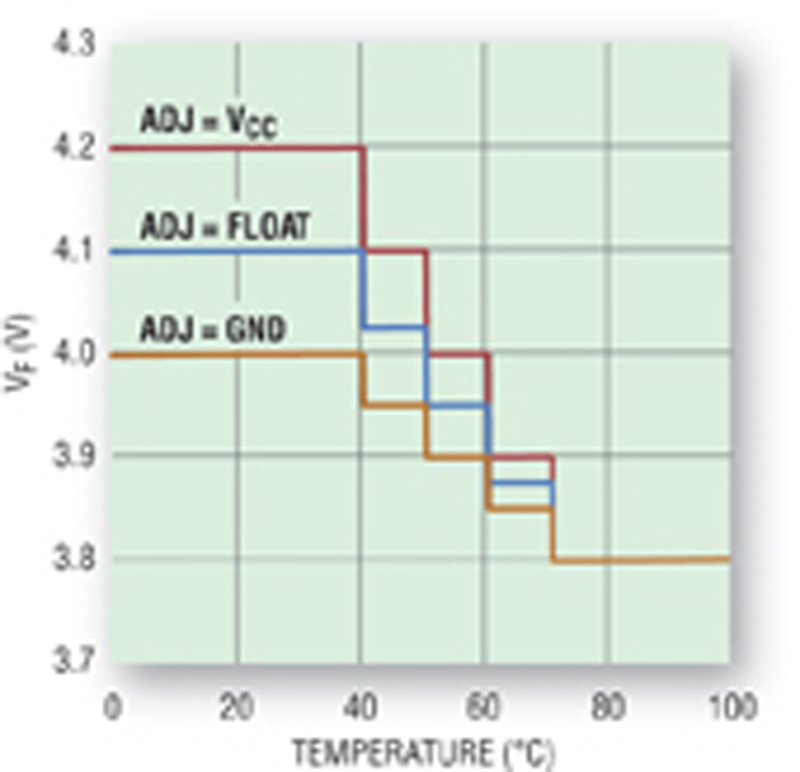 NTC Battery conditioning circuit protects batteries The LTC4070 measures battery temperature with a negative temperature coefficient thermistor thermally coupled to the battery. NTC thermistors have temperature characteristics which are specified in resistance-temperature conversion tables. Internal NTC circuitry protects the battery from excessive heat by reducing the float voltage for each 10°C rise in temperature above 40°C (see Figure 3 for details) The LTC4070 uses a ratio of resistor values to measure battery temperature. The LTC4070 contains an internal fixed resistor voltage divider from NTCBIAS to GND with four tap points. The voltages at these tap points are periodically compared against the voltage at the NTC pin to measure battery temperature. To conserve power, the battery temperature is measured periodically by biasing the NTCBIAS pin to VCC about once every 1.5 seconds. Other key features The LTC4070 has a built-in 3-state decoder connected to the ADJ pin to provide three programmable float voltages: 4.0V, 4.1V, or 4.2V. The float voltage is programmed to 4.0V when ADJ is tied to GND, 4.1V when ADJ is floating, and 4.2V when ADJ is tied to VCC. The state of the ADJ pin is sampled about once every 1.5 seconds. When it is being sampled, the LTC4070 applies a relatively low impedance voltage at the ADJ pin. This technique prevents low level board leakage from corrupting the programmed float voltage. Eliminating resistors not only saves solution size but reduces quiescent current as high-valued resistors are not needed. The device also contains status outputs and signaling capability. The High Battery Monitor Output HBO is an active high CMOS output that indicates that the battery is fully charged and current is being shunted away from BAT. The Low Battery Monitor Output LBO is also an active high CMOS output that indicates when the battery is discharged below 3.2V. Finally, the external drive output pin, DRV, may be connected to the gate of an external PFET to increase shunt current for applications that require more than 50mA charge current (maximum 500mA). Conclusion Shunt references have many applications, and depending on their feature set, they can even be used to charge a battery. However, this type of implementation has many drawbacks including high quiescent current and lack of battery protection features. Low-power energy harvesting applications are now primed for conditioning by the right type of DC-DC converter or battery charger. Linear Technology developed the LTC4070 shunt charger system for Li-Ion/Polymer cells, coin cells and thin film batteries, to provide a simple, effective battery charging solution for cutting edge applications with low-power sources. www.linear.com