In the first article in this series, how gallium nitride(GaN)-on-silicon low voltage power devices have enabled many new applications, such as light detection and ranging(LiDAR), envelope tracking, and wireless powerwas discussed. These new applications have helped develop a strong supply chain, low production costs, and an enviable reliability record for GaN devices. All of this fundamental work with GaN provides adequate incentive for the more conservative design engineers in more mainstream applications, such as DC–DC converters, AC/DC converters, and automotiveto start their evaluation process.  In this edition, the first of these traditional applications, the 48 V DC/DC converter will be examined.

With the power architecture transition from a 12 V to a 48 V bus power distribution in modern data centers, there is an increased demand to improve 48 V power conversion efficiency and power density. In this context, DC-DC converters designed using eGaN® FETs and ICs provide a high efficiency and high power density solution. Additionally, with the advent of 48 V power systems in mild-hybrid, hybrid and plug-in hybrid electric vehicles, GaN transistors can provide a reduction in size, weight, and Bill of Materials (BOM) cost.

Automotive technology has entered a renaissance with the emergence of autonomous cars and electric propulsion as the driving forces.  IHS Markit estimates that 12 million cars will be autonomous by 2035 and, by the same year, 32 million cars will have electric propulsion according to Bloomberg New Energy Finance, Marklines.  Both trends translate into a large growth in demand for power semiconductors.

Within the car, the need for 48 V bus power distribution has become evident with all the new power hungry electronically-driven functions and features appearing on the latest cars. These features include electric start-stop, electric steering, electric suspension, electric turbo-supercharging, and variable speed air conditioning, to name just a few examples.  And now, with the emergence of autonomous vehicles, additional demands from systems such as LiDAR, radar, camera, and powerful graphics processors, are placed upon the power distribution system. These graphic processors in particular are very power hungry and put a large additional burden on traditional automotive 12 V electrical distribution buses.

The solution to providing the high-power levels to increased electrical loads turns out to be a similar solution to the one being applied to high performance gaming systems, high performance servers, artificial intelligence systems, and even cryptocurrency mining – a 48 V distribution bus.

Meeting the Demands of the Modern Data Center

In addition to the automotive requirements mentioned, emerging advanced computing applications demand more power in much smaller form factors. On top of the expanding needs of the server market, some of the most challenging applications are multi-user gaming systems,  artificial intelligence, and cryptocurrency mining. Using eGaN FETs and ICs to build the smallest and most efficient 48 V – 12 V DC/DC converter suitable for these high-performance computing applications increases the efficiency, shrinks the size, and reduces the overall system cost.

The EPC9205GaN-based power module, configured as a synchronous buck converter, yields a power density of 1400 W/in3 when operating at 48 V input, 12 V output and a 10 A load. This design can produce an output voltage ranging from 5 V to 12 V and deliver 14 A per phase of output current.

TheEPC2045, shown in figure 1, the latest generation eGaN, FET, rated at 100 V with 7 mΩ on-resistance, is capable of carrying a continuous current of 16 A. Moreover, the EPC2045is nearly one fifth the footprint of a comparable Si MOSFET and was chosen because it has lower parasitic capacitances and can switch much faster than equivalent silicon devices, yielding lowest switching loss even at higher switching frequency 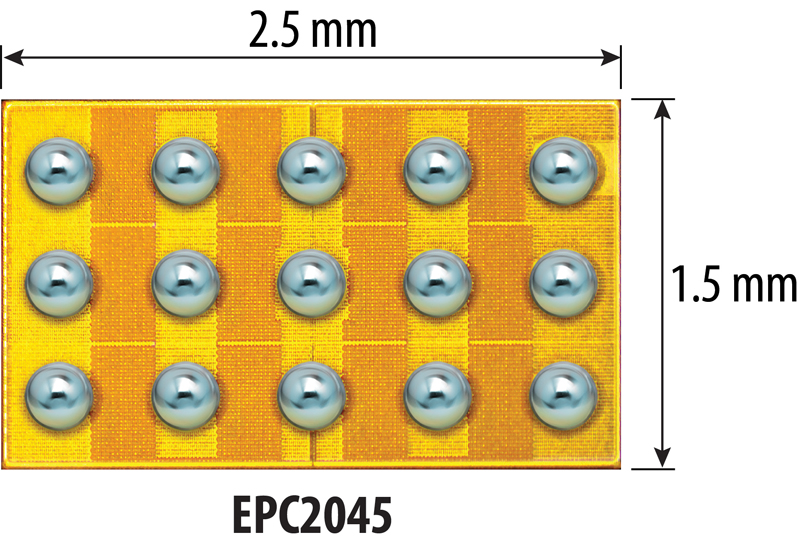 The EPC9205(figure 2) power module, with the block diagram schematic shown in figure 3, is configured in a synchronous buck topology that uses two EPC2045eGaN FETs. The EPC9205power module, shown in figure 2, also features the uP1966A half-bridge gate driver IC from uPI Semiconductor Corp., input and output filters, as well as current and temperature sensing. The high frequency capability of eGaN FETs greatly reduces the filtering requirements, allowing for an optimized output filter inductor with much smaller size and lower loss. 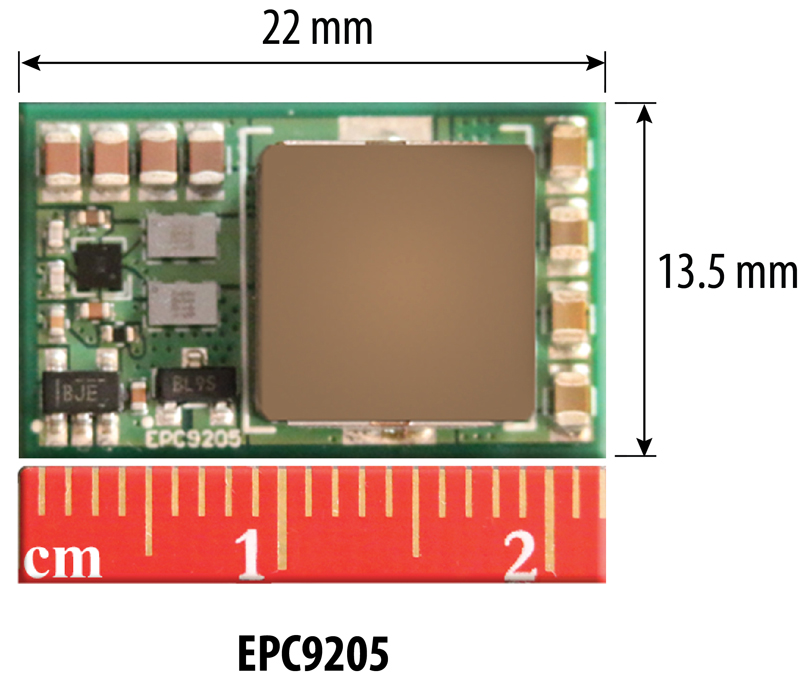 Figure 2: Development board boost a power density of 1400 W/in3 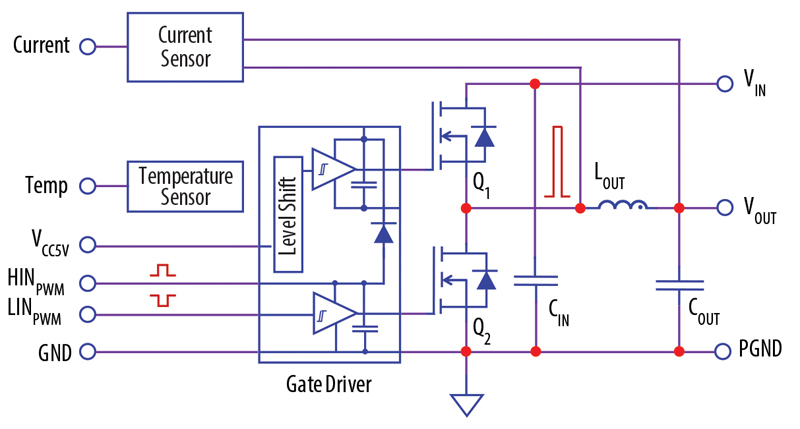 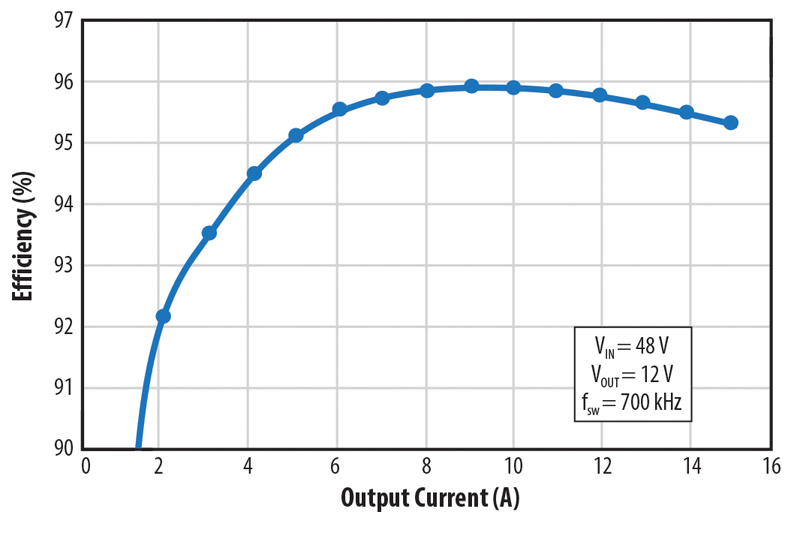 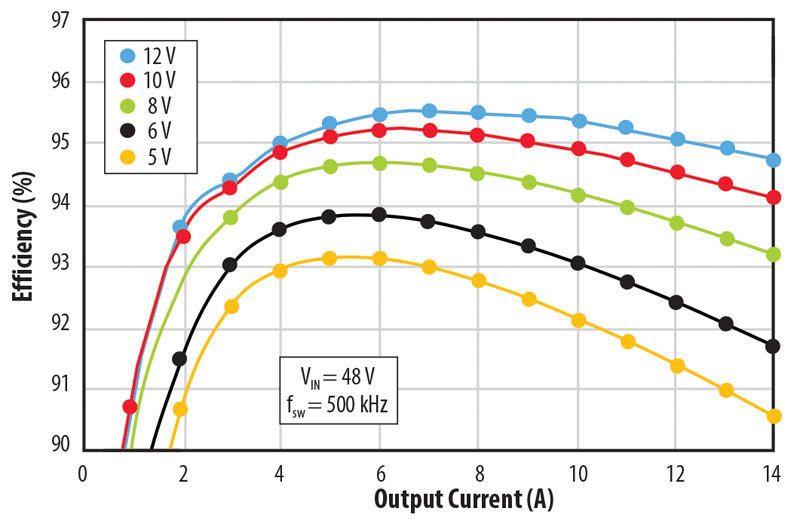 For benchmarking purposes, a silicon MOSFET-based design is compared with the EPC9205in figure 6. The Si MOSFET design used a lower switching frequency of 300 kHz, and the largest volume 5.6 µH inductor from series IHLP-5050FD-01 (Vishay) was selected. The electrical performance comparison with Si design is shown figure 6. 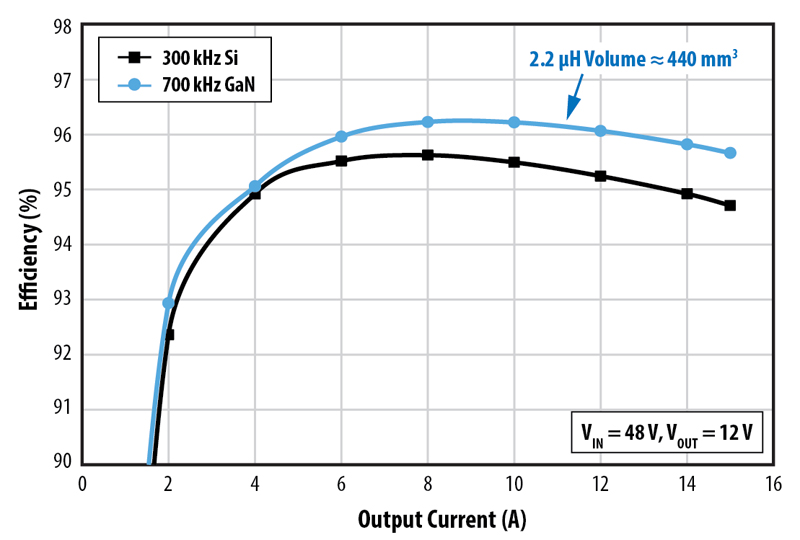 Migrating an intermediate 48 V to 5 − 12 V bus converter design from silicon MOSFETs to eGaN FETs offers reduction in both size and cost, while maintaining or exceeding efficiency targets. The bill of materials of an eGaN-based 48 V to 12 V buck converter yields a cost per watt of less than $0.05. This same bill of materials can be used for output voltages as low as 5 V.

Suitable controllers for the EPC9205include the TPS53632G from Texas Instruments. When the EPC9205is configured in a multi-phase system for higher output current the dsPIC33EP128GS704 from Mircochip can be used.

The eGaN FET based 48 V to 5 − 12 V, 10 A load converter was demonstrated to yield 5−12 V output with a peak efficiency of 96%, a power density of 1400 W/in3, and a cost that can go below $0.05 per watt when operated with 12 V output.  This establishes eGaN FETs as a faster, more efficient and low-cost semiconductor solution for a fast-growing portfolio of very high performance, very high power density 48 V applications, most notably data center power delivery and automotive applications.