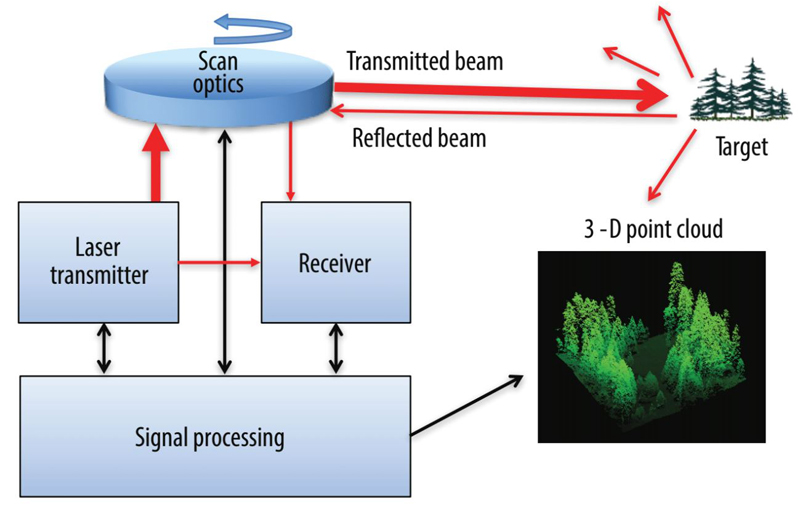 How to Build an Ultra-Fast High-Power Laser Driver using eGaN® FETs - That Sees Farther, Better, and at a Lower Cost!

In the first article in this series, how gallium nitride (GaN)-on-silicon low voltage power devices have enabled many new applications, such as light detection and ranging (LiDAR), envelope tracking, and wireless power was discussed. In this article, more detail on one of these leading applications, LiDAR, will be explored. How GaN is being used to make LiDAR systems that see farther, with higher resolution, and at lower cost will be shown.

Light Detection and Ranging (LiDAR) is a remote sensing technology which transmits pulses of light from the sensor and measures the reflection to determine the location and distance of objects. If a laser is used as the optical source, the distance of a small spot even at a long range can be measured. When combined with steerable optics, it is possible to sweep the spot distance measurement and map objects in 3-D space, as shown in figure 1.

For applications such as autonomous and assisted driving, where the LiDAR system provides the ‘eyes’ for the vehicle, short pulses are needed to achieve the necessary distance resolution – as short as a few nanoseconds or even less. These pulses are typically generated using a laser diode. To get sufficient range, the peak optical power must be high, which means laser diode current peak values of 10s to 100s of amps. Until recently, this required the use of complex circuits and unusual, expensive semiconductors.

A typical pulsed laser driver for LiDAR uses a semiconductor switch in series with the laser and an electrical energy source. Performance is limited by stray inductance and the speed of the semiconductor power switch. Within the last decade, cost-effective gallium nitride (GaN) power FETs and ICs have become commercially available, with significantly lower inductance and switching figures of merit (FOMs) up to 10x better than comparable silicon MOSFETs.

With the advent of eGaN® FETs and ICs, the desired performance becomes possible with simple, small circuits at low costs. Three of the most popular FETs for LiDAR are the EPC2036, EPC2016C and the EPC2001C, shown in figure 2. The greatly improved performance of eGaN FETs versus older silicon MOSFET technology translates to much faster switching for a given peak current capability, enabling currents >100 A and pulse widths <2 ns with a laser load, although these cannot be met simultaneously (yet!). The extremely high performance of GaN and the ultra-low inductance of the chip-scale package make eGaN FETs the ideal switches for pulsed laser drivers. 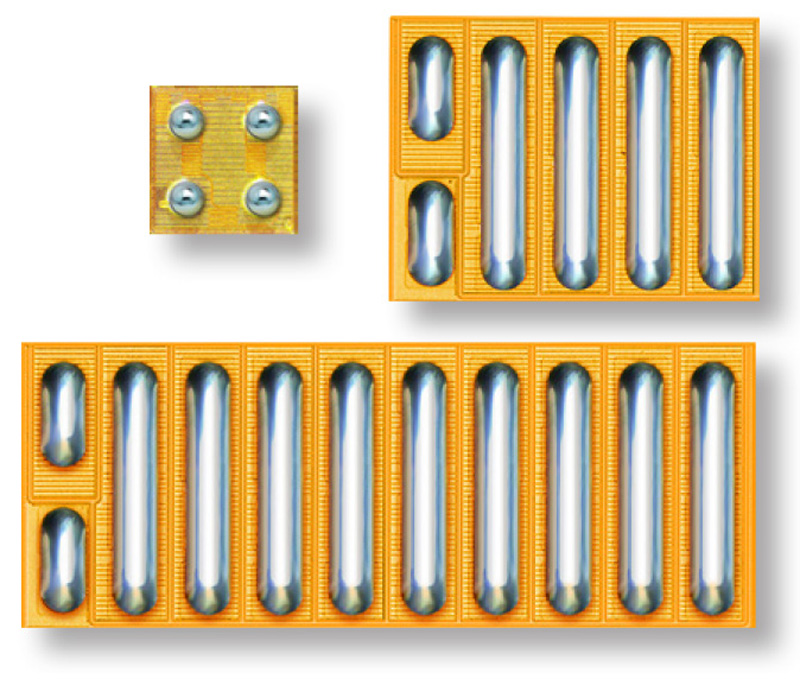 How to Build an Ultra-Fast High-Power Laser Driver

The simplest and most common laser driver is the resonant capacitive discharge driver, shown in figure 3. FET Q1 discharges C1 resonantly through the stray inductance L1 and laser DL. To overcome inductance L1 and achieve the fast current rise-time desired, C1 is charged to a relatively high voltage (usually 25 V to 150 V). FET Q1 must be able to withstand the voltage, conduct the peak current, and turn on in 1 ns or less. The eGaN FET is the only readily available, cost-effective semiconductor switch that can meet these requirements.

The EPC9126 and EPC9126 HC laser driver demonstration systems are designed to minimize inductance using the same basic optimal layout principles recommended for EPC power conversion applications. The EPC9126 comes populated with the EPC2016C and generates 35 A pulses less than 4ns wide into a triple junction laser. Its high current companion, the EPC9126HC, can generate pulses of 65 A that are less than 8 ns wide. Both drivers have built-in sensing of key waveforms and can accommodate multiple laser packages. Figure 4 shows the EPC9126/HC.

For the utmost in performance, the PCB can be optimized for a particular laser and paired with a high-performance gate drive such as the Texas Instruments LMG1020. Using a low inductance surface mount laser such as the Excelitas TPGAD1S09H, the EPC2016C can achieve 26 A, 1.8 ns pulses (figure 5). For very high peak power (> 4 kW), the 200 VEPC2047, with a pulse current rating of 160 A, can achieve 8 ns, 155 A pulses with the same driver and laser (figure 6). 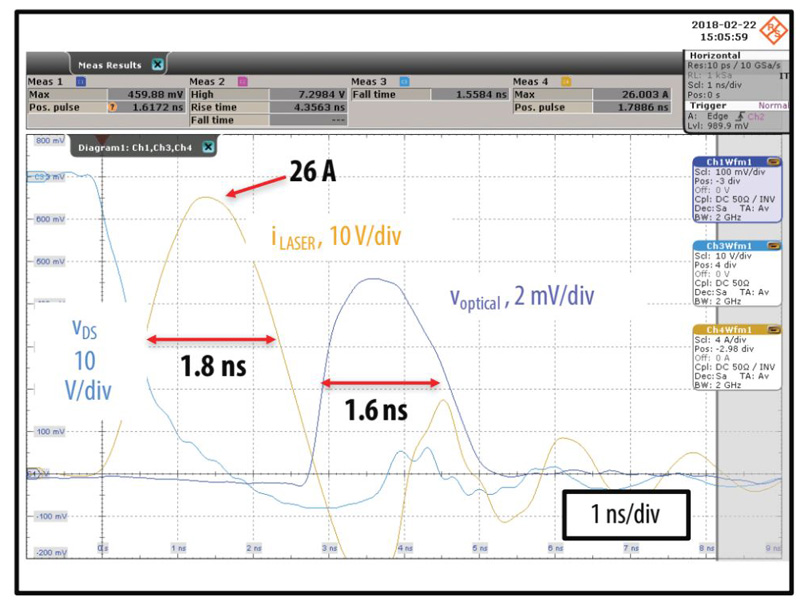 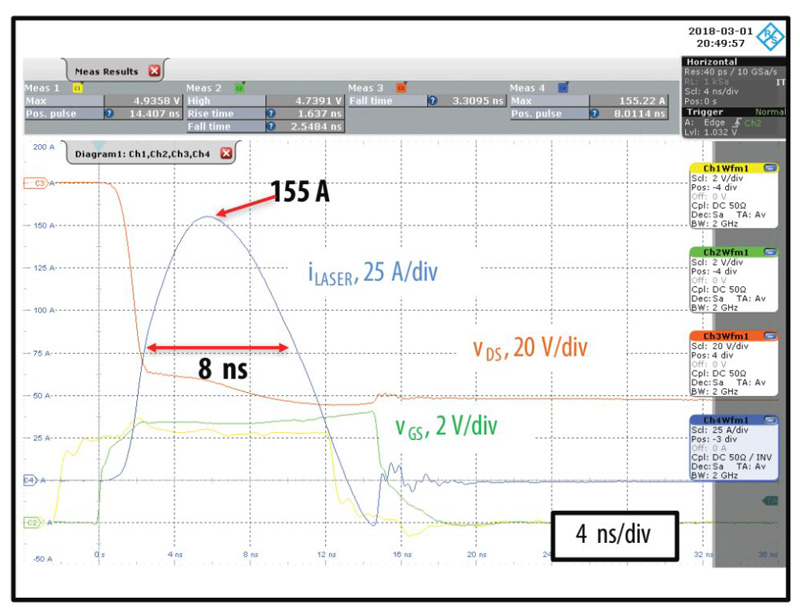 The superior performance of GaN power transistors enable groundbreaking laser driver performance. The ability to generate single digit nanosecond, high current pulses to deliver hundreds of watts from a few square millimeters is truly remarkable. It is one of the main factors in making affordable, high performance LiDAR possible in a small form factor thus fueling the LiDAR revolution.