The Wave Power Farm off Mutriku Could Improve its Efficiency 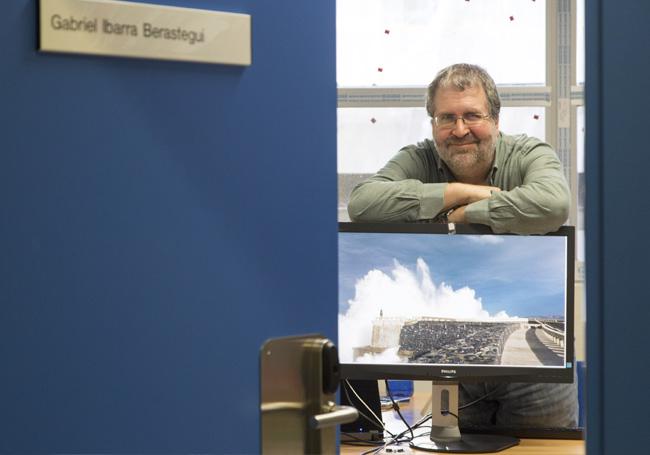 Gabriel Ibarra in his office at the university. On the computer a picture of Mutriku.

The offshore power plant or wave farm at Mutriku is the only commercial facility (it is not a prototype) in the world that operates by regularly feeding the grid with electrical power produced by waves. It has been operating since 2011 and the study by the UPV/EHU's EOLO group analysed its behaviour during the 2014-2016 period. "It is important to find out how the wave power farm is actually performing, to analyse how the technology used is behaving, and to observe what deficiencies or advantages it has in order to help to improve it," said Gabriel Ibarra-Berastegi, the lead author of the study. "Extracting energy from the waves is in its early stages and various types of devices and technologies are currently being developed. They include the OWC (Oscillating Water Column) technology used at Mutriku," he added.

In OWC technology the turbines are not driven by the waves directly but by a mass of compressed air. It is a structure in which the upper part forms an air chamber and the lower part is submerged in the water. That way the turbine takes advantage of the movement produced by the wave both when it advances and recedes, and the generator to which it is coupled feeds the power into the grid. "The turbines generate electricity which is regularly sold to the electricity grid. In the case of Mutriku this happens 75% of the time. The plant shuts down from time to time when the waves are very calm or even when they are too rough," explained Ibarra.

The research focussed on the study and analysis of the operational data provided by the Basque Energy Agency, which manages the plant. After analysing and ordering these data, "we saw that one output indicator is the Capacity Factor (CF), which allows different technologies for producing electricity to be compared," explained the lead researcher of the article. "In this case we calculated the CF of the Mutriku farm and its value is 0.11, while wind energy facilities have a CF in the region of 0.2-0.3, and solar plants 0.4. That indicates that the OWC technology at Mutriku needs to improve its CF to put it on a par with the values of the remaining renewable energy sources," said Ibarra. "We believe that the way to achieve this is to improve the regulation and control of the speed at which the turbines rotate, in other words, to properly manage the speed at which the turbine rotates in relation to the advancing waves," he concluded.

According to Gabriel Ibarra, "these conclusions drawn from the data on a real farm like that of Mutriku constitute a step forward whereby it is possible to focus and identify the next steps to be taken so that OWC technology can attain a level of maturity, thus facilitating the introduction and deployment of these farms".