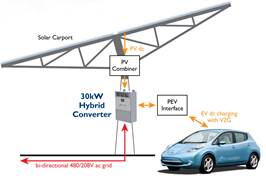 Ideal Power Converters, a developer of disruptive electronic power converter solutions, announced the release of its 30kW 3-Port Hybrid Converter, which is expected to reduce the costs and improve the efficiency of systems that integrate photovoltaic (PV), grid-storage, and electric vehicle (EV) charging. IPC will present and showcase the 3-Port Hybrid Converter at the National Innovation Conference in Washington, DC, May 14-15, where it has been awarded the prestigious National Innovation Award. The initial hardware development of the 3-Port Hybrid Converter was completed in less than six months under an SBIR Phase I award from the Solar Energy Technologies Office at the U.S. Department of Energy. Additional software development and industry certification will be required before the grid-tied product is expected to be available in late 2013. "Hybrid power conversion systems are needed to turn intermittent PV power into reliable power for mitigating peak loads, providing backup power and for off-grid applications," said Paul Bundschuh, Chief Executive Officer of IPC. "Existing hybrid converters require multiple power converter stages, adding to costs and efficiency losses. IPC's 3-Port Hybrid Converter is expected to reduce weight and logistic costs by up to 90 percent, as well as PV-to-grid efficiency losses by up to 50 percent." The 3-Port Hybrid Converter includes three bi-directional ports, one AC grid port and two independent DC ports - either of which can be used for PV, battery storage, or EVs. The system is designed to allow power to flow in any mix among any ports with 96.5 percent estimated CEC efficiency. IPC's 30kW 3-Port Hybrid Converter weighs about 125lbs and provides a power density (Watt/lbs) which the Company believes is ten times higher than other hybrid power converters and is expected to reduce manufacturing, shipping, installation and maintenance costs. By breaking the efficiency and cost bottlenecks of hybrid converters, it may become more practical to widely deploy combined PV and battery systems in the emerging markets of combined PV and grid storage, hybrid EV charging infrastructure, and micro-grids for billions of individuals globally that lack access to stable electric power. IPC is working with the National Renewable Energy Laboratory (NREL) under a Cooperative Research and Development Agreement to verify the converter's capabilities and jointly develop reference designs for hybrid EV charging infrastructure. The Company is also working with leading commercial and government customers on utilizing this product in next-generation EV charging infrastructure and hybrid PV-battery systems for commercial buildings. Ideal Power Converters