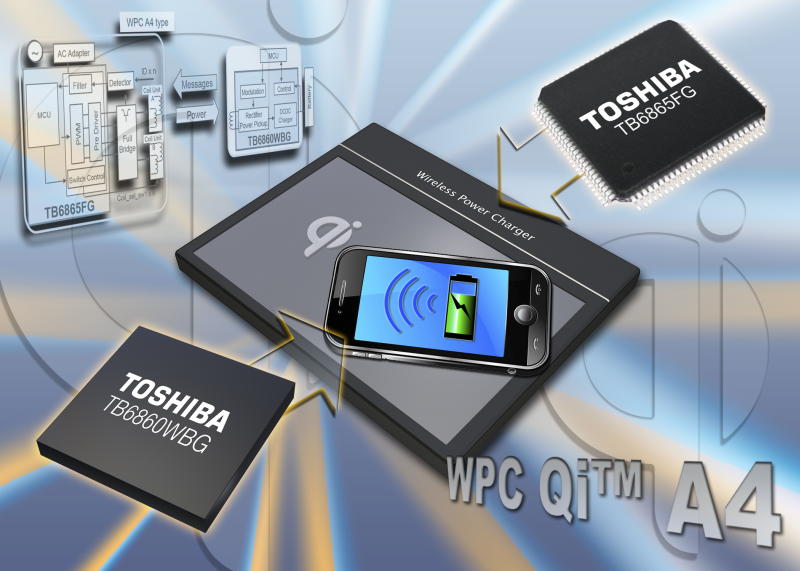 Toshiba Electronics Europe has announced a free-positioning wireless charging chipset consisting of a high-efficiency power transmitter and receiver for charging smartphones and other mobile products located anywhere on the battery-charging pad. The Toshiba chipset is fully compliant with the WPC (Wireless Power Consortium) Qi interface specification A4, A8, A12, and A14. The chipset includes the TB6865FG power transmitter and TB6860WBG receiver and features a two-coil control architecture for cost-effective battery charging. The TB6865FG detects the position of a mobile device and only one of the coils is energized for charging, thereby preserving efficiency and allowing product freedom of placement. As a result, end users can place a Qi-capable mobile product on a Qi compliant charging surface and achieve up to 74% better efficiency across a majority of the charging area. (Note: Charging systems can achieve rated efficiency except at the four edges of the charging pad and within few millimetreers above the charging pad.) In addition, the design flexibility of the TB6865FG allows the control of two coils, so one pad can charge two mobile products simultaneously. Toshiba's builds the new chipset with the company's microcontroller and analogue IC technology and features high levels of integration to reduce component count, board space, and cost in wireless-charging applications. The TB6865FG transmitter integrates both microcontroller and analogue elements including PWM circuitry, switching control, on-board filter, and a pre-driver circuit. The TB6860WBG receiver combines modulation and control circuitry with a rectifier power pickup, built-in high-performance DC-DC buck converter, and protection functions. The TB6860WBG offers a programmable charging profile via I2C control. The latter provides an integrated DC-DC converter for high-efficiency high-current charging with a charge current of up to 1.2 A. Integrated protection for the receiver IC covers metal detection and input voltage, output current, and over-temperature conditions. Toshiba supplies the TB6865FG is in a LQFP100 14- x 14-mm package and the TB6860WBG as a WCSP39 4.29- x 2.69-mm device. Toshiba has been a member of the WPC since it joined the consortium in 2011. In addition to wireless-charging products built around inductive coupling, the company is also actively involved in research to develop technologies that extend charging distances through resonance coupling. Toshiba