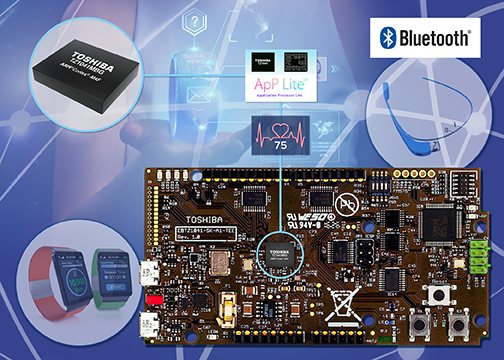 Toshiba’s kit incorporates the company’s TZ1041MBG ‘sensor hub’ application processor. This processor is based on a high-performance 32-bit ARM Cortex-M4F processor and acts as a hub to collect, process and store data from multiple sources. It then transfers the raw or processed data to external devices such as smartphones and tablets using an integrated Bluetooth® wireless communication function.

The EBTZ1041-SK-A1 evaluation board combines the TZ1041MBG processor with an Arduino UNO R3-compatible header that allows developers to connect to commercially available Arduino shields. In addition to the integrated Bluetooth®, a dedicated header to connect to Toshiba’s TC32306 single-chip RF transceiver further supports sub-GHz wireless communications. An on-board CMSIS-DAP debug interface is provided as standard. Alternative debuggers can be connected via the board’s 9-pin SWD connector.

Toshiba’s TZ1041MBG allows peripheral devices and sensors - for example MEMS sensors such as atmospheric pressure sensors and moisture sensors – to be connected via various integrated USB, UART, SPI, I2C and 12-bit ADC interfaces. Other external sensors can be directly connected to the three input channels of the device’s integrated 24-bit high-resolution ΔΣADC - this allows for accurate measurement of biomedical signals including pulse rates and electrocardiograms. This accurate data is collected and processed by the high-performance ARM Cortex®-M4F with DSP instructions and a floating point processing unit.


Other members of the Toshiba family are the TZ1011MBG, TZ1031MBG and TZ1021MBG. The first two also integrate accelerometer and gyroscope, the TZ1011 also contains a magnetometer sensors. The latter does not feature integrated sensors and BLE functionality.

As well as the starter kit hardware, wearables developers have access to Toshiba software algorithms for the TZ1000 series. These include Activity Monitoring, PPG (Photoplethysmography) Monitoring and ECG (electrocardiography) Monitoring.