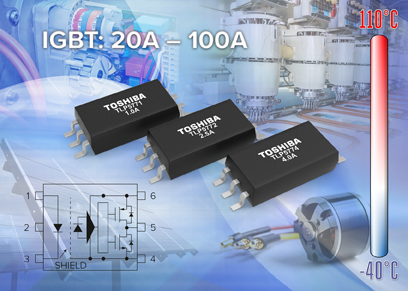 The TLP5771, TLP5772 and TLP5774 have respective peak output currents of 1.0A, 2.5A and 4.0A, allowing the series to meet a wide range of user requirements. In addition, because minimum operating voltage is 10V compared to the 15V of previous devices[1], the new couplers contribute to higher system efficiency and lower power consumption.

All of the new devices are housed in a low-profile 2.3mm SO6L package that supports the development of thinner and smaller systems. Minimum isolation voltage rating is 5000Vrms and operating temperature is from -40˚C to 110˚C.