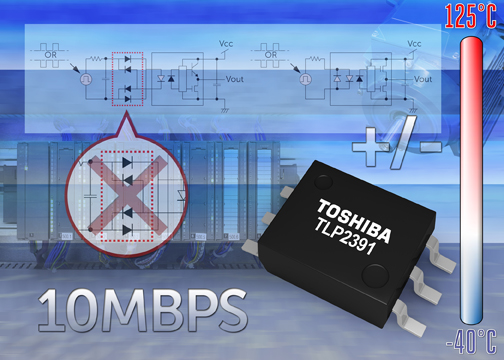 Toshiba Electronics Europe has announced their latest high-speed photocoupler targeted at servo motors and programmable logic controllers (PLCs) that is operable in both plus and minus LED input currents. Use of the TLP2391 will enable developers to eliminate multiple bridge circuits from many applications, reducing board size, power consumption and BOM.

In some devices, such as PLCs, input signals to photocouplers may have different polarities such as sink logic and source logic signals. In many cases bridge diodes are included in circuits in front of the photocouplers used for input interfaces. The TLP2391 is able to eliminate such bridge circuits by combining two opposite parallel LEDs, allowing it to support both sink and source logic signals. This ability to replace multiple bridge circuits provides the potential to enable PCB sizes and costs to be significantly reduced. TLP2391 also contributes to reductions in equipment power consumption as it is operable at a low input current of 2.3mA (at Vcc=3.3V) and features a low supply current of 1mA.

Supporting throughput of up to 10Mbps, TLP2391 is well suited to communication interfaces, such as RS232, RS422 and RS485, for industrial and related applications. It has a guaranteed maximum propagation delay time of 100ns with distribution of 30ns (max) and skew of 40ns.

The TLP2391 photocoupler is housed in a SO6 package with maximum height of 2.3mm, which guarantees minimum creepage and clearance distances of 5mm. Isolation voltage between input and output is 3.75kVrms, sufficient for industrial applications, and it is certified to international safety standards including UL1577 and EN60747-5-5.