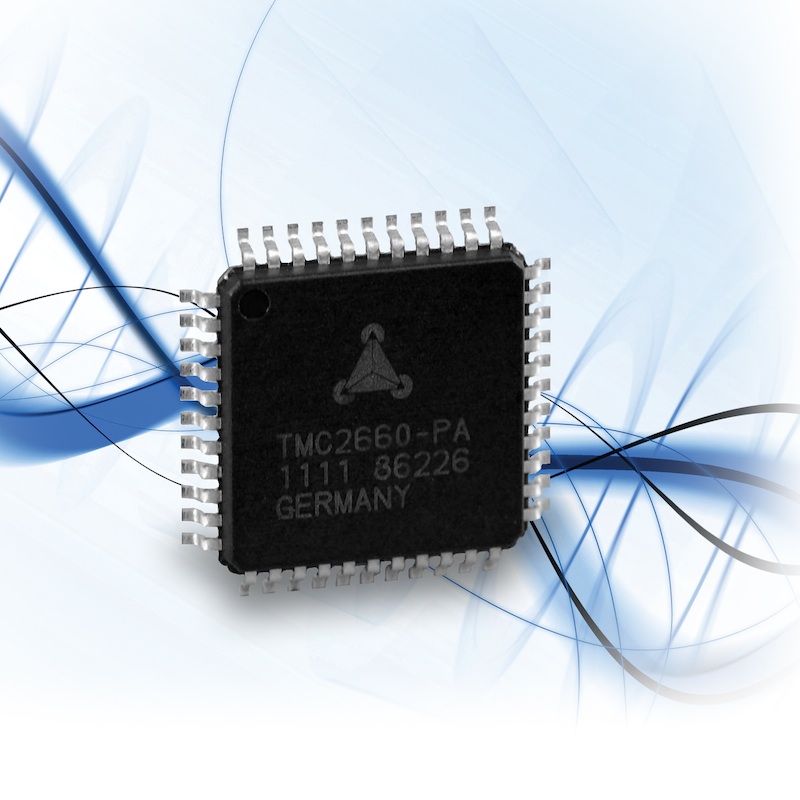 TRINAMIC Motion Control, a leading global developer of motor and motion control technologies, expanded the company's existing product line of micro-stepping motor drives with a new IC that supports motor drive currents up to 4A. The TMC2660 integrates both a pre-driver for real-time calculation of motor coil current values, and power MOSFETS for amplification of coil outputs to directly drive an external motor. Packaged in a single multi-chip module, the integrated driver/amplifier achieves the lowest power dissipation currently available for a 4A stepper motor driver. With an Rds(on) of 65m, the TMC2660 dissipates just 2.8W at 4A, an 85% reduction compared with the most competitive solution previously available. The new device's minimal power dissipation eliminates the need for a heat sink, enabling highly dense board designs and reduced component count and cost. "Our popular TMC260 and TMC261 Stepper Motor Drivers have been widely adopted by manufacturers worldwide," explained TRINAMIC Founder and CEO Michael Randt. "Our customer base requested that we expand our line to support higher current levels, and we responded by introducing the TMC2660." With a peak output current rating of 4A, the TMC2660 can drive motors as large as NEMA 23. The new device is both pin- and software-compatible with TRINAMIC's popular TMC260/261 devices, which support motors up to NEMA 17. Stepper motors are a cost-effective solution for applications that require high-torque at low speeds and precise control of motor axis rotation. Widely used in printers, scanners, robotics, medical and scientific equipment and other applications, TRINAMIC estimates that more than one billion stepper motors are shipped ever year. The TMC2660 is sampling in August 2013, and production volumes will be offered in Q4 2013. The device is available in a 44-pin PQFP package, priced at USD 2.90 in 1,000 unit volumes. To support rapid product development and prototyping, TRINAMIC offers a complete TMC2660 design kit with evaluation board, as well as an Arduino daughter card (shield). TRINAMIC