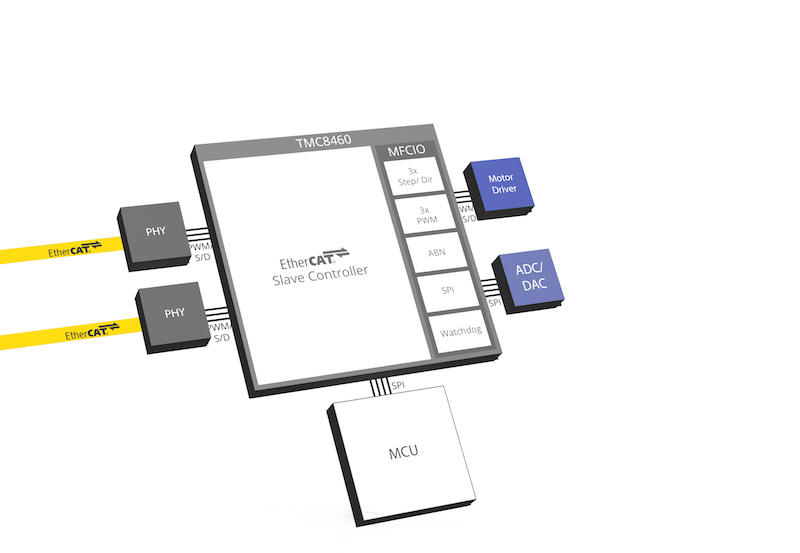 TRINAMIC, a leading provider of motion control technologies, announced a new EtherCAT-compliant slave controller IC. It is the worlds first EtherCAT slave controller to integrate real-time, latency-free I/O peripherals. The new TMC8460 slaver controller is also the first device in a new EtherCAT-compliant interface product line currently under development at TRINAMIC, based on the companys active membership in the EtherCAT Technology Group.

TRINAMICs new TMC8460 is the first EtherCAT slave controller IC to incorporate PWM and Step/Dir I/O peripherals that do not require routing through the firmware of an application processor, eliminating latency for applications requiring real-time response. The TMC8460 extends the feature set of the core EtherCAT technology with a broad array of peripherals and features: an integrated smart peripherals block accessible from an MCU or EtherCAT master and, in addition to a PWM unit and Step/Dir interface, an SPI master and encoder interface that can be directly mapped to the PDO (Process Data Object) by the memory manager. This unique SPI interface enables latency-free read from an ADC or write to a DAC.

The IC includes a standalone mode that enables direct mapping of integrated peripherals to bus registers, while in parallel an external MCU can perform higher layer protocol operations. To enable wide interoperability, the TMC8460 communication hardware has been verified as 100% compatible with the existing Beckhoff EtherCAT Slave controller through extensive interoperability testing.

"TRINAMIC has a well-established track record of delivering embedded motor drives with high-level bus interfaces for the industrial motion control market. Were now responding to the increasing demand for EtherCAT support as this standard gains traction around the world, explained TRINAMIC CEO Michael Randt. We are meeting an increasing demand for cutting-edge, real-time operation where jitter and latency caused by routing process data through a protocol stack is not accepted. So we decided to directly connect our EtherCAT slave controller to the motion control specific peripherals."

EtherCAT is a widely adopted communication protocol for industrial applications. Its flexible topology is uniquely suited for complex industrial deployments, which has attracted more than 3,000 member companies worldwide to endorse the standard. As an exceptionally stable standard that industrial developers can rely on for long life cycle products, EtherCAT continues to utilize the same interface first established in 2004, even as the protocol has continued to evolve.

Like all TRINAMIC devices, the TMC8460 benefits from TRINAMICs comprehensive development eco-system, called Landungsbrücke, which includes evaluation boards, reference designs and, for this new device, sample EtherCAT software stacks for Cortex MCUs. All configuration and parameterization tools are incorporated into TRINAMICs Integrated Development Environment. The device can be used with any MCU that comes with an SPI interface, or standalone in SPI emulation mode.

As part of TRINAMICs long-term commitment to the EtherCAT market, the company hosted the Spring European EtherCAT Plugfest on April 22-23 in Hamburg. The company is an active supporter of the EtherCAT standard, and focuses the companys innovative technical resources on developing solutions for demanding applications like medical and life science, and semiconductor manufacturing, mounting and test equipment. In the coming quarters TRINAMIC plans to release additional members of its EtherCAT technology product line, which will include highly integrated devices and modules designed to further minimize BOM and board-space.