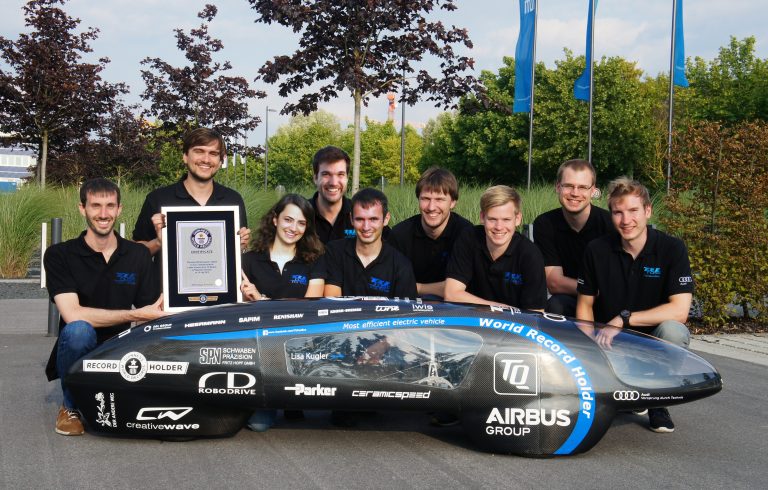 After one year of preparation we achieved our goal: On Saturday, July 16 2016 our world record team undertook the official world record attempt and set a new high mark for vehicle efficiency. The team started at the break of dawn to prepare everything in time at the test track that our long-standing sponsor Audi had reserved for us. Last tests done on the previous day had us hoping for a good chance at reaching our own goal of 1000km/kWh.

As vehicle for the world record attempt we chose eLi14, which we had built for the 2014 season. We saw it as the ideal candidate because it has aerodynamic advantages to our more current models (which are built to newer version of the Shell Eco Marathon competition rules) but is still very light and has a flexible running gear train.

Based on our experiences with eLi15 and eLi16 we tuned up eLi14. Our custom-built motor controller with optimised acceleration and speed simulation, new rims with extremely low friction bearing, a motor with optimised magnet placement and silver wire coils for reduced ohmic losses and an aerodynamically optimised top cover without solar cells were all fitted into eLi14. One nostalgic reason also played a part in choosing eLi14 – at the competitions of the 2014 season, due to disqualifications and technical problems we could not achieve the car’s full potential.

After the track had been inspected and the vehicle was thoroughly checked over by the judges from Guinness World Records as well as Professor Herzog of Technical University Munich and Manfred Schedl of TQ Systems / Robodrive we were able to start our first attempt at 9:30am. After the successful “Installation Lap” the first start attempt gave us a good shock: the motor produced only stutters.

The problem was found and fixed quickly as it was simply the control card of the motor controller that was loose. Shortly afterwards the energy measurement device was once again properly sealed by the judges and we were able to start. Gently eLi14 accelerated to the preset speed to cover the necessary distance of 25 km/h within one hour. This average speed thus complies with that of the Shell Eco-marathon.

60 tense minutes followed – any technical problem, however small, could have cost precious time. But eLi14 completed lap for lap with constant timing and despite turning off the motor early rolled almost a kilometer past the finish line. This demonstration of its enormous glide capability gave us hope for the result. But first the judges had to read off the result and do their calculations to confirm it. We received the first result: 1142 km/kWh. We were ecstatic at this result, eclipsing the goal we had set ourselves by far!

But we knew this was not the end. The conservative first run had to be improved. At once we modified the speed control, changed the rear tire and increased tire pressure. The acceleration profile was also redone and we calculated a new earlier motor shutoff point based on the vehicle’s glide.

The second run completed without any hitches and despite stronger wind was a significant improvement. The final result: 81.16 Wh/100km, equivalent to 1232 km/kWh or 10956 km per litre of 95 octane gasoline (by caloric value). In units more familiar to motorists that is about 0.009l per 100km or, for the United States, 26135mpg.

We proudly received the Guinness World Record certificate and we now proudly hold the title of “most efficient electric vehicle”. We owe a huge debt of gratitude to our sponsors whose engagement enabled us to undertake this endeavour.