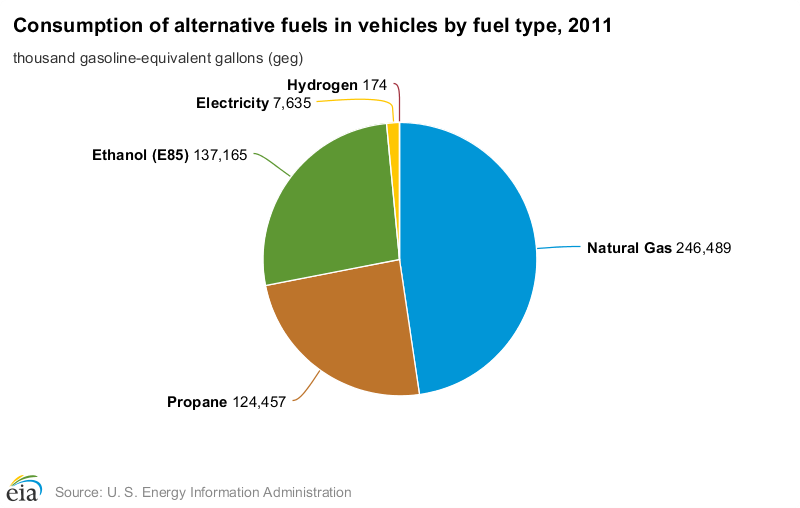 The U. S. Energy Information Administration's new annual "Alternative Fuel Vehicle" report with data for 2011. Highlights of the report include that overall consumption of alternative transportation fuels increased almost 13% in 2011, to a total of 515,920 thousand gasoline-equivalent gallons, compared to 457,755 thousand gasoline-equivalent gallons in 2010. In alternative-fueled vehicles, consumption of ethanol (E85) jumped 52% from the prior year's consumption, an increase from 90,323 thousand gasoline-equivalent gallons in 2010 to 137,165 thousand gasoline-equivalent gallons in 2011, a reflection of the increase in overall inventory of E85-capable vehicles. While inventory and fuel use in automobiles continues to increase, the rise in the use of medium duty vans had a larger impact on fuel consumption due to their higher rate of consumption and, in contrast to light duty vehicles, they are more likely to be utilized as an alternative-fueled vehicle than a traditional gasoline-fueled vehicle. Many fleets meet petroleum reduction requirements by using biodiesel rather than alternative fuels. Changes in biofuel subsidies, specifically replacement fuels like ethanol and biodiesel, affect consumption trends in the marketplace. With the reinstatement of the biodiesel tax credit and the requirements under the Renewable Fuel Standard, consumption of biodiesel grew almost 240% between 2010 and 2011. Consumption of ethanol in gasohol (E10) remained flat between 2010 and 2011 since almost all gasoline in the United States is now blended with 10 percent ethanol. This "blend wall" (the maximum amount that can be blended into standard gasoline without requiring different equipment, warranties or infrastructure) has shifted more ethanol into the E85 sector. Energy Information Administration