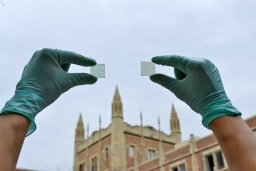 Nearly doubling the efficiency of a breakthrough photovoltaic cell they created last year, UCLA researchers have developed a two-layer, see-through solar film that could be placed on windows, sunroofs, smartphone displays and other surfaces to harvest energy from the sun. The new device is composed of two thin polymer solar cells that collect sunlight and convert it to power. It's more efficient than previous devices, the researchers say, because its two cells absorb more light than single-layer solar devices, because it uses light from a wider portion of the solar spectrum, and because it incorporates a layer of novel materials between the two cells to reduce energy loss. While a tandem-structure transparent organic photovoltaic (TOPV) device developed at UCLA in 2012 converts about 4 percent of the energy it receives from the sun into electric power (its "conversion rate"), the new tandem device — which uses a combination of transparent and semi-transparent cells — achieves a conversion rate of 7.3 percent. Researchers led by Yang Yang, the Carol and Lawrence E. Tannas, Jr., Professor of Engineering at the UCLA Henry Samueli School of Engineering and Applied Science, said the new cells could serve as a power-generating layer on windows and smartphone displays without compromising users' ability to see through the surface. The cells can be produced so that they appear light gray, green or brown, and so can blend with the color and design features of buildings and surfaces. The research was published online July 26 by Energy & Environmental Science, a Royal Society of Chemistry journal, and it will appear later in a published edition of the journal. "Using two solar cells with the new interfacial materials in between produces close to two times the energy we originally observed," said Yang, who is also director of the Nano Renewable Energy Center at the California NanoSystems Institute at UCLA. "We anticipate this device will offer new directions for solar cells, including the creation of solar windows on homes and office buildings." The tandem polymer solar cells are made of a photoactive plastic. A single-cell device absorbs only about 40 percent of the infrared light that passes through. The tandem device — which includes a cell composed of a new infrared-sensitive polymer developed by UCLA researchers — absorbs up to 80 percent of infrared light plus a small amount of visible light. Chun-Chao Chen, a graduate student in the UCLA materials science and engineering department who is the paper's primary author, said using transparent and semi-transparent cells together increases the device's efficiency, and that the materials were processed at low temperatures, making them relatively easy to manufacture. Other authors of the study were Gang Li, a staff researcher in the materials science and engineering department at UCLA; Jing Gao, a materials science and engineering graduate student; and Letian Dou and Wei-Hsuan Chang, graduate students in the UCLA materials science and engineering department and the California NanoSystems Institute. The research was funded by the Air Force Office of Scientific Research, the Office of Naval Research and EFL Tech. UCLA