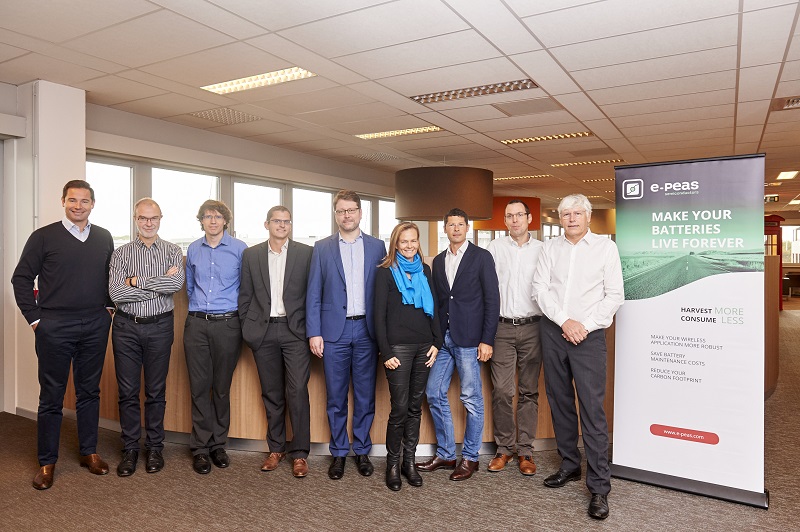 Continuing to make major advances in energy-autonomous technologies, e-peas has just completed a new round of funding of $4.2 million (Euro 3.5 million) from leading investors.

The group of industrial and financial investment firms involved in this funding round, led by Partech Ventures, comprises Airbus Ventures, JCDecaux Holding, Semtech, SRIW and Vives 2 - all well-known and respected investment and technology specialists from US and Europe.

Industry analysts at Gartner have predicted that there will be at least 20 billion Internet of Things (IoT) nodes in operation by 2020, and that this number will continue to rise rapidly over the course of the next decade. The vast majority of IoT nodes will be located in remote places and have severe power constraints to contend with. This is where e-peas’ proprietary technology comes in, with the ambition to power the IoT without batteries or electrical cords.

Having initially gained both local government grants and private seed investment funding back in 2014, e-peas successfully brought its ground-breaking AEM10940 energy harvesting chip to market. Through this device, IoT nodes can draw energy from their surrounding environment, thereby freeing them from the heavy cost and inconvenience of battery replacements and ongoing maintenance. It has already led to e-peas winning several prestigious award nominations, including the highly coveted Electrons d’Or in France.

The new fund raising gives the Belgian start-up the finances needed to further progress its objective of relieving customers from the operational expenses that are normally associated with their IoT sensors. The additional investment will allow the company to strengthen its global business development capability and significantly expand its engineering workforce. Through this it will be able to accelerate the development, production and commercialization of an extended energy harvesting product portfolio, as well as exploring new product propositions and collaborations with other players in key application areas. Among these will be industrial monitoring, home automation, smart agriculture, assets tracking, healthcare, smart metering and wearables.

“With this fund raising, we have gained much more than financial support, we have found experienced partners for our growth that bring e-peas an important market access either directly or through their network, and great insights to improve our operational excellence in the semiconductor market,” states Geoffroy Gosset, co-founder and CEO of e-peas.

"We have been incredibly impressed by the stellar execution and unique skills of the e-peas team, as well as the superiority of their proprietary technology. We see an untapped multi-B$ opportunity with numerous applications in IoT, smart city, industry operations, logistics, and more. The whole Partech Ventures team in the US and Europe is determined to support e-peas in their fast growth both commercially and financially," added Romain Lavault, Board Member and General Partner at Partech Ventures.

"To unleash the full benefit of big data, sensors are being installed everywhere. Until now battery maintenance and wiring costs have prevented mass deployment/dissemination of sensors in the industrial environment. We believe e-peas is ideally positioned to support sensor deployment at scale in the industrial environment as its highly efficient low-power technology enable wireless and battery-less sensors," says Matthieu Repellin, Investment Partner with Airbus Ventures.