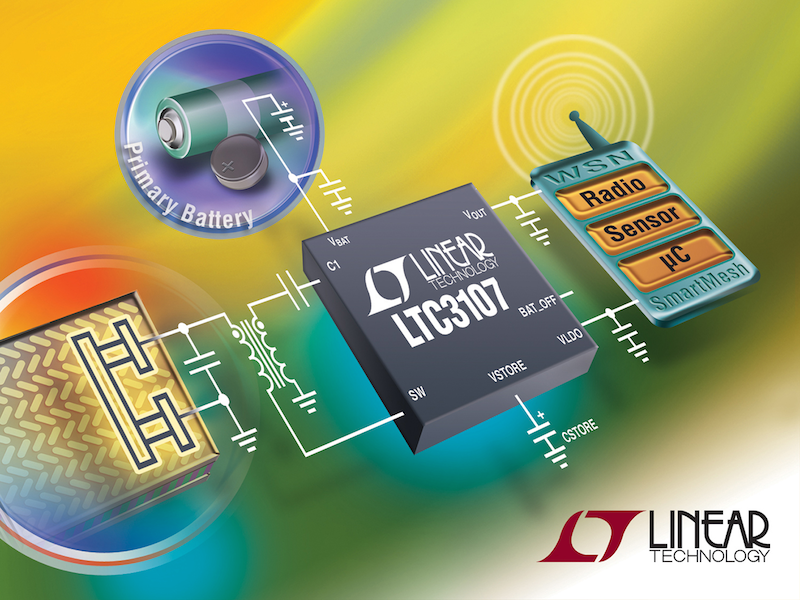 Linear Technology announced the LTC3107 highly-integrated DC/DC converter, designed to extend the life of a primary battery in low power wireless system networks (WSNs). The LTC3107 combines energy harvesting and power management capability with a primary battery cell to extend the battery’s usable lifetime. The LTC3107 harvests energy from thermoelectric generators (TEGs) and thermopiles when these sources are available, storing excess power in a storage capacitor and seamlessly transitioning to the primary cell to power a wireless sensor node when harvested power is unavailable.

The LTC3107’s internal boost converter, combined with a small step-up transformer, harvests energy from input voltages as low as 20mV, commonly found from sources such as TEGs and thermopiles, and delivers an output which tracks the battery voltage. An additional 2.2V LDO output provides power to an external microprocessor. If harvested energy is not available, the system is powered directly from the battery, requiring only 6µA. The combination of a small step-up transformer, 3mm x 3mm package and minimal external components ensures a highly compact solution footprint.

The LTC3107EDD is offered in a 3mm x 3mm 10-lead DFN package, priced starting at $2.95 each for 1,000-piece quantities. An industrial grade version, the LTC3107IDD, is guaranteed to operate over the -40°C to 125°C operating junction temperature range and is priced starting at $3.45 each in 1,000-piece quantities. Both versions are available from stock.