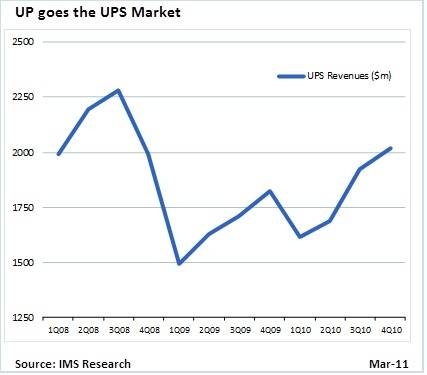 The global market for Uninterruptible Power Supplies (UPS) continues to recover swiftly from the economic downturn, as revenues in Q4 2010 were 10.8% higher than the same period in 2009. Data from IMS Research's continuing analysis of the market shows that the second half of 2010 grew twice as fast as the first, helping to push the total annual value past $7 billion. IMS Research predicts demand for UPS to return to pre-recessionary levels by 2012. Jason dePreaux, a Senior Analyst with IMS Research, is cautiously optimistic that a sustained recovery has taken hold. "Spending on critical power upgrades such as UPS has come back, notably in the small and medium business segment where power requirements are lower and projects are less capital intensive." dePreaux adds, "big data-center jobs also appear to be coming back; though this sector is highly dependent on the availability of credit to move forward with major upgrades or new construction." Critical power protection is a big business, as digital information becomes ubiquitous and sensitive for business operations. At its peak in 2008, sales of UPS earned suppliers over $8 billion, half of which went to industry heavyweights Schneider Electric, Eaton, and Emerson Network Power. IMS Research's projections for key markets suggest that the industry will be back to a 2008-like clip by 2012, in part because of the developing markets in the "BRIC" nations of Brazil, Russia, India and China. As market conditions improve, dePreaux notes some of the challenges the industry will face this year. "UPS vendors will have to skillfully manage shortages of critical components like IGBTs. In addition, rising raw material and labor costs in Asia are squeezing margins and forcing price hikes to be made, though suppliers so far are reluctant to introduce steep increases on a still wary market." IMS Research's recent study of the market has also revealed: