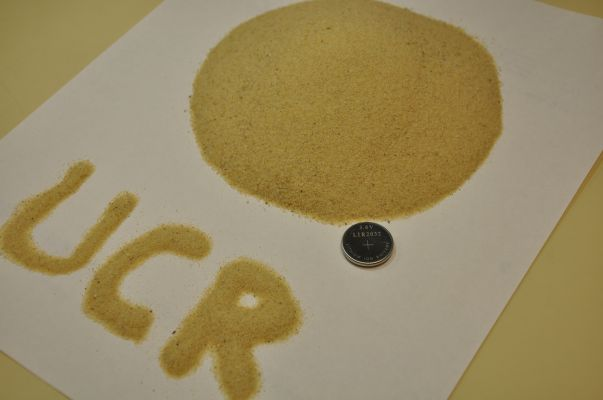 Researchers at the University of California, Riverside’s Bourns College of Engineering have created a lithium ion battery that outperforms the current industry standard by three times. The key material: sand. Yes, sand.

The idea came to Favors six months ago. He was relaxing on the beach after surfing in San Clemente, Calif. when he picked up some sand, took a close look at it and saw it was made up primarily of quartz, or silicon dioxide.

His research is centered on building better lithium ion batteries, primarily for personal electronics and electric vehicles. He is focused on the anode, or negative side of the battery. Graphite is the current standard material for the anode, but as electronics have become more powerful graphite’s ability to be improved has been virtually tapped out.

Researchers are now focused on using silicon at the nanoscale, or billionths of a meter, level as a replacement for graphite. The problem with nanoscale silicon is that it degrades quickly and is hard to produce in large quantities.

Favors set out to solve both these problems. He researched sand to find a spot in the United States where it is found with a high percentage of quartz. That took him to the Cedar Creek Reservoir, east of Dallas, where he grew up.

Sand in hand, he came back to the lab at UC Riverside and milled it down to the nanometer scale, followed by a series of purification steps changing its color from brown to bright white, similar in color and texture to powdered sugar.

After that, he ground salt and magnesium, both very common elements found dissolved in sea water into the purified quartz. The resulting powder was then heated. With the salt acting as a heat absorber, the magnesium worked to remove the oxygen from the quartz, resulting in pure silicon.

The Ozkan team was pleased with how the process went. And they also encountered an added positive surprise. The pure nano-silicon formed in a very porous 3-D silicon sponge like consistency. That porosity has proved to be the key to improving the performance of the batteries built with the nano-silicon.

The improved performance could mean increasing the expected lifespan of silicon based electric vehicle batteries up to three times or more, which would be significant for consumers, considering replacement batteries cost thousands of dollars. The energy density is more than three times higher than that of traditional graphite based anodes, which means cell phones and tablets could last three times longer between charges.

The findings were just published in a paper, “Scalable Synthesis of Nano-Silicon from Beach Sand for Long Cycle Life Li-ion Batteries,” in the journal Nature Scientific Reports. In addition to Favors and the Ozkan’s, authors were: Wei Wang, Hamed Hosseini Bay, Zafer Mutlu, Kazi Ahmed and Chueh Liu. All five are graduate students working in the Ozkan’s labs.

Now, the Ozkan team is trying to produce larger quantities of the nano-silicon beach sand and is planning to move from coin-size batteries to pouch-size batteries that are used in cell phones.

The research is supported by Temiz Energy Technologies. The UCR Office of Technology Commercialization has filed patents for inventions reported in the research paper.