VACUUMSCHMELZE adds to its sophisticated sensor portfolio at PCIM 2015 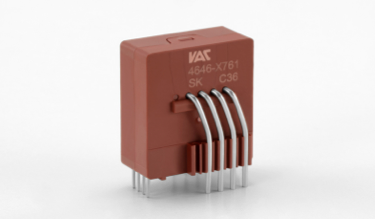 At this year’s PCIM in Nuremberg (held from 19th – 21st May), VACUUMSCHMELZE (VAC) will again present its comprehensive portfolio of sensors. The company’s stand, No. 119 in Hall 7, will contain proven products in addition to debuting DI sensors designed specifically for electric vehicle charging cables, as well as new models for higher rated current levels up to 85 A.

VACUUMSCHMELZE current sensors, unlike conventional Hall-effect sensors, use a VAC-developed magnetic field probe of cobalt-based amorphous alloy as a zero-field detector, which offers distinct benefits such as minimal offset current and negligible long-term drift. Since offset and linearity error are practically temperature-independent, these current sensors deliver reliable and ultra-precise readings in a wide variety of environments and operating conditions.

The new 4646-X7xx range of current sensors for PCB mounting are largely identical to VAC's highly successful ultra-compact 4646-X6xx range, but feature higher clearance and creepage distances that enable higher system and operating voltages to be used (600 V / 1020 V as per EN 61800). Current density is reduced by the use of four current bars instead of three, also allowing users more options for parallel and series connection, so that measurement ranges can be tailored to the specific application.

All feature a test current winding integrated into the sensor housing. New models for higher rated currents (up to 85 A) can also be designed for higher residual currents (e.g. I∆N = 1000 mA).
The field of electric vehicle charging requires differential current sensors that comply with IEC 62752 for charger cables (In Cable Control Boxes) and wall chargers for garages (Wall Boxes). The devices must be capable of precisely measuring residual DC current as low as 6 mA, and have high mechanical and electrical durability. VAC will present a new differential current sensor that meets all these specifications.

As current trends continue to move towards increasingly high-power applications in central inverters, demand for devices capable of detecting increasingly high current levels is growing. In response to this need, VAC has advanced the superior functional principle of its current sensor and developed high-current sensors for currents of 1000 Arms with a measurement range of up to 2500 A.

Compared to existing devices, VAC's solution offers the hallmark advantages of VAC sensors, including high measurement precision and stability, broad measurement range and outstanding dynamic properties, as well as low sensor power consumption thanks to a PWM driver for the compensation current. The wide primary conductor opening enhances flexibility for the user when connecting the primary conductor.