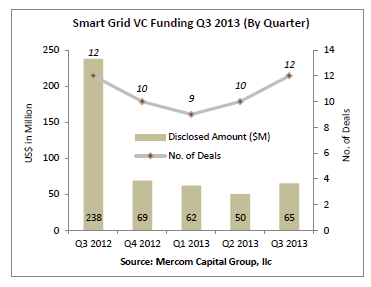 Mercom Capital, a clean energy communications and consulting firm, released its report on funding and mergers and acquisitions (M&A) activity for the smart grid sector for the third quarter of 2013. Smart grid venture capital (VC) funding in Q3 2013 totaled $65 million in 12 deals compared to $50 million in 10 deals in Q2 2013. VC funding in the sector has remained flat at this level over the last eight quarters, with the exception of Q3 2012 when $238 million was raised. Total corporate funding in the sector was $129 million, including the $64 million raised in an IPO. "Funding was slightly up this quarter. We also saw a rare IPO this quarter," commented Raj Prabhu, CEO of Mercom Capital Group. The Top 5 VC deals were led by Space-Time Insight, which raised $20 million from London-based private equity fund Zouk Capital, which joined current investors Opus Capital Ventures, EnerTech Capital and Novus Energy Partners. On-Ramp Wireless raised $15 million from new investor Enbridge along with existing investors Third Wave Ventures and Energy Technology Ventures. This brings the total amount raised in its Series C round to $31 million. Varentec raised $8 million from Bill Gates and Khosla Ventures. This was a new addition to Bill Gates' collection of energy investments. Bidgely raised $5 million also from Khosla Ventures; and WaterSmart raised $4.5 million from Physic Ventures, Draper Fisher Jurvetson, Apsara Capital and The Westly Group. Like the previous quarter, home and building automation companies received the most funding with $36 million in seven deals followed by grid optimization companies with $20 million in one deal. There were four M&A transactions in Q3. Only one transaction, Schneider Electric's acquisition of Invensys for $5.2 billion, was disclosed. This is Schneider Electric's sixth smart grid acquisition. The third quarter also saw a successful exit in the IPO of Control4, a provider of automation and control solutions for the connected home, which raised $64 million. Mercom Capital