Video surveillance growth to exceed 10% in 2015 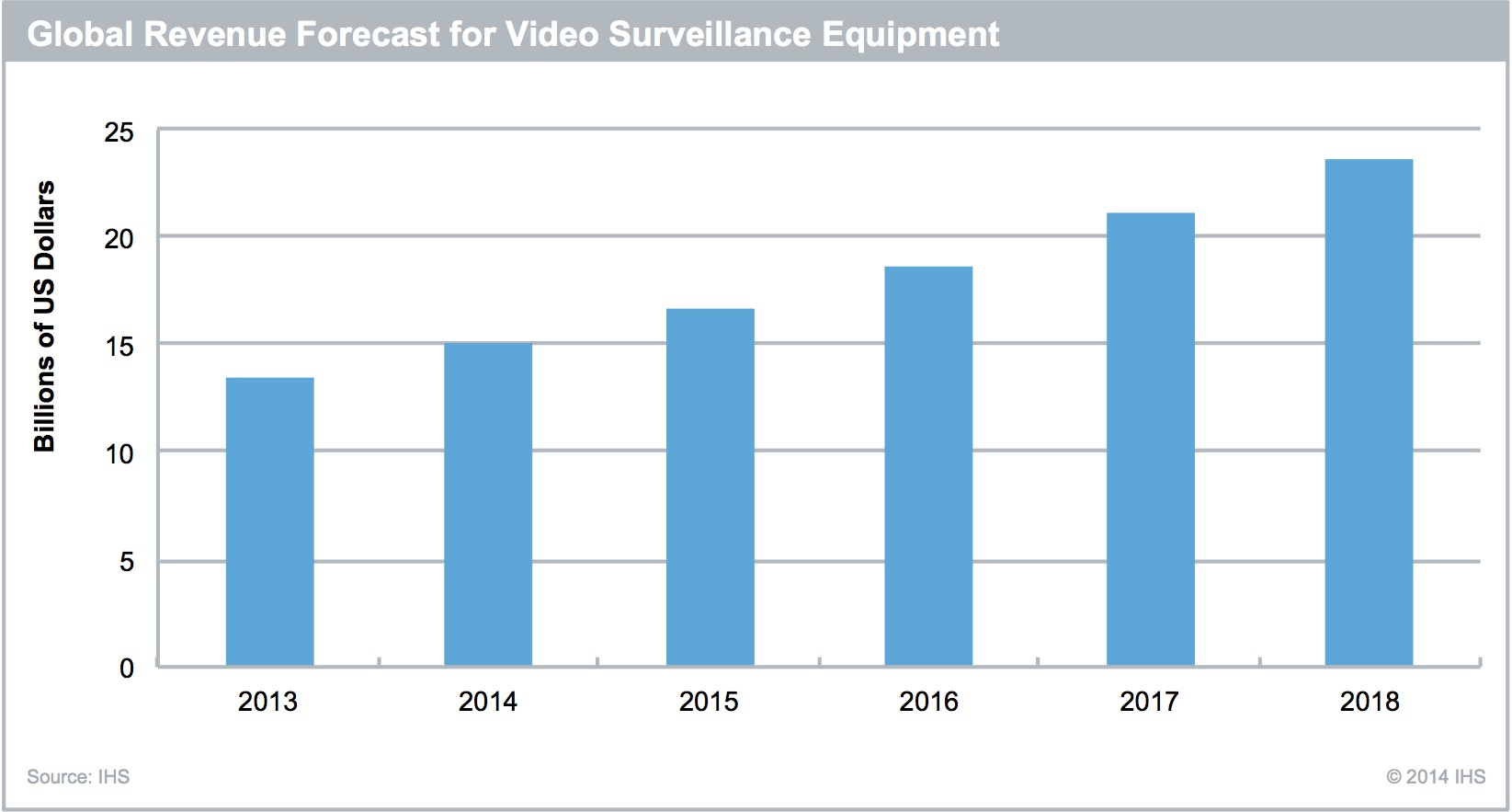 The global video surveillance industry can defy conventional market logic, resist product commoditization and still grow by more than 10 percent in 2015, according to a new white paper from IHS. The global market for video surveillance equipment was worth an estimated $15.0 billion by the end of 2014, up from $13.5 billion in 2013. By 2018, worldwide revenue will reach a projected $23.6 billion, as shown in the attached figure, equivalent to a five-year compound annual growth rate of 12 percent.

“The year 2014 has been one of the most interesting—and disruptive—in recent memory for both the professional and consumer video surveillance industries,” said Jon Cropley, principal analyst for video surveillance and security services for IHS. “A sharp decline in the cost of semiconductor components has ushered in a new era of price competition and the competitive landscape has shifted, with merger-and-acquisition activity affecting some of the leading global product and software vendors.”

Even so, the video surveillance industry can sustain this level of fragmented supply base and overall revenue growth for a number of reasons, such as brand recognition, subtle differences in end-user requirements among geographical locations and the continued differentiation of products, as with the use of embedded analytics, for example.

Differentiation will be a key market driver for almost every equipment vendor, distributor and integrator active in the video surveillance market over the next couple of years. This trend represents the first of 10 that IHS has predicted for the video surveillance industry in 2015. The remaining trends include:

Shipments of high-definition closed-circuit televisions (HD CCTV) cameras are projected to have hit over 4 million units in 2014, climbing from just 1 million units in 2013. Led by the strong performance of technologies such as composite video interface (CVI), analog high-definition (AHD) and transport video interface (TVI), 2015 will see the analog portion of the market far outsell digital, serial digital interface (SDI)-type solutions. However, fierce price competition and small incremental product upgrades are expected throughout the year.

H.265 was one of the most popular topics at the Security China Show held in Beijing in October 2014, marking a shift in cutting-edge video surveillance. In 2015 China will emerge as a leading region in product development, instead of the market being driven primarily from European and North American research and development (R&D) centers. Some leading Chinese companies now have the world’s largest teams devoted to video surveillance R&D. With complete product portfolios and cost-competitive-qualified products, more Chinese suppliers are also seeking opportunities in the global landscape, gaining share in non-domestic markets.

Increasing numbers of traditional IT vendors are taking note of the opportunities in video surveillance, and the migration from analog to network surveillance cameras has changed the way many security systems are conceived, built and managed. The global video surveillance equipment and storage market is forecast to be worth over $28 billion by 2018.

The consumer and do-it-yourself (DIY) video surveillance market, which comprises equipment sold through in-store or online retailers, was worth $953.4 million globally in 2013. Small business as well as commercial end users accounted for 47 percent of the $953.4 million total in global consumer and DIY market revenue in 2013. IHS expects to see more video surveillance vendors in the professional—not consumer—category taking an interest in this market in 2015, in order to fill out the low end of their product offerings.

Trials of body-worn cameras as part of video surveillance systems for law enforcement have been ongoing during 2014, but 2015 is expected to be the year that firm orders and long-term partnerships are made. Body-worn cameras are not just useful as part of an overall video surveillance solution, they can also be part of a political solution in helping to promote faith in local law enforcement officers.

Embedded vision—the combination of embedded systems and computer vision—will have new implications in Advanced Driver Assistance Systems (ADAS) in the automotive industry, with innovations in ADAS filtering back into the video surveillance industry.