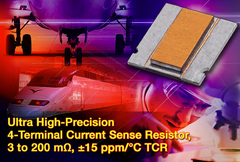 Vishay Precision Group announced that its Vishay Foil Resistors brand (VFR) has expanded the CSM3637P ultra-high-precision, surface-mount, four-terminal current sense resistor with an increased resistance range to 200 mΩ. For power supplies, DC/DC and DC/AC converters, switching power supplies, and battery charging circuits, the device combines its increased resistance range with a high power rating of 3 W to 5 W, load-life stability of ±0.2% at +70°C for 2,000 hours at rated power, and TCR to ±15 ppm/°C maximum.

Built on a proprietary processing technique that produces extremely low resistance values and improved stability, the CSM3637P features an all-welded construction composed of a Bulk Metal® resistive element with welded copper terminations. The resistor's high 3 W to 5 W rating is enabled by an integral heat sink installed on top of the resistive element, allowing for better heat dissipation. The device offers a maximum current up to 40 A, short-time overload of ±0.2% typical, very low inductance of 0.5 nH, and a resistance range from 3 mΩ to 200 mΩ with tolerances to ±0.1%. Any resistance value within this range is available with no additional cost or lead time effect.

"Current sense resistors are core passive components in analog circuits for demanding power applications," said Yuval Hernik, senior director of application engineering for VFR. "The devices measure the voltage drop across a resistive element created by the current through that element. In doing this, there are five issues commonly associated with inaccurate measurement: connection errors, external and internal temperature errors, frequency, load-life stability, and thermal EMF. The CSM3637P is designed to address all of these issues while meeting the increased demand we've seen for four-terminal configurations over the past few months. The combined materials and four-terminal construction of the CSM model reduce solder joint stress and the stress due to temperature coefficient of expansion (TCE) differences between the PCB and element."

The CSM3637P offers low TCR of ±15 ppm/°C from 3 mΩ to 100 mΩ and ±25 ppm/°C from 100 mΩ to 200 mΩ, and excellent frequency response to 50 MHz. The device's low TCR reduces errors due to temperature changes, thereby reducing a major source of uncertainty in current measurement. The CSM3637P thus provides accuracy and repeatability, even for systems that need to work in extremely high temperatures or radiation-rich environments, including down-hole oil exploration and well logging equipment or the deep-sea underwater repeaters used for cross-ocean communications.

The CSM3637P offers a low thermal EMF of less than 3 μV/°C, enabled by a design in which the welded terminals make intimate contact with the chip and thus minimize temperature differentials. This construction reduces the "battery effect" or parasitic voltage exhibited by most current-sense resistors while protecting pure current-to-voltage conversion from such interference in DC applications.

The stability of the resistor can be further enhanced by post-manufacturing operations (PMOs) expressly developed for Bulk Metal Foil resistors, which include temperature cycling, short-time overload, and accelerated load life.

Samples and production quantities of the CSM3637P are available now, with lead times of five working days for samples and eight weeks for standard orders. Pricing for U.S. delivery starts at $6.32.