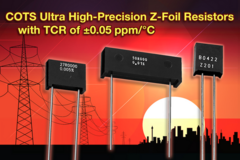 The Z Series now offers a resistance range from 5 Ω to 600 kΩ for high-precision industrial, alternative energy, military, aerospace, medical, down-hole, shunt calibration, and RTD calibration and simulation. Any conceivable ohmic value within this range, to six digits, is available with no additional cost or lead time effect. Total accumulated change in resistance end of life (EOL) for the devices is <0.1%, or better with post manufacturing operations (PMO). The resistors feature rated power to 1 W at +125°C, a rise time of 1 ns with effectively no ringing, current noise of ≤0.010 μVrms/V of applied voltage (<-40 dB), thermal EMF of 0.05 μV/°C typical, and a voltage coefficient of <0.1 ppm/V.

"With the increase in demand for smaller and smaller end products, there has been a corresponding need for precision resistors to handle greater power densities. For many designers, this has meant utilizing surface-mount (SMD) chip resistors whenever possible. However, these devices have a number of trade-offs in high-precision applications," said Yuval Hernik, senior director of application engineering for VFR.

"SMD resistors run hotter than through-hole parts due to their power density, and this excess heat degrades long-term stability when operating at higher temperatures. In addition, board flex stresses may cause SMD chips to crack or delaminate from the board. In high-precision applications, the best choice is often a through-hole resistor specifically designed to provide higher resistance values and power, tighter tolerances, and better long-term stability. The Z Series plug-in configuration provides all this while using less board space than traditional through-hole configurations."

Z Series molded precision resistors are configured in a rectangular block with through-hole leads extending through the bottom surface to minimize board space, while stand-offs allow for reliable cleaning underneath. Unlike SMD chip resistors, the board pads and solder attachment do not extend beyond the resistor's own footprint. While some through-hole resistors require added height for stress-relieving bends in the leads, VFR devices feature a built-in stress relief system.

For harsh environments, the devices' outer molded shell offers much greater resistance to moisture and contaminates than chip resistors, making them ideal for conditions such as the extreme temperatures and radiation-rich environments of down-hole oil well logging applications; in the frigid arctic; under the sea; or in deep space. In addition, encapsulated molded foil resistors have a greater surface area, enabling higher resistor values on the vertical surface, very tight tolerances, and reduced inductance, capacitance, and reactance.

"As much as we strive for device miniaturization, a tightly packed board isn't necessarily the answer in precision applications," added Hernik. "For example, if a resistor is allowed to touch the PCB, the result can be microphonic noise. This is a particular risk for surface-mount resistors that are subjected to compression and expansion, with the PCB acting as a sound diaphragm. This effect is another reason to avoid using surface-mount technology for feedback components. The better choice is through-hole parts with the legs configured to absorb the deflection from the surface of the mounting board."

Samples and production quantities of the enhanced Z Series resistors are available now, with lead times of five days for samples and eight weeks for standard orders. Pricing for U.S. delivery only begins at $3.83.